After releasing the uber cheap Fitrist into the market, Intex has released an upgraded version of the device. This time around though, the company has added a feature that has become a must for any fitness tracker, an optical heart rate tracker. At Rs. 1,999, the Intex Fitrist Cardio is priced low enough to be taken into consideration for first time buyers. However, it has to contend with Xiaomi's Mi Band 2 and the new Lenovo HW01. Let's see how this fitness tracker stacks up. 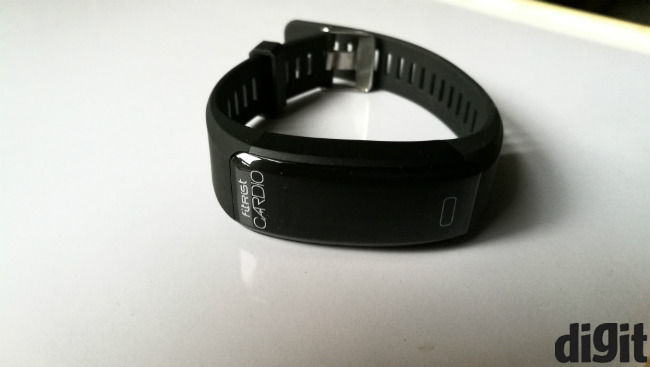 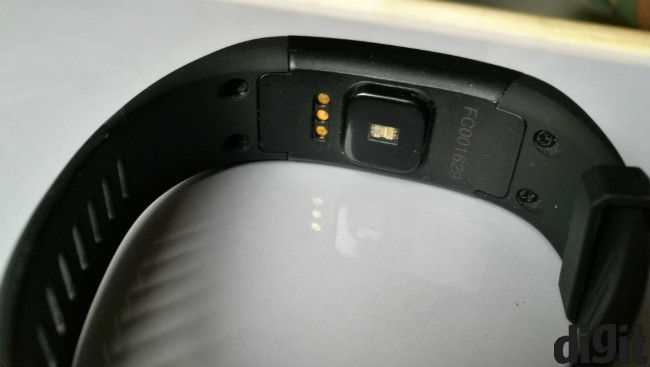 Moving on, like most other fitness trackers, the Intex Fitrist Cardio sports a bracelet-like design that I personally like. The central module sports an OLED display and the device has no physical buttons. Instead, it uses a single touch sensitive button to navigate. Underneath is the heart rate sensor and the connectors that are used to charge the device. The rubber straps sit flush with the device and are secured using a traditional buckle system.

At first glance, I thought that the pronounced heart rate tracker would make the device very uncomfortable to wear. I was wrong and didn’t feel the bump on my wrist during everyday use. The fact that the device itself weighs about 23gm definitely helps make it hardly noticeable when you wear it. What was uncomfortable though was the metal buckle. The sharp edges of the buckle dig into the skin, so I had to wear the device a bit loose in order for it to be comfortable. 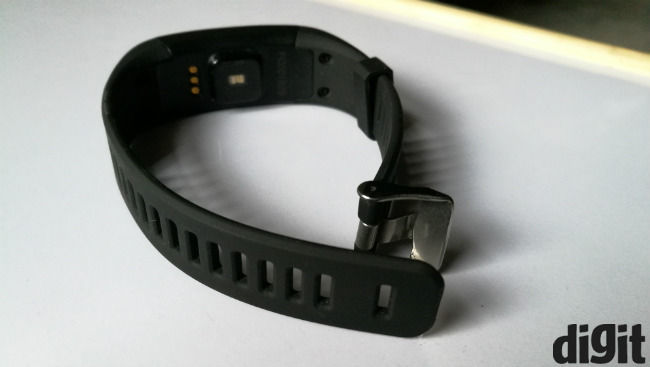 The wearable sports a monochrome OLED display that is pretty useful in increasing battery life. However, sunlight visibility is poor and there isn’t any way to adjust brightness. There also doesn't seem to be a way to rotate the display for anyone who wears the Fitrist Cardio on their right hand. So, you will have to wear it on the left. By default, the twist to wake feature is turned off, but can be activated by heading over to the Settings option in the app (more on that in a bit).

The wearable can also vibrate when you get calls, SMS or WhatsApp. However, while names or phone numbers during calls are mentioned, a WhatsApp notification only shows ‘WhatsApp’ on the display. It would have been nice to read the message there or at least know who it is from. But Intex seems to be lacking good app support right now. 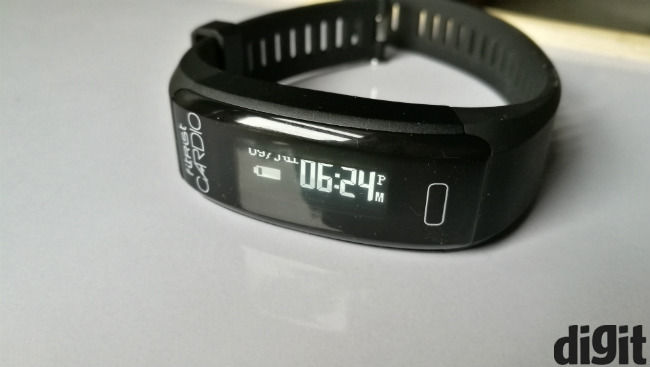 The Intex Fitrist Cardio sports a single button and that is used to do everything, from switching between screens to activating modes. Tapping on the button switches between the screens, while pressing and holding it activates a mode. For example, to start Sports Mode, tap the button till you reach the appropriate screen and then turn it on by pressing and holding the button. Pressing the button after that turns that mode off. A similar method is used to turn the heart rate tracker on and off. The wearable is also capable of recording sleep automatically.

It should be noted that while other fitness trackers turn the heart rate on for continuous monitoring when the Sport Mode is turned on, the Fitrist Cardio does not. So the only readings you get are a step counter and the calories being burned. While you can track heart rate, it is done separately via another screen. And that pretty much kills the whole idea behind having a heart rate tracker on your hand. You should need a tracker during exercise or sports, and that won't happen here.

Other features of the wearable include the ability to take photos. However, the whole thing is more trouble than it's worth in my books. To use it, you open the Fitrist Cardio app, open the menu, and then select the camera option. Then you select the camera screen on your watch and press and hold the touch button on it to take a picture. It’s easier to just take a picture with your phone. Also, your phone's default camera app doesn't open, which many may not like.

As in most fitness trackers, the app is where everything happens. The Fitrist Cardio app is where you check out all your stats and control settings. The main screen shows you the steps you've taken, while swiping takes you through other statistics, such as the details about your Run information (when sport mode is on), sleep tracker and Heart Rate Information. Tapping on the center of the Run or Heart Rate Information screen shows you additional information.

The amount of information you get is pretty limited and is one of my gripes with the device. You only get the date, length of activity, steps taken and calories burned. The fact that the heart rate sensor is not on during Sport Mode limits the information I get. I would have liked to know my heart rate during a run, and learn when I was really pushing myself. Another thing to note is that the watch is clearly aimed at runners and joggers, not exercise or gym enthusiasts. I am not an avid fitness enthusiast, but I do about 10 minutes of exercise daily. The information I got was definitely not enough for me since a step count is not enough, even for me. 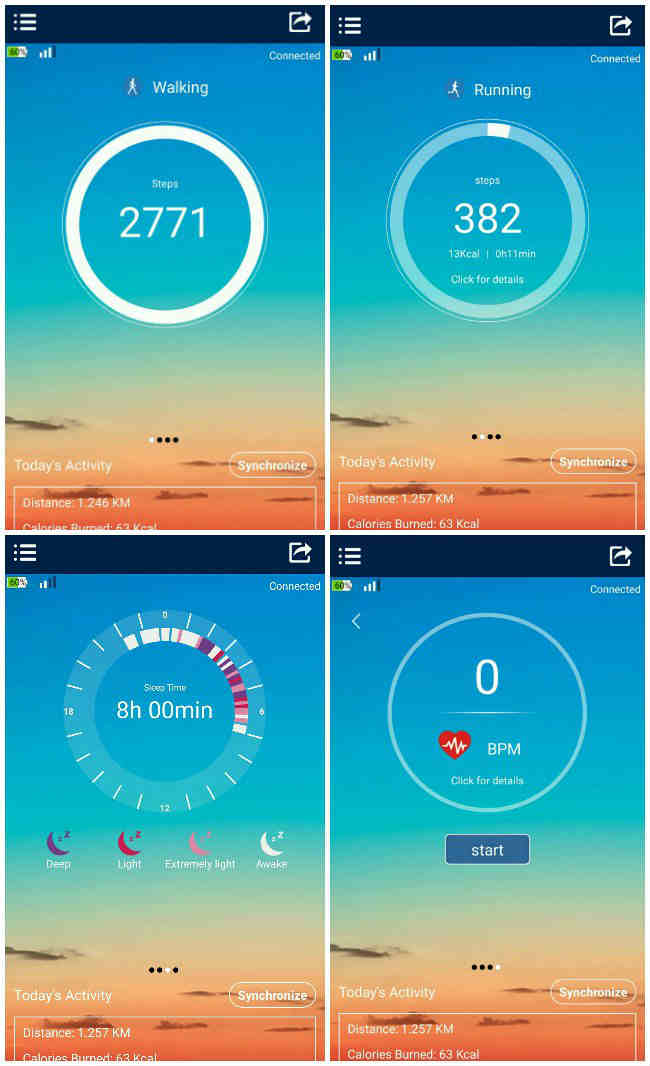 The heart rate sensor is another feature that I have my doubts about. The displayed heart rate seemed to be lower than my usual average, and double checking manually seemed to confirm my suspicions.  Also, since heart rate tracking is only done when you turn it on manually, I didn't use it most of the time. I personally feel that the heart rate tracker is being wasted here. Ideally, the tracker should be taking readings at regular intervals and of course, be on during Sport Mode.

The app is also where you set goals, alarms, select the notifications you get and check your stats over the course of the day, week, month or year. 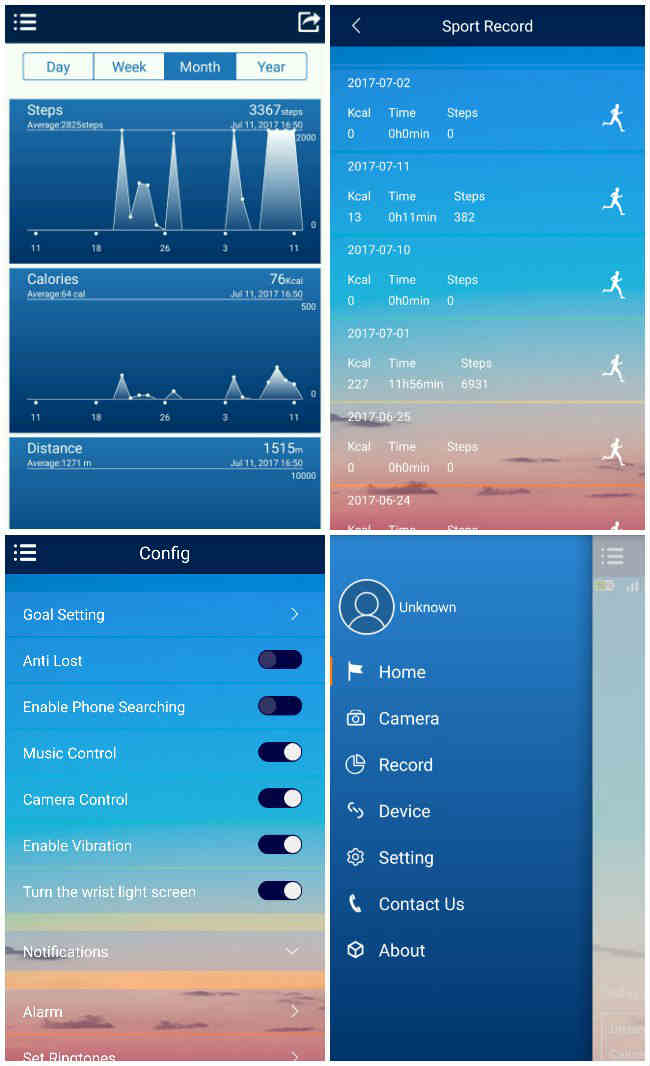 This is by far the best aspect of the Intex Fitrist Cardio. The wearable sports an 80mAh battery and can last about a week on a single charge. However, the device uses a clamp system to charge, something I personally dislike. That’s because not only do I feel the system looks unrefined, but most of the time, the clamp is made from a cheaper grade of plastic. Considering a clamp has three moving parts (two separate sections and a spring), it increases the likelihood that something may go wrong. If the hinge were to break or the spring to come loose, you won’t be able to charge the device anymore. 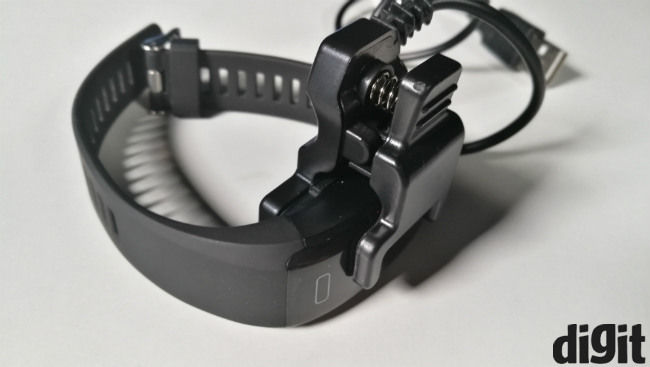 For its price, the Intex Fitrist Cardio is something that will surely appeal to many first time buyers, but only on paper. It offers very good battery life and is quite feature rich. However, they device fails to implement the heart rate tracker effectively, which is quite disappointing. It also seems to be geared towards runners, rather than those who go to the gym a lot. This is what makes it hard for me to recommend the Fitrist Cardio. For about the same price, you can check out the Lenovo HW01, which offers pretty much the same set of features as the Fitrist Cardio, but offers better implementation of the heart rate sensor and charges via a standard microUSB cable. For me, the features on the Intex Fitrist Cardio come off as gimmicks. They make the tracker seem good on paper, but the overall device is not really useful for fitness purposes.