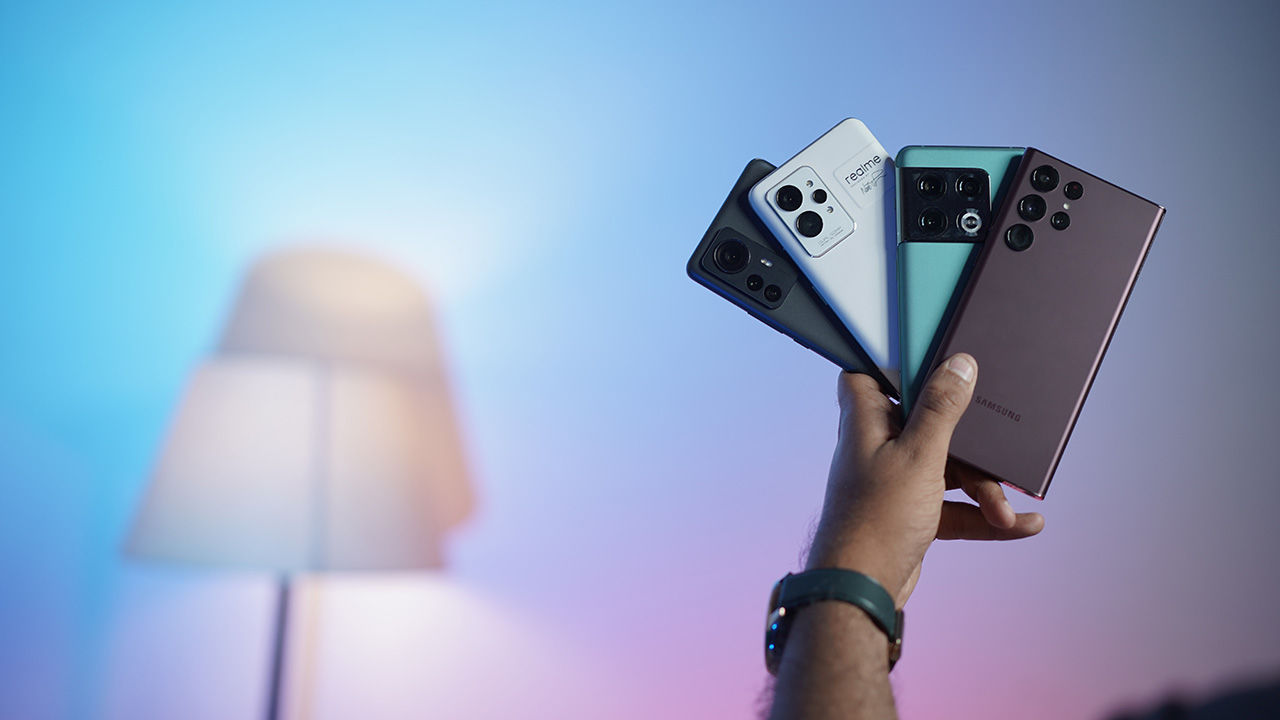 Qualcomm's been one of the biggest names in the chip-making business for years now, launching some blockbuster chipsets one after the other. While it looked like the script was going to be the same for 2022 as well, in reality, Qualcomm's been facing a lot of heat for its flagship, Snapdragon 8 Gen 1 SoC.

Yes, this is the same chipset that we've seen on top-of-the-line Android phones from the likes of Samsung, Xiaomi, OnePlus and some others. And also the one which has been getting a lot of negative coverage for the insane amount of heat it's producing compared to its previous generation flagship chipsets.

Now honestly, heat is not always a bad thing. Any chipset on a phone will create heat, which can be managed either by the chipset itself or by the phone to ensure close to optimal performance. Of the two approaches, the latter is obviously better as heat management on the chipset's end is the last resort where the chip throttles itself to prevent permanent damage to the silicon.

But it appears with the Snapdragon 8 Gen 1, heat generated by the chipset is so high that phones are not able to effectively handle it, and in turn, the chipset is throttling itself quite aggressively to keep the thermals in check. But that does not mean all Snapdragon 8 Gen 1 chipsets are facing similar throttling issues. There are phones which handle thermals relatively better than the rest.

Today, we are going to be looking at four phones – Xiaomi 12 Pro, OnePlus 10 Pro, Galaxy S22 Ultra and Realme GT 2 Pro – which can handle the thermals of the Snapdragon 8 Gen 1 the best. We will be putting these through a series of benchmarks, stress tests, and gaming scenarios to find out which of these four phones delivers the most stable and powerful performance using the new monster chip from Qualcomm. 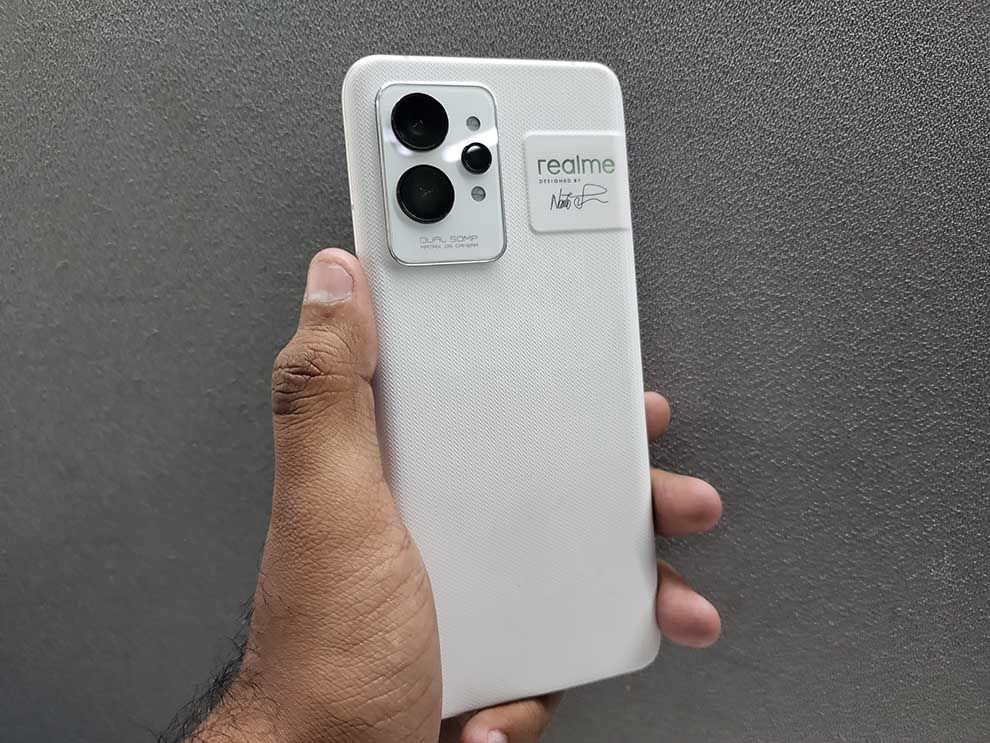 Why is the Snapdragon 8 Gen 1 overheating?

But before we get to how the Snapdragon 8 Gen 1 is overheating, it is important to understand why it's possibly doing so.

The Snapdragon 8 Gen 1 is built using Samsung's new 4nm process and features one Arm Cortex X2 core for performance, three "big" Cortex-A710 cores, and four Cortex-A510 "little" cores for high-efficiency workloads. This architecture is a serious upgrade on the one found on the Snapdragon 888 from last year, with the X2 core being 16 per cent faster, the A710 being 10 per cent faster, and the A510 being 35 per cent faster than the comparative cores found on the previous generation chip.

But with great power, comes great......heat. And from what we've seen, despite their promises, Qualcomm and Samsung have not managed to keep the heat generation on the 8 Gen 1 to acceptable levels, leading to serious chipset throttling in some cases. While it's true that phone makers can do a lot more at their end to handle the extra heat, the chipset's role in generating extra heat in the first place cannot be ignored. 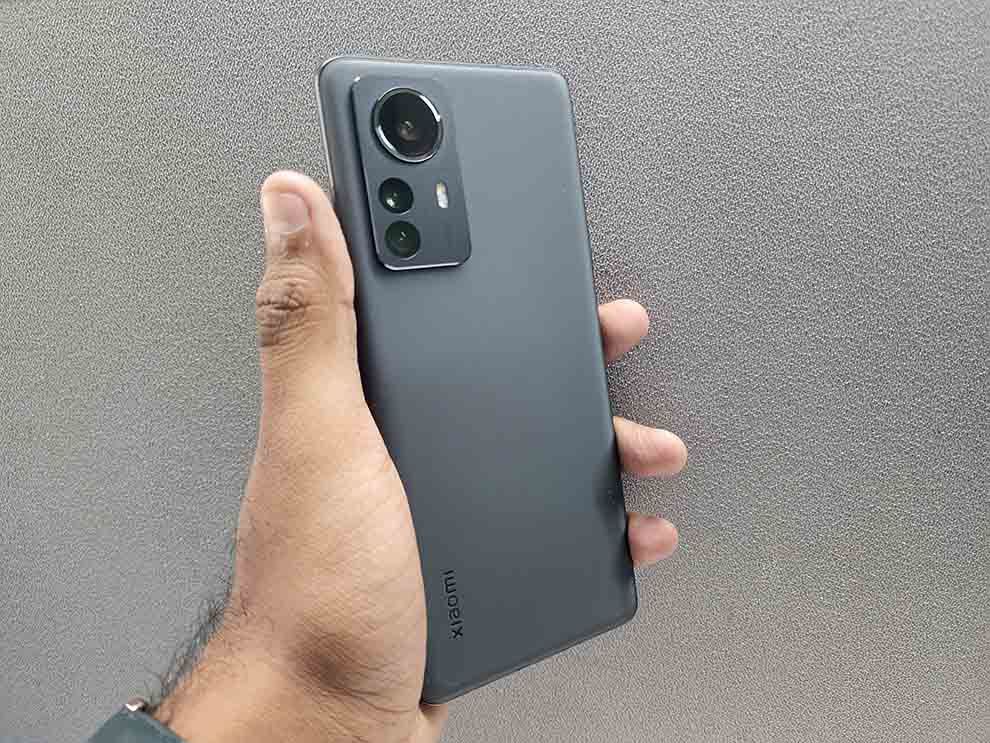 So, now that we've talked about why the Snapdragon 8 Gen 1 creates a massive amount of heat, it's important to know which of the current crop of phones handles the chipset the best.

There are a lot of factors that play a part in effectively handling extra heat at the phone's end. The presence of a big cooling chamber, and a design, as well as the use of materials that help in quick dissipation of heat, are obviously important, but an OS that's light and bloat-free also helps keep the phone's temperatures low.

While all four phones we are testing today claim to excel at every step, in reality, none of them are perfect. All four phones, including the Xiaomi 12 Pro, fail to effectively handle the extra heat that's created by the powerful chipset at hand. To test this, we did a quick surface temperature check after stress testing the phones for 30 minutes.

Of the four, we found the OnePlus 10 Pro overheating the most, as it went up to 44.6 degrees. The Xiaomi 12 Pro also ran hot, with the phone going up to 43.7 degrees. The S22 Ultra with its big cooling chamber managed to remain relatively cool, with the phone only touching the 42.8-degree mark in our thermal test. The Realme GT 2 Pro also ran hot but did manage to do a better job than the other phones on the list as it only touched a high surface temperature of 42.3 degrees.

Even though the thermals for all four phones are definitely not alarming, there is no denying the temperatures of these phones could go up to uncomfortable levels if the stress test was conducted in a setting with higher ambient temperature than the one in our test labs. But even at these levels, they are slightly higher than the highs recorded on Android flagships from last year. This metric for phones such as the S21 Ultra and the OnePlus 9 Pro was below the 40-degree mark, which is still high, but not as high as the ones we're seeing on the current generation Snapdragon flagship chipset phones.

Do the high temps affect performance?

Now to the all-important question: Do the high temperatures on these Snapdragon 8 Gen 1 phones affect real-world performance? Well, for this we pushed the three phones to the limit by running a number of benchmarks and also tested their real-world performance by playing a few games on them.

But to begin with, benchmarks and a few CPU-GPU intensive games are the only places where you'd see the chipset showing any signs of stress. For basic tasks such as browsing the internet or using apps of daily use like Twitter, Instagram and their ilk, all three phones perform equally well. There's really nothing here to differentiate them on the basis of performance and none of them misses a beat, making sure the user's interactions with the phones are smooth and lag-free.

Moving to benchmarks, we began our tests using AnTuTu where we got some interesting results. All four phones proved more than competent, handling not only the stress but also the thermals just fine in this test. However, when it came to performance, two phones from the list lagged severely behind, with the other two, clocking some seriously good numbers. 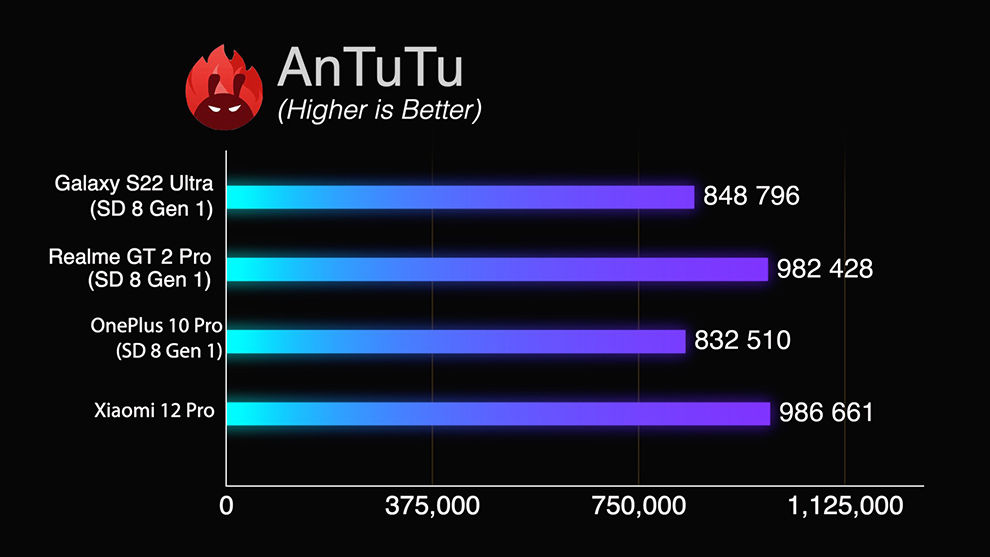 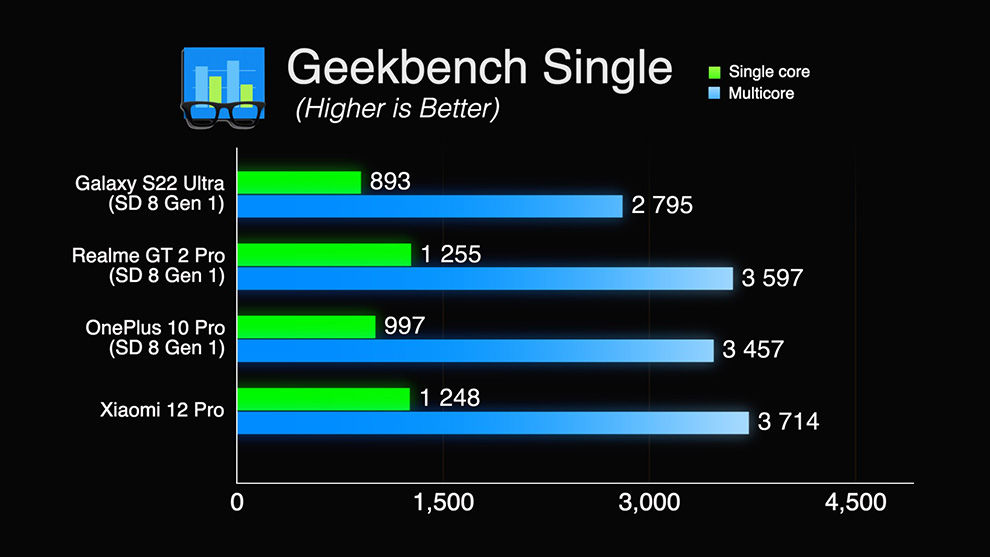 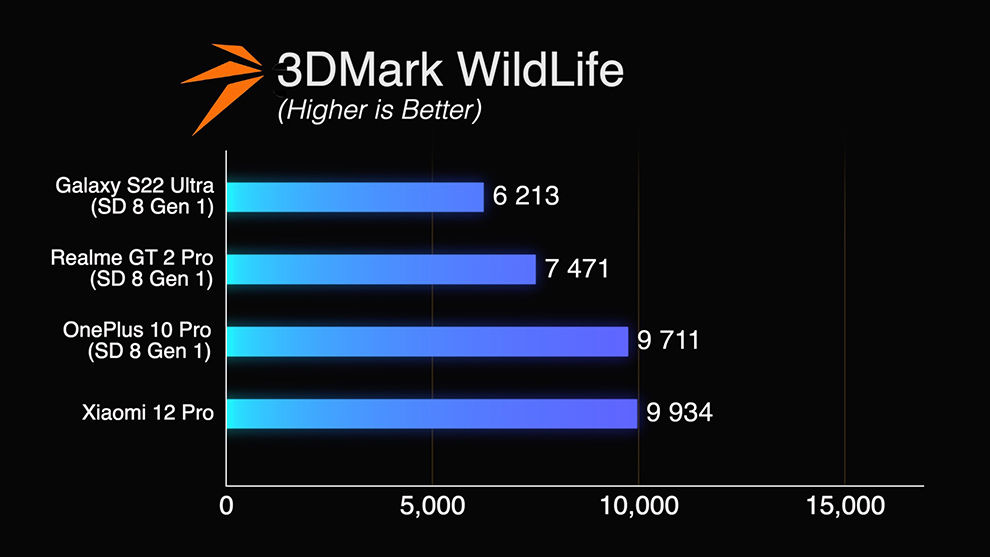 3DMark Wildlife threw up mixed results with Mi 12 Pro and OnePlus 10 Pro running away from the other two phones in the list. The Realme GT 2 Pro finished third, with the Galaxy S22 Ultra finishing last in the list. However, when it came to PCMark Wild the best results were thrown up by the Xiaomi 12 Pro which clocked 13117 points, followed by the Realme Gt 2 Pro in second place with12663 points, the OnePlus 10 Pro in third with 11050 points and Galaxy S22 Ultra ion fourth with 10842 points.

We also tested the gaming performance to see if the high thermals were having any impact here. As expected, all four phones handled graphically demanding titles such as Call of Duty Mobile and Asphalt 9 Legends just about fine. 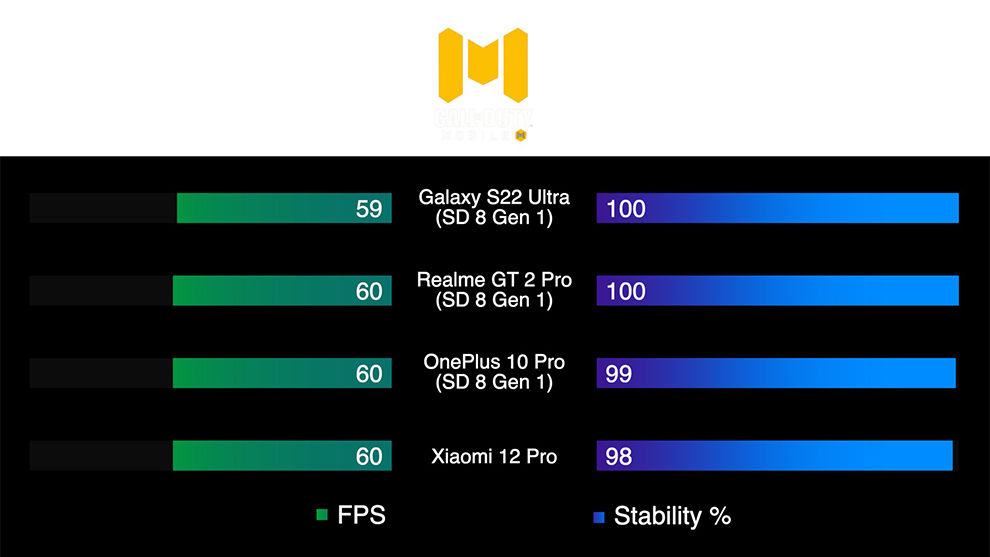 For Call of Duty Mobile, the Realme GT 2 Pro was surprisingly right at the top when it came to performance. Gamebench showed the phone ran Call of Duty Mobile at a median FPS of 60 frames and a perfect stability score of 100 per cent. This score was better than the other devices on the list, with the OnePlus 10 Pro managing to run the game at a median of 60 frames and 99 per cent frame stability. The performance of the S22 Ultra was also okay as it clocked a median FPS of 59 but at a stability of 100 per cent. The Xiaomi 12 Pro also performed well in this game, clocking a median FPS of 60 with 98 per cent frame rate stability. 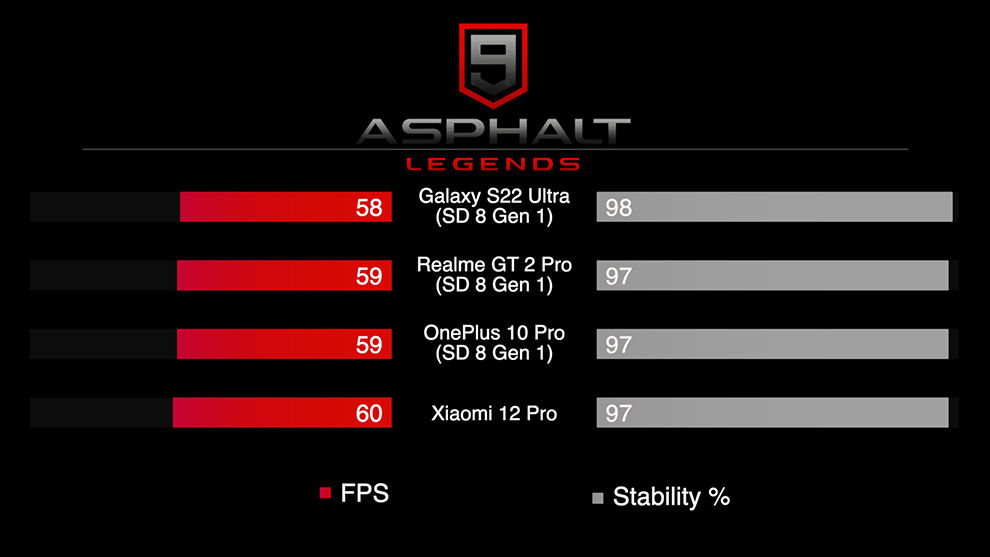 Moving on to Asphalt 9 Legends, the four phones threw up similar numbers, with none of them hitting a perfect score of a median 60 FPS at a 100 per cent stability, showing that issues remain with the Snapdragon 8 Gen 1 chipset.

To understand the numbers from the games and benchmarks, we also ran a quick 15-minute stress test to check if the performance of any of these phones was being throttled because of excessive heat generation. What we found out was a little surprising.

Despite doing really well on benchmarks and games, the Xiaomi 12 Pro was the phone that throttled the worst under stress. In the CPU Throttling Test, it throttled to about 56 per cent of its performance after just about a few minutes of use and then remained at that level for the remainder of the test.

Despite doing the worst in the benchmarks, the S22 Ultra did the best in this test, as it only throttled to 84 per cent of its performance after 14 minutes of stress testing. While this is not the best we've seen from a phone, it is good enough. Now to the all-important question: Which of these phones is the best when it comes to performance, thermals, and throttling?

As our testing proves, there is no clear winner. But if we still had to choose a winner we’d say go for the Realme GT 2 Pro or the S22 Ultra because these phones handle the heat better compared to other phones. However, in the case of the Galaxy S22 Ultra, the phone appears to be doing so by keeping a check on the performance of resource-intensive applications.

On the other hand, there is the Xiaomi 12 Pro. This is one device that’s going all out on benchmarks and stress tests, but is also generating quite a lot of heat, and is as a result throttling much faster than the other phones on the list.