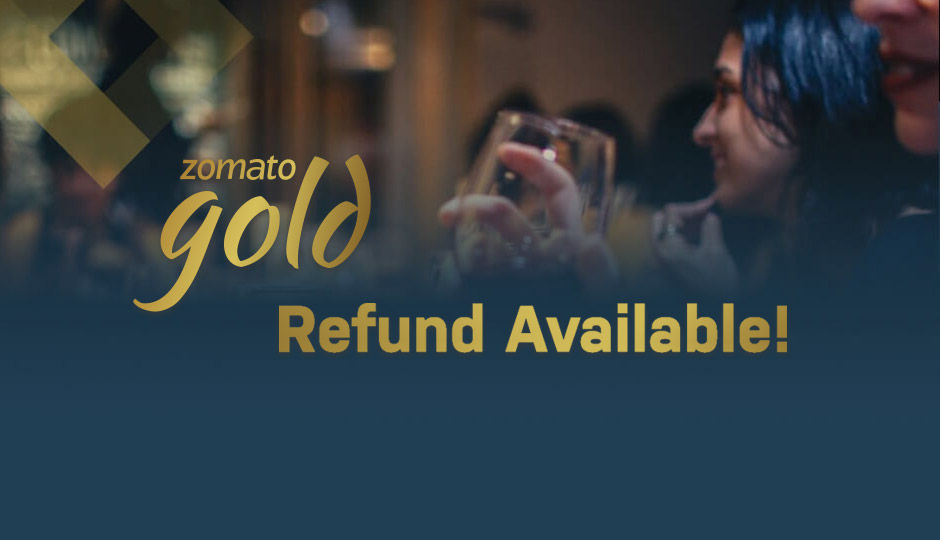 After Zomato decided to change their usage policy for Zomato Gold without any intimation to users, the company has received significant backlash. We had reached out to Zomato for clarifications but instead received an unhelpful response. After the publication of our original story, several users left comments on our Facebook and Twitter posts about the unfair move by Zomato. Various users commented on how Zomato had also misled potential customers, stating that membership would close by certain dates, but it didn’t, and instead, only got cheaper with time.

Since then, Zomato has responded to our Twitter post about their new policy stating that “Zomato Gold was only being used by everyone in very large groups - by a very small percentage of our users. To reduce the burden of such user behaviour on restaurants, we have introduced a fair usage policy. Unfortunately, because of operational constraints at restaurants, it's impossible to have a different set of T&Cs for existing and new users. We respect our customer's decision if Zomato Gold isn't for them anymore. So far, about 12 members have reached out to us for refunds and they have already been processed on a pro-rata basis.”

In their original response, Zomato refused to answer whether the company will issue refunds to unhappy customers, but the tweet from the company claims that refunds are being issued and have already been processed for some customers. We reached out to Zomato to clarify the process of refund and here is what the company spokesperson had to say "A user can drop us a mail at goldcustomersupport@zomato.com and we'll process the refund on pro-rata basis. The amount will be credited to the payment source." 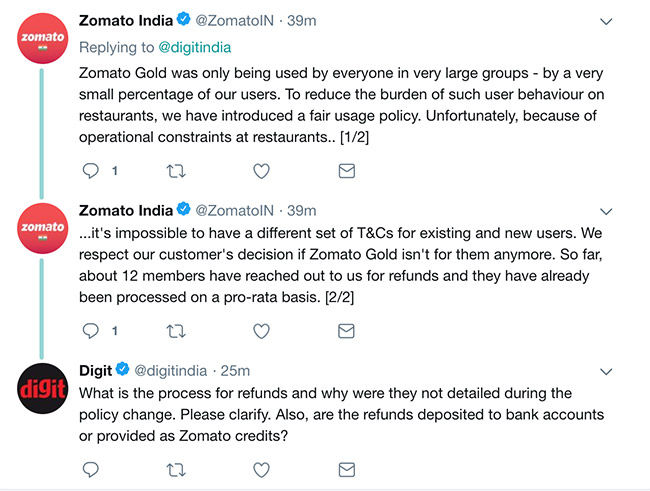 Zomato says that operationally it wasn’t feasible for them to honour the existing terms for existing users and create new terms for new users. While this may seem like a sensible constraint, it is not rocket science to be able to separate new customers from old ones. Zomato could have built a special app icon for Gold subscribers and to say that they could not figure out how to build a system to separate old and new customers is frankly a weak argument. Additionally, the company could have issued a 6-month or even 3-month notice, stating that from a certain date onwards, the terms would change. This is what Amazon did when they hiked the price of Amazon Prime subscription from Rs 499 to Rs 999, a price hike that honestly went down very well with almost every subscriber. Due notice allows users to make a choice and also settle into the impending change, however, Zomato’s move puts the financial interests of restaurants above that of their customers.

Additionally, according to Zomato’s response to our tweet, the company says that “Zomato Gold was only being used by everyone in very large groups - by a very small percentage of our users…” This statement further poses questions. Was everyone using Zomato Gold in large groups or a very small percentage of users using Zomato Gold in large groups? If it’s the former, then the company’s original statement of the policy not impacting 98.65 percent of their existing customers doesn’t hold true. If the latter is true, then how is it that such a small group of abusive users were able to impact revenues in such a massive way that it overshadowed responsible behaviour by 98.65 percent of users. Either way, Zomato’s statement just does not make sense.

What does make sense, however, is that Zomato Gold was not a sustainable product. If a restaurant has to take a 50 percent hit on their billing with no compensation, the math for profitability is extremely complicated. Just because the number of diners has increased, does not mean that profits have also gone up. Since the restaurant now has to serve more customers, they have to spend more for securing inventory, but in return, their revenue is only half of what they should be earning. So yes, it has impacted profit margins, but it is very unlikely that restaurants are making losses by being a part of the Zomato Gold program.

Lastly, it should be clarified that the problem here is not the change in policy, but the underhanded way in which it was done. After amassing a large number of users who have paid in advance, to change what is being offered so suddenly is downright deceitful. Zomato has fully exercised the flimsy cover provided to them by the ToS which states “ Zomato reserves the right to update or revise these Terms from time to time,” but in doing so, alienated a large part of their user base for such an underhanded move. Interestingly, Zomato Gold is available in Lisbon and the terms of service for that region state that all Zomato Gold members on a particular table can unlock their Gold accounts. In the region, Zomato charges roughly Rs 5,000 for a year's worth of subscription.

PM Modi wants India to have energy independence and self-reliance in its EV sector
PM Modi shares his vision for Digital India in this “Techade”: Here’s what it is
Google survey finds 6 out of 10 people are subject to misinformation daily or weekly
Indian Government to standardize charging ports for all devices in the Country
Google invites Nest owners to help in the next-generation design of the Home app
Advertisements