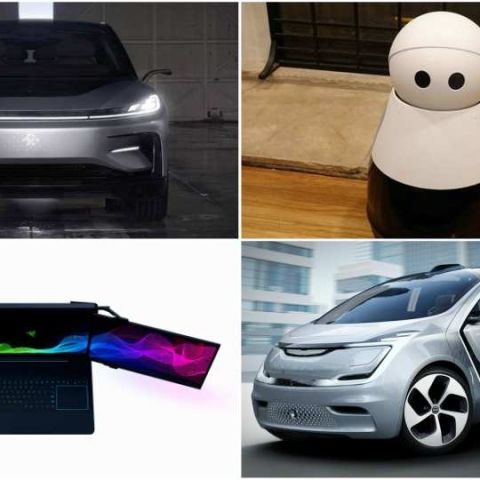 Starting with some cool robots to cars that are especially built for millennials, gaming laptops with pop-out screens and beds that can warm themselves. Here are all the funky gadgets from CES 2017, in one place.

CES 2017 has given us a whole year full of gadgets to play with and wonder upon. Starting with some cool robots, to cars that are especially built for millennials, gaming laptops with pop-out screens and beds that can warm themselves, CES has been a crazy glimpse into what technology can do in 2017. Here are all the cool videos you need, to wet your gadget appetite.

A robot that is also a nanny for your children, the Kuri can watch your place and charm your kids at the same time. The robot features a 1080p camera, dual speakers, four microphones, Wi-Fi, Bluetooth and some serious robotic capabilities. Check out the video below.

Everything Lenovo announced in one video

Lenovo announced a bunch of interesting gadgets at CES 2017, including the rebranded gaming laptops under the Legion series, new ThinkPad X1 devices and a Surface Pro 4 competitor in the form of the Miix 720. All these, in one video. Take a look

A gamer’s wet dream, Razer’s Project Valerie is the world’s first automated triple display gaming laptop. It literally has 2 extra displays that pop out to give you some more real estate and a grand gaming experience. Here’s how it unfolds.

At CES 2017, Chrysler revealed the Chrysler Portal Concept - a “fifth generation” car as the company calls it. This one is a family car, built for a family of millennials.

The Sleep Number 360 Smart Bed will offer the smartest, most effortlessly comfortable sleep of your life so that you can wake up refreshed and reborn. Or so says the company. The Sleep Number 360 is the only bed in the world with responsive air technology. Best thing is that the bed will know when you have cold feet and will automatically warm them up for that everlasting, cozy sleep.

The FF 91 electric car comes to life in this video. This is Faraday Future’s first car ever, but the problem is that it may never see the light of day. Nevertheless, the video is uber cool.

Do you want to save on your water bill? Do you spend hours under the shower not realising how much water you are wasting? Well then, you are in luck, because the HYDRAO Smart Shower is here to educate you about water conservation. The smart shower uses a combination of LED lights to inform users when they are being wasteful with water. Cool concept right?

A great learning tool for kids, the LEGO Boost combines LEGOs and technology to create programmable bricks that run on a set of motors. Essentially, kids can learn how to code and make robots using LEGOs at the same time. The accompnying app can also record voice effects, making these robots speak. Isn’t that awesome?

Just attach this bar to your MacBook Air and turn the boring display into a touch screen. The bar fits perfectly under the display, with a USB connector plugged into any standard MacBook USB port.

Amongst the various smart car unveilings at CES 2017 , Honda showcased something really amazing - The Honda Riding Assist Motorcycle. It is new self-balancing bike, which to the disbelief of many can stand on its own.

Alternatives to CamScanner for digitising documents and photos