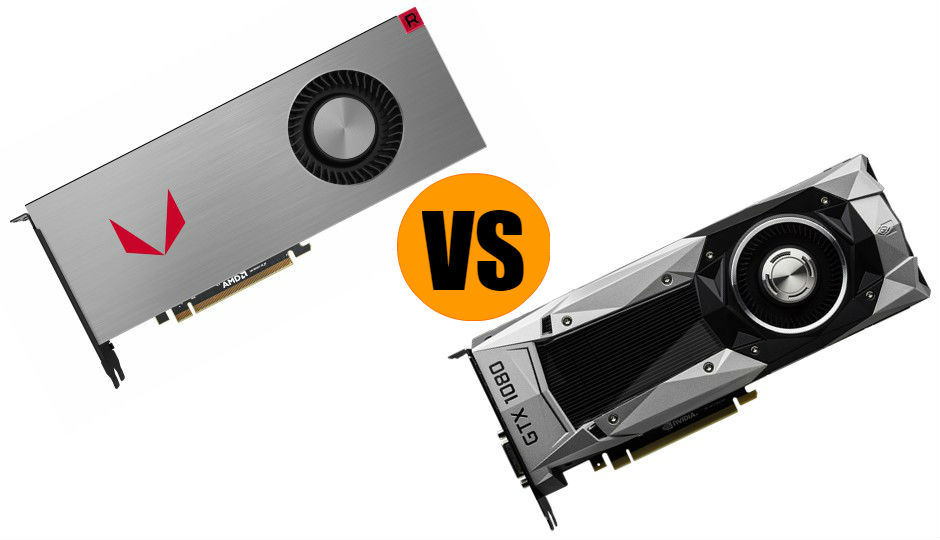 AMD’s re-entry into the CPU and GPU space have been welcome with open arms. The Zen-based Ryzen CPUs have ignited the flames of competition once again in the CPU space between Intel and AMD. And on the side, the Radeon Technologies Group (RTG) has done the same with their Radeon RX Vega GPUs. While RTG doesn’t have as many aftermarket SKUs as NVIDIA does, we still have more than enough. And both companies faced stock issues at the onset of their respective launches, however, the controversy around RX Vega was a lot more pronounced than what the 10-series flagships from NVIDIA managed to evoke. However, it’s been more than a year since NVIDIA’s 10-series came out and barely two months since the Vega GPUs came out. Prima facie, it would appear Vega didn’t up the ante. However, matching performance is a significant step in the right direction as well. Let’s take a look at the GPUs we’ll be comparing today.

The two GPUs have vastly different microarchitectures and we can’t simply compare them against each other with respect to the individual components at the silicon level. That would be sacrilege, so we’re simply stating elements of the architecture that are the most similar to provide a perspective from the get go. The Vega 64 has 64 Compute Units that hold a total of 4096 stream processors and the GTX 1080 has 20 Streaming Multiprocessors which hold 2560 CUDA cores. These are the essential units of computation within GPUs. The Vega 64 GPU has significantly higher memory bus width (2048-bit) while the GTX 1080 uses a 256-bit bus since it has fewer cores that need to simultaneously communicate. AMD’s GPU is built on Global Foundaries’ 14nm process node while NVIDIA uses the TSMC 16nm node. It would appear AMD has the more power-efficient node, however, they have more stream processors overall, so all the saving gets eaten up quickly. For this comparison, we’re looking at the reference SKUs from both competitors.

When idle, the Radeon RX Vega 64 consumes approximately 85 Watts, lower than its predecessor, the R9 Fury X which used to consume approximately 96 Watts under load. Under load using FurMark, we see the RX Vega 64 eat up around 405 Watts which is quite a lot, yet lower than the R9 Fury X. Our FurMark settings are a bit conservative, so we switched to video games for a power test. It was surprising to see the RX Vega 64 consume even more power, going up to 460 Watts at peak load. We also looked at the temperatures while running these tests. Under idle conditions, it would be around 33-35 degrees Celsius while under load it would go to 83-85 degrees Celsius.

The GTX 1080 FE has a lower power draw under all conditions. The 1080 Ti, on the other hand, is quite similar to the Vega 64 with regards to draw. Coming back to the GTX 1080, under idle conditions the GPU would be around 31-33 degrees Celsius while under Furmark, it would rise to 82-84 degrees Celsius. When checking power draw, the 1080 Founders Edition would consume approximately 82 Watts at idle and in Furmark, that would go all the way up to about 300 watts. In our gaming benchmarks, the power draw did increase a little bit to about 315 Watts. Compared to its predecessor, i.e. the GTX 980, the GTX 1080 consumes more power under load and idle conditions.

Here’s the FPS table for some of the games that we benchmarked on the RX Vega 64:

Subsequently, the same on the NVIDIA GTX 1080 Founders Edition.

When we look at frame times of Rise of the Tomb Raider using FRAPs, we see that they are more or less equally matched. We then switched to The Witcher 3 and scaled the resolution to 4K. We did notice a couple of spikes in the frame time charts indicating anomalous frame rates. We then used HITMAN to check for spikes and noticed next to none except a few towards the end of our benchmark runs. The last game we ran was GTA V which had quite a few closely packed spikes towards the latter part of the built-in benchmark run, however, visually, we couldn’t see that big a difference.

We noticed equally anomalous spikes on the GTX 1080 Founders Edition as well, however, they were synchronous with scene changes so these are normal. However, we did notice fewer spikes in the frame times with the GTX 1080. The GTX 1080 Ti worked smoothly with HITMAN as well, at both, FHD and 2K resolutions. In GTA V, the last benchmark that we ran, we noticed a similar set of spikes as we did with the RX Vega 64, however, the amplitude of the spikes were lower than the RX Vega 64. Overall, the two cards were fairly consistent with few spikes to worry about.

AMD has produced quite a great product with the RX Vega 64 for enthusiasts. It does perform better in a few games such as DOOM and Ashes of the Singularity, while the NVIDIA GTX 1080 Founders Edition does better in most other games. Especially, when you scale down on the resolution and the 1080 FE gives comparatively greater FPS numbers. Overall, we’re looking at close gaming performance with the two graphics cards. In power consumption, AMD has done a great job at improving the architecture from its predecessor, however, compared to the competition, the Vega 64 is a power hog. Its temperatures aren’t that better off either. At the end, we’re looking at two similarly-priced graphics cards with very similar performance but vastly different power draws. Extrapolating electricity costs over a longer time, the RX Vega 64 can be more expensive to run which works in favour of the NVIDIA GTX 1080. However, this is the first generation of the Vega architecture and we hope to see better with the second generation. Till then, it’ll have to be the NVIDIA GTX 1080 Founders Edition.

This comparison was first published in the November issue of the Digit magazine. Click here to subscribe