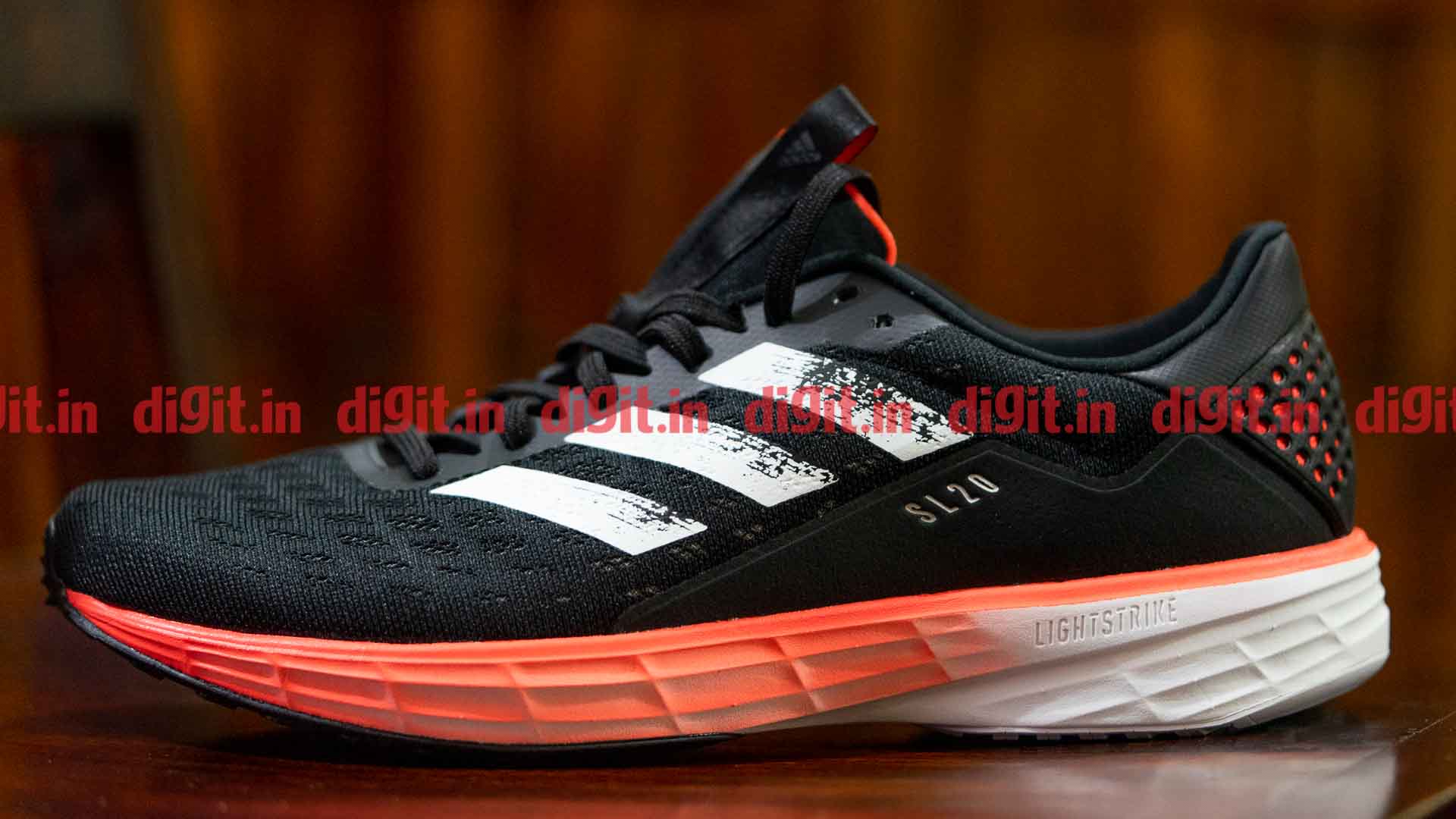 Gone are the days when a running shoe was basically well-fitting footwear with a rubber sole. Running shoes nowadays have as much engineering behind them as, perhaps, a car. The Boost foam on Adidas’s Ultraboost series of shoes saw the shoemaker collaborate with BASF’s chemical engineering team in order to create the material that is now called the Boost foam. Now, Adidas has launched a new running shoe, the SL20 which is designed to offer a feeling of being “faster.” The good people at Adidas shared a pair of shoes with us and here’s what we’ve come to learn of it after putting a little over 50 km on them.

The Adidas SL20 is a follow up to a very popular shoe from the company’s portfolio, the SL72 which was launched in 1972. The shoe was originally designed for use in the German Olympics and was worn on the podium by many an athlete. The SL in the name stands for Super Light, meaning its supposed to be lightweight. The shoe is also designed to feel very light while running and is better for short, fast runs rather than long-distance runs. The SL20 weighs just 238 grams, making it one of the lightest shoes from the German company. The shoe comes with a new Light Strike midsole, a torsion system, a heel counter and rubber provided by Continental for the sole. The entire choice of materials seems to be dictated by the tenet of keeping the weight down, which shows. Our shoe was the Black/White/Signal Coral colourway, which is Adidas’s fancy way of saying black-white-orange. 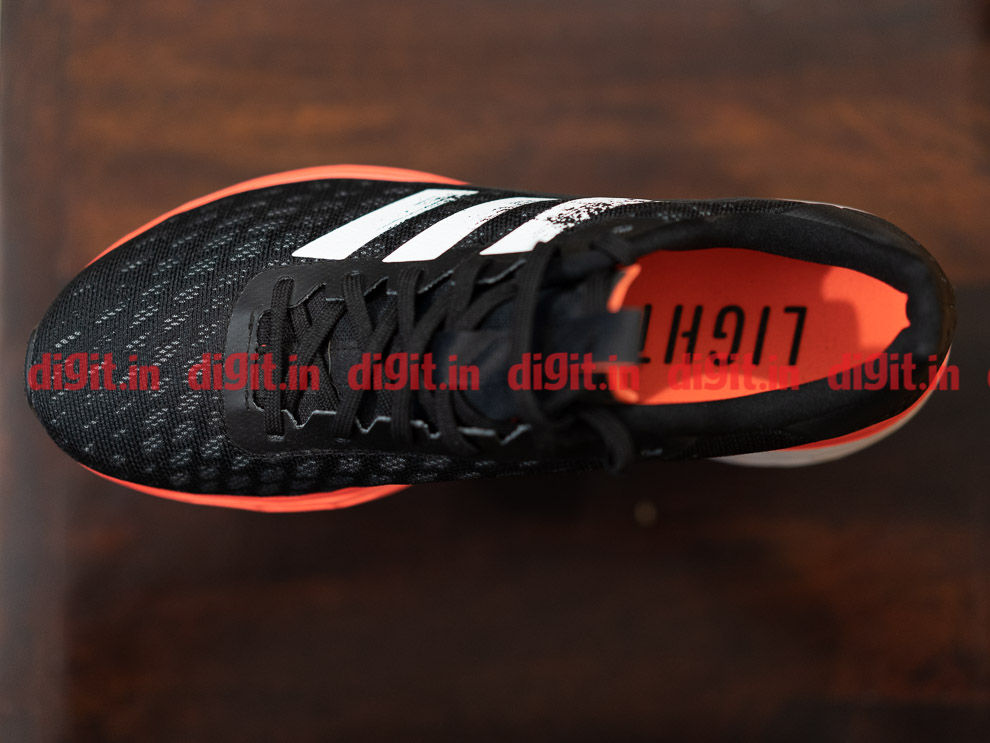 How We Reviewed the Adidas SL20

Running was involved in testing the Adidas SL20.

The upper of the Adidas SL20 is made of an engineered mesh which feels extremely thin and lends to the light-weight nature of the shoe. The tongue of the SL20 is also a just a thin nylon-like fabric, with no padding. Lacing the shoe will wrap it around your foot snug. Since the SL20’s engineered mesh is super thin, its advisable to wear thicker socks for your runs. While the shoes run true to size, the toe box on the SL20 isn’t designed to accommodate wide feet. Unlike the Ultraboost shoe, which uses a stretchable fabric for its upper, the engineered mesh is fixed in its shape and does not stretch to accommodate varied shapes. If you require a shoe with a “wide” designation in its size, then you’re better off skipping the SL20 for its relatively narrow and rigid toe-box. 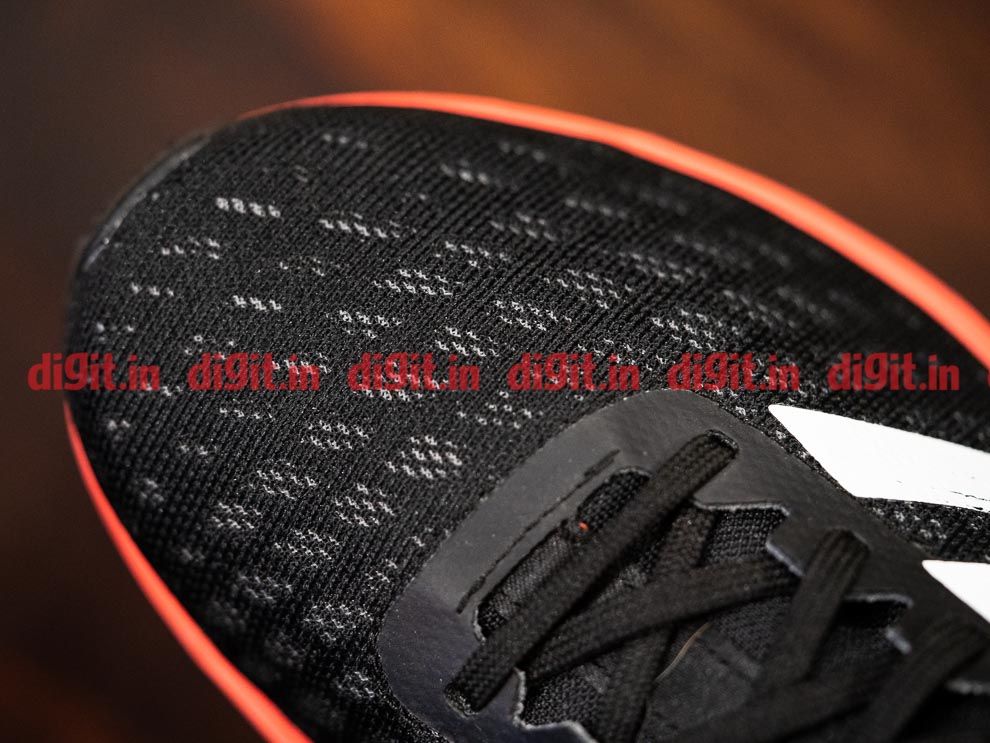 The engineered mesh upper allows the shoe to remain lightweight

Additionally, the Adidas SL20 features an integrated heel counter. What this means is that unlike on the Ultraboost where the counter is on the outside, beautifully visible, the one on the SL20 is on the inside. Adidas has used an incredibly hard material here, which not only locks the heel square in its place but also makes the shoe really easy to slip into. 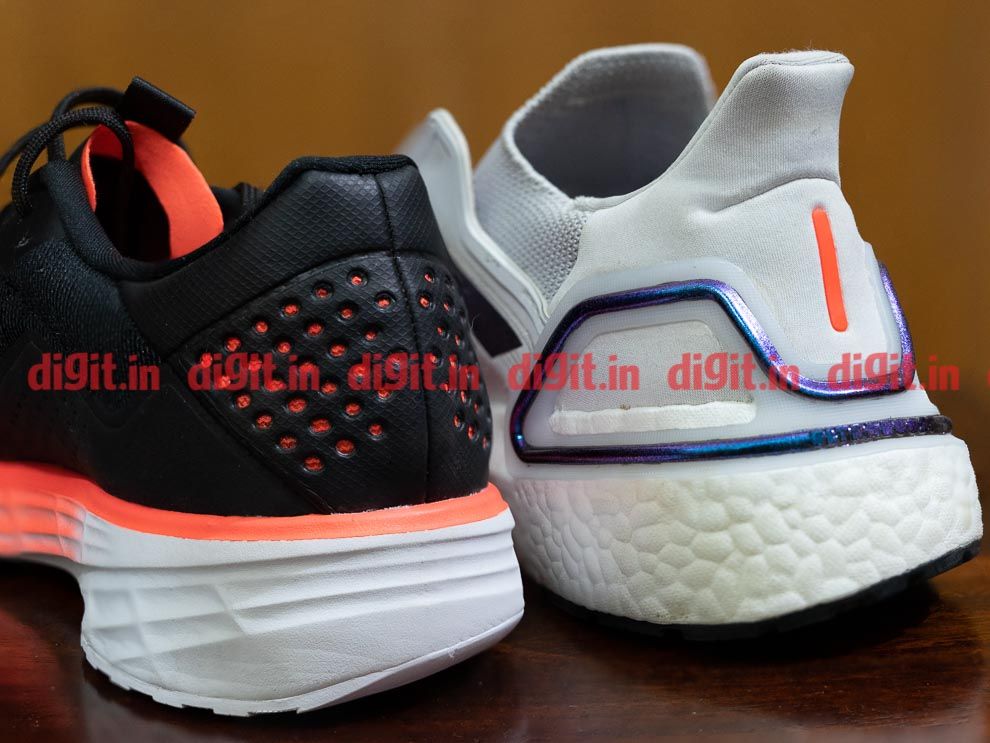 The heel counter on the SL20 is embedded inside the shoe, unlike that on the Ultraboost

Running with the Adidas SL20

The Adidas SL20 feels incredibly light, right from the moment it's worn, to when you start running. The engineered mesh almost feels like nothing, and the new Lightstrike foam offers high energy return. Putting things in context with the Ultraboost series, the upper of the Boost is rather thick, and sock like, adding heft to the shoe, whereas the engineered mesh on the SL20 has an “almost not even there” kind of property. The only time you feel like you’re wearing anything is when your foot strikes the ground, which is where the new foam comes into play. Lightstrike foam was originally developed by Adidas for use in Basketball shoes, with the aim that the midsole foam should provide adequate cushioning, be responsive (especially for lateral movement) and do all this while still being very light. Since its introduction in 2018, the Lightstrike foam moved from basketball shoes over to the AdiZero series, Adidas’s flagship running lineup. In that spirit, Lightstrike is a slightly harder foam than Boost, sacrificing some comfort for energy return. This, combined with the extremely light build materials makes you want to go fast. 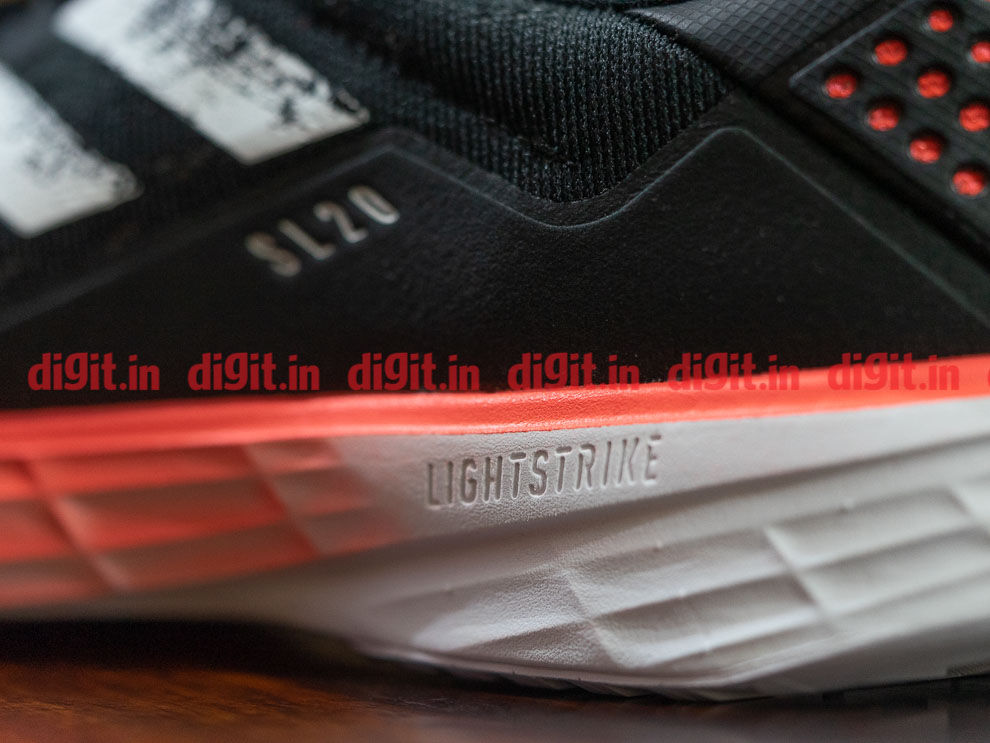 I found myself running at a slightly faster pace (faster than usual, my asthma permitting) and it was mostly due to the fact that the SL20 feel like next to nothing. With no heavy shoes to pull your foot down, its not as much about the foot strike as it is about the overall cadence. This is why I say that the shoe is better suited for short, fast runs rather than long marathons. What does qualify the shoe for long-distance runs (if you’re okay with the hard sole) is the new Torsion system and the heel counter. The heel counter keeps your foot firmly planted and the torsion allows for a “springy” toe-off. The torsion system also helps the energy transition from the heel to the toes effectively, bringing the foot back into its normal state during each strike. For runs that were under 2K, the shoes felt comfortable enough, but for me personally, anything longer (like a 5K) was a little difficult to execute. This is because the Lightstrike foam midsole is not as spongy as you would want it to be for a long-distance shoe. If you're on the heavier side like I am, then the cushioning will only take you so far, and for me, that distance was roughly in the 2-3 kilometre range. But it has to be said, sprints in these shoes really are a lot of fun because the shoes are light and the energy return is incredible.

The outsole on the SL20 uses rubber provided by Continental, a huge upgrade over the original SL72. The original SL72 has a rubber outsole, but at the time, the shoe was designed to replace spikes for Olympic runners. Hence, it utilised a wedge design that added to grip while on the track. Now, the SL20 foregoes that outsole in favour of a flat but grooved outsole, made with some of the grippiest rubber your feet will ever grace. This is the same outsole that you'll find on the twice-as-expensive Ultraboost. The Continental rubber extends serious grip to the shoes, making running even on wet surfaces a breeze. Now I wouldn’t recommend running on wet marble, but if you were running on wet roads or even a wet track made of concrete, you wouldn’t find yourself having to worry about slipping. 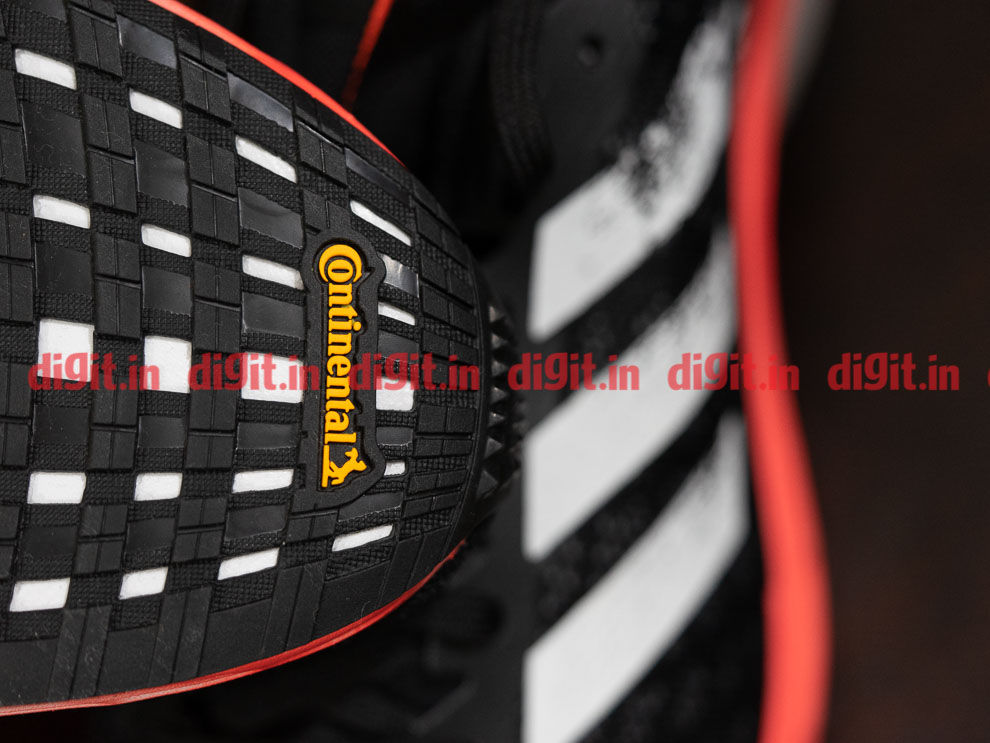 The Continental rubber outsole provides a very good grip, even on wet surfaces

The Adidas SL20 is a running shoe designed for fast runners. The shoe is ideal for short and fast runs instead of long marathons. This is because the Lightstrike foam is firmer than the Boost foam, which allows it to transfer more energy through each strike than the Boost counterpart. The mesh construction of the upper lends to the near-weightless feeling of the shoe and as such, would make a great shoe for those who are looking for a nice pair of trainers. The fact that they cost half as much as a pair of Ultraboost works heavily in the favour of the SL20.

Truecaller launches COVID-19 Hospital directory for Android users in India
Amazon Prime Day Sale 2021: 5 easy tips on how to get the best deals and discounts
Join Digit for a live smartphone AMA session on Amazon India and stand a chance to win an iPhone 11
Amazon Prime Day Sale 2021: Here’s what you can expect
Google Meet ends free trial, will now be limited to a 60-minute time limit for group calls
Advertisements