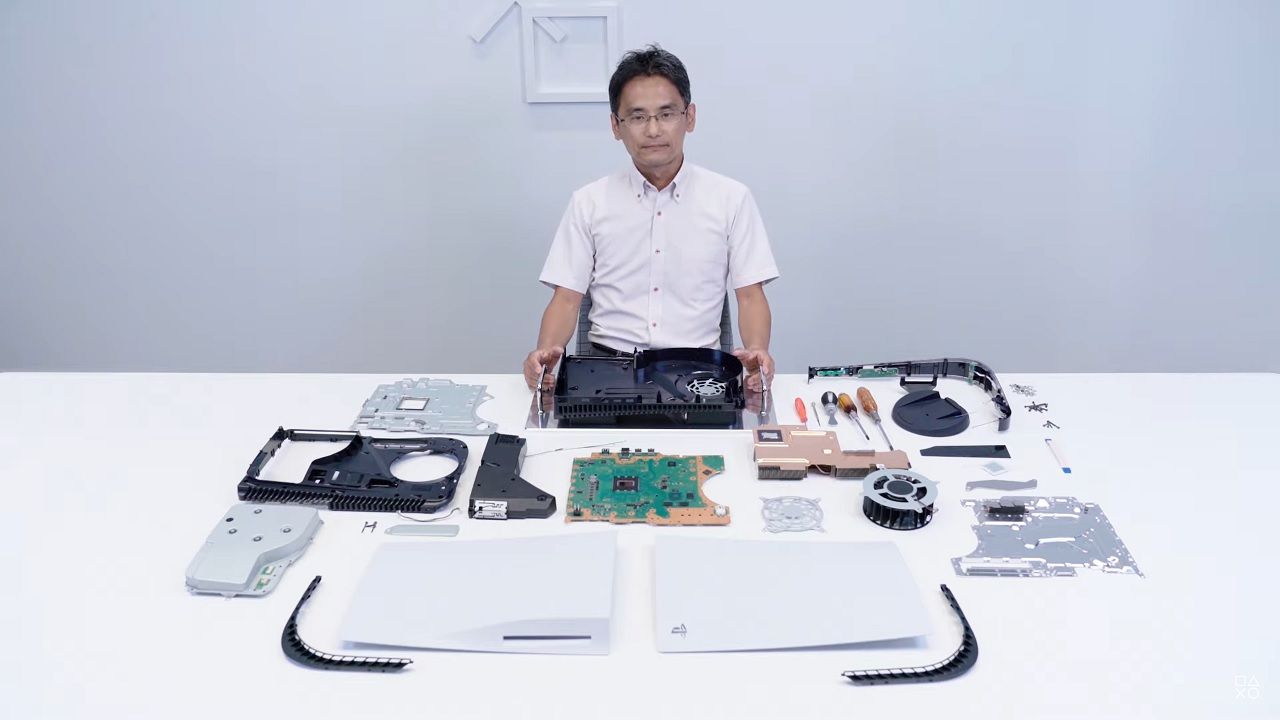 PS5 Teardown: A look at what makes the next-gen console tick

Sony has just posted a full teardown video of the PS5. The video shows off the internal components of the PS5 including the GPU, CPU and more. The PS5 is set to launch on November 12

We’re just a little over a month away from the launch of the PS5 and the hype has just gotten bigger as the days roll by. Not content with giving us a good look at the PS5 earlier this week, Sony has gone ahead and posted a teardown of the PlayStation 5 console. To say that this is big deal is an understatement. We finally get to see exactly how big the console looks and even how it’s built and what are the various components that go into the next-gen console from Sony. The video opens with VP of Mechanical Design, Hardware Design Division, Yasuhiro Ootori presenting the behemoth that is the PS5. At first glance, it does look rather massive. It stands at 104mm wide, 390mm high and 260mm deep. Mr Ootori even acknowledges that it is bigger than the OG PlayStation 4. He also mentions the fact that the size of the console helps in improving processing power and even helps keep the console quiet. So maybe that size does have an actual role to play, after all.

The PlayStation 5 comes with a USB Type-A (high-speed USB) and a Type-C port in the front and two high-speed Type-A ports, a LAN port, an HDMI port and a power port. The PlayStation 5 also come with two air vents in the front and custom skin lovers are in for a treat as the two white panels can be removed and assume customised to your personal liking. The back of the console is essentially one big exhaust port for better air-flow and cooling. The PlayStation 5 also looks to come with a removable base that is rather nifty as it comes with its own screw storage unit. The PlayStation 5 also comes with a fan that is able to draw in air from both sides, helping keep the console cool. Another really sweet feature are two dust catchers that will make it much easier when it comes to cleaning the console. The dust is essentially collected in the dust catchers. The teardown video also reveals the M.2 with PCIe 4.0 support storage expansion slot. 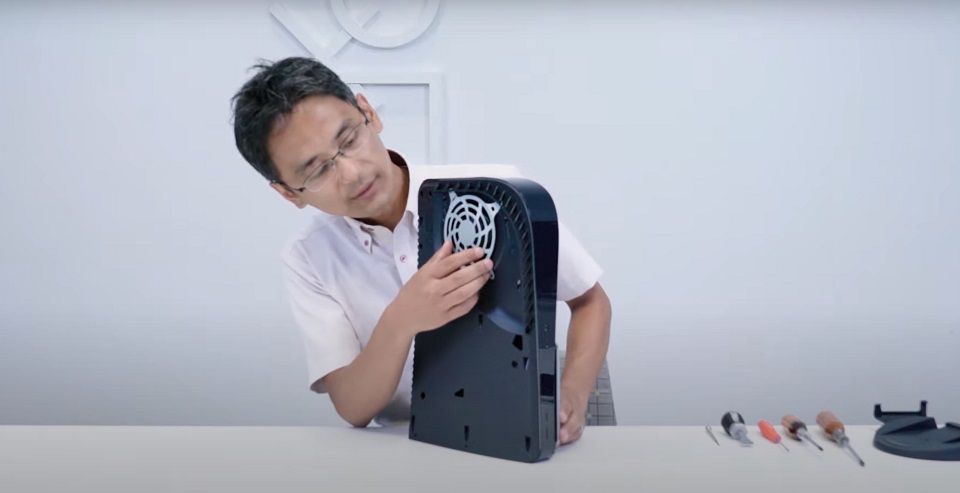 The teardown shows off what we’ve all been waiting for. The first thing to come off the console is the fan. It is 120mm in diameter, 45mm thick and is a double-sided intake fan. We also get a good look at the Ultra HD Blu-Ray drive on the PS5. The drive comes in a sheet metal case and is mounted with two layers of insulation to reduce noise. We then get our first good look at what really powers the console in the motherboard of the PS5. The console is powered by an AMD Ryzen CPU based on the Zen 2 architecture. It has 8 core and 16 threads and runs upto 3.5 GHz.  We also get a good look at the GPU of the PS5. It’s an AMD Radeon GPU and runs on an rDNA 2-based graphic engine at 2.23 GHz and delivers 10.3 Teraflops. 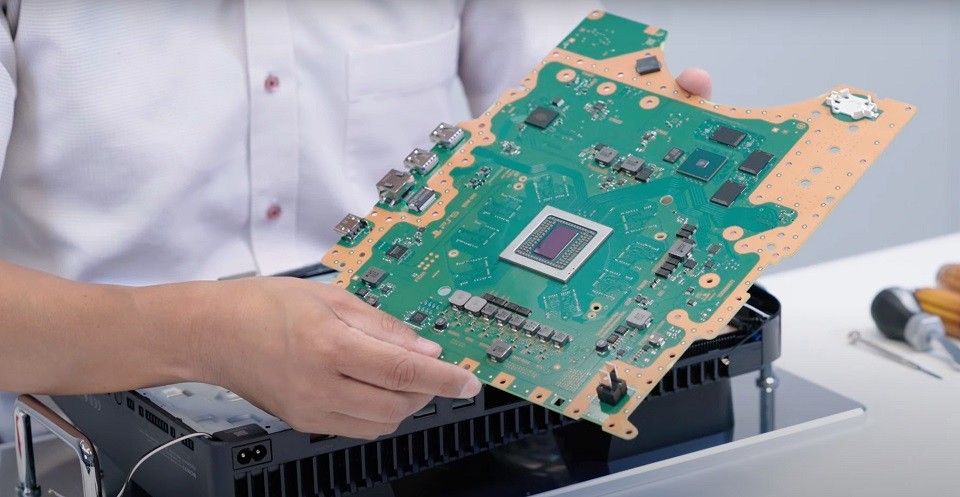 The motherboard also contains 16 GDDR6 RAM that runs at 448GB per second. We also see the 825GB SSD on the PS5. The PS5 also comes with a Custom SSD Controller that allows for read speeds of 5.5GB per second at raw data transfer rates! So say goodbye to all those loading screens. Another cool feature of the PS5, as shows in the video is it’s SoC cooling solution. Since the SoC is a small die running at a very high clock rate, it leads to a high thermal density in the silicon die. This led the engineers at Sony to use ‘liquid metal’ as a thermal conductor. It essentially sits between the SoC and the heat sink. And finally, we see the giant heatsink of the PS5 and the 350W power unit as the final pieces of the PS5 puzzle. 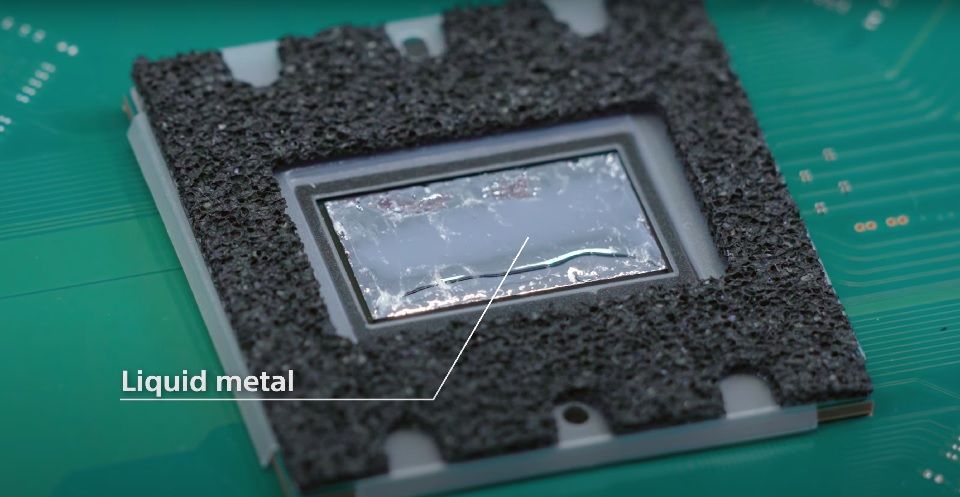 So, there you have it folks! The full teardown of the much-hyped PS5. We now have a fair idea what the console looks like in terms of its size and why it is as big as it is. If you guys are interested, we also have a retrospective on the journey of the PlayStation 4 in India, right here.