Xiaomi has launched the Mi Box 4K in India. The device is priced at Rs 3,499 and will be available starting 12 noon on May 10th, on Flipkart, Mi.com, Mi Home, and Mi Studios. You may think that Xiaomi is late to the party as we have devices like the Chromecast, Fire TV Stick, Android boxes from DTH providers, Apple TV 4K, and any other streaming box you can think of to sit under your TV. But there is a market for those looking to “upgrade” their smart TV experience without investing in a new TV. Some old Smart TVs have stopped receiving updates and hence no longer support popular streaming services. Others run on AOSP and give users a lacklustre experience and these consumers may want a smart TV experience without actually upgrading their TV. Thankfully, apart from the Chromecast and Fire TV Stick they now have the Mi Box 4K as an option. So let's break down everything you need to know about the Mi Box 4K.

As the name suggests, the Mi Box 4K has the ability to stream in 4K. It supports HDR 10 but does not support Dolby Vision. It supports Dolby Audio and DTS but not Dolby Atmos. It has a 64-bit 2.0Ghz CPU, Mali 450 GPU at 750MHz, 2GB DDR 3 RAM, and 8GB eMMC storage. It has a compact form factor and all the connectivity options are at the back. You have an HDMI 2.0b port to connect to your TV, a USB 2.0 port, and a 3.5mm audio port. The device also comes with a remote control which is a lot like the MI TV remote control. It has a power button, a dedicated button to bring up the Google Assistant, navigation, and hotkeys for Netflix and Prime Videos and also volume controls. The device runs on the Android TV platform. It also has access to the Google Play Store. 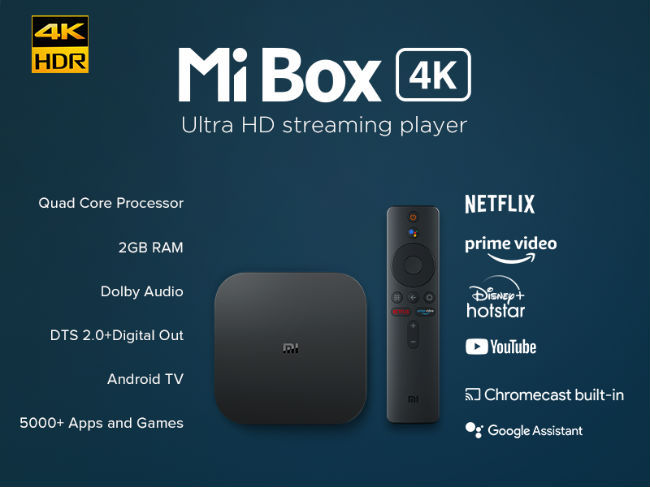 If the Mi Box 4K runs on Android, does it also have PatchWall?

No, the Mi Box 4K has HDMI 2.0b. With this, you can expect to get a 4K HDR output from the system. You will not get eARC as that is an HDMI 2.1 standard. You get Dolby Audio and DTS support from the box.

Yes. The Mi Box 4K supports HDR 10. It does not support Dolby Vision.

No. It supports Dolby Audio and DTS but not Dolby Atmos.

Does the Mi Box 4K support all streaming services?

Yes, it supports all the streaming services that work with Android TV. It has all the popular services including Netflix, Prime Videos, Disney+ Hotstar, Zee5, Voot, and many many more available on the Play Store.

Will the Mi Box 4K get future Android TV updates?

There is no defined update cycle like it is for Android smartphones, however, Xiaomi says that users can expect 2 OS updates on the box, which means it will be relevant for a long time.

Does it have the Google Assistant?

Yes, it supports the Google Assistant. Users can use the dedicated Assistant button on the remote control to bring it up. If you have Google Assistant-enabled smart appliances at home, then you can control them from the comfort of the Mi Box as well.

What is Data Saver and how does it work on the Mi Box 4K?

Data Saver is the same as we have seen on the Mi TVs from Xiaomi. Data Saver will come to the Mi Box 4K as an update. The update will be available when the box goes on sale. Put simply, as the name suggests, Data Saver helps you consume less data. When you connect your Mi Box 4K to the internet via your smartphone (hotspot), the data saver will kick in automatically. So if you have a limit of 1 or 2GB on your mobile data, the data saver feature will ensure less data is consumed so you can watch for longer. How well this works is something we will tell you when we get the box in for review. There is also a data counter which will give you a reminder after a certain amount of data is used.

If I only use a hotspot, can I still cast content from my phone to the Mi Box 4K?

Yes. The Mi Box 4K will let you cast content from your smartphone to the box without the need for Wi-Fi connectivity. To cast on a Chromecast device, for example, a router is a must. In this case, you don't need one.

What Codec does it support?

What about the remote control?

The remote control that comes with the Mi Box 4K is similar to the one we see with the Mi TV. It has a power button, a dedicated Google Assistant button, dedicated buttons for Netflix and Prime Video, and also navigation buttons and volume controls.

Can I connect wireless headphones to the Mi Box 4K?

Yes, you can connect a pair of Bluetooth headphones for a personal listening experience ensuring the others in the house don't get disturbed during those all-night binge-watching sessions. It supports Bluetooth 4.2.

Does it come with an HDMI cable in the box?

Yes, it comes with an HDMI cable in the box.