Chromecast 3 review: Not a worthy upgrade If you are looking to buy a TV today, chances are you are looking at a smart TV. If, however, you are on a budget, then the “Smart” experience on budget smart TVs is very underwhelming. To counter this, you will need to invest in a streaming device. The two dominating options in India are Google’s Chromecast and the Amazon Fire TV stick. Amazon is launching a 4K Fire TV stick in the coming days whereas the new third generation Chromecast can only do 1080p at 60FPS. Is it one to consider?

The third generation Chromecast retains the design of its predecessor. It has a circular design with the HDMI end sticking out. It is convenient enough to connect without hampering other devices you may have connected to the back of your TV or entertainment centre. It also has a microUSB port for power and one button that can be used to reset the Chromecast. The device comes with a plug to supply power to the Chromecast in the box, but if your TV has a USB port, you can power the Chromecast using that. The Chromecast was launched in two colours internationally, but it looks like only the black colour is available in India. 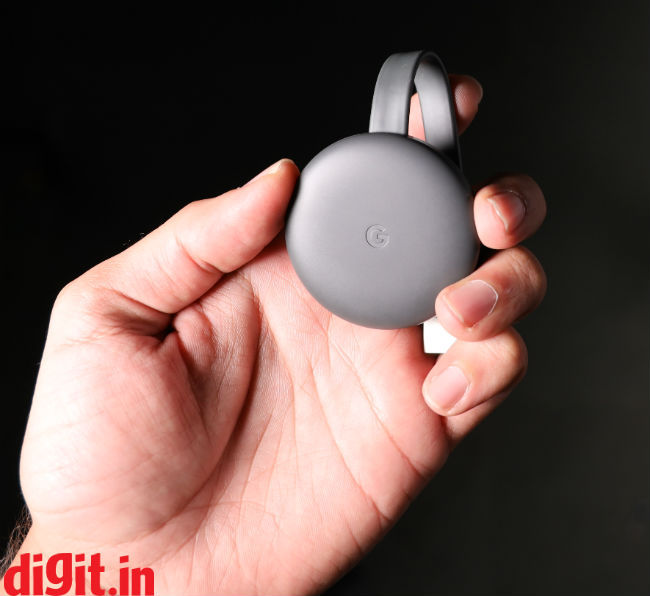 All-in-all, Google has retained the good build and design of the Chromecast 2 and changed the finish which is nice. One thing, and this is probably me nit-picking, is that the back of the Chromecast 2 held the HDMI end magnetically, a feature that is absent from the third gen device. 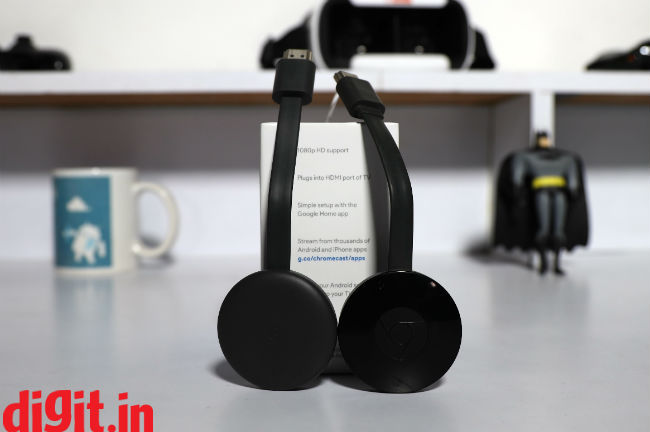 Setting up the Chromecast is as simple as connecting the device to your TV, downloading the Google Home app on your smartphone and following the onscreen instructions. If you have been a Chromecast user since its inception, you would have seen how the streaming dongle has evolved. The app now shows your other compatible smart appliances that can be controlled via the Google Assistant as a part of the Google Home ecosystem. If you have multiple Chromecast dongles, smart lights, Google Home speakers, an Android TV and more, you can control it all from the comfort of the app and even your voice. 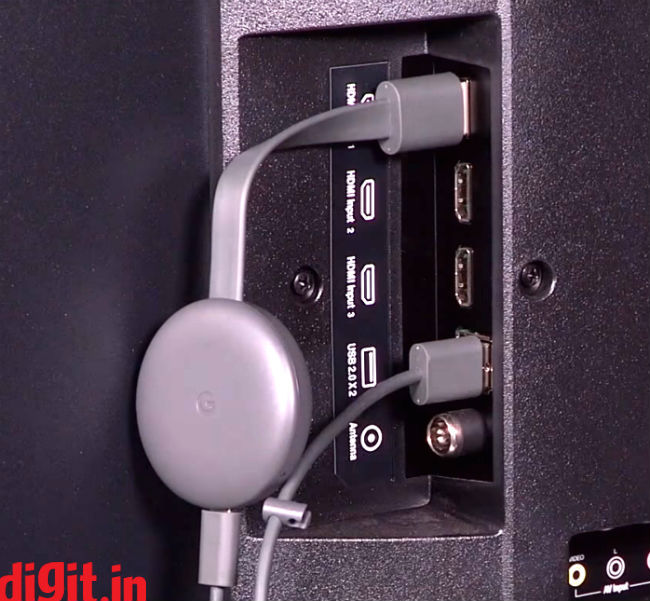 The Google Home App will also help you discover apps that have casting capabilities. You have the standard set of apps like Netflix, Hotstar, Facebook, Spuul, Eros Now, Hooq, Plex and many many more. The library of apps that support Chromecast has grown considerably. Sadly, there is no support for Amazon Prime Videos.

You can also control the device using your voice if you have the Google Home Speaker set up. You can say things like “OK Google, Play Stranger things on Netflix on the Living Room Chromecast” and it will do that.

Google Claims that the Chromecast 3 is 15 percent faster than its predecessor and honestly, unless you have a keen eye you won’t notice this upgrade. In the time that I spent with it, the Chromecast 3 worked swiftly and fluidly, loading up and playing every piece of content I threw at it, be it a YouTube video, an episode of Modern Family on Hotstar or Castlevania Season 2 on Netflix. The Chromecast 3 supports 5GHz Wi-Fi enabling faster and smoother streaming.

There is only one problem I encountered. After prolonged use, sometimes my smartphone disconnected from the device requiring me to go back to the Home app and reconnect. This can be a problem if you are one that needs to take a phone call and want to pause what you are watching.

If you are looking to game on your TV with the Chromecast, I would say don’t. there is a noticeable lag when mirroring your smartphone to the TV and the device won’t work as a controller for big screen gaming. We mostly tried Asphalt 9 but struggled with latency and lag.

You can also mirror your smartphone on the TV and this experience works surprisingly well. I shared my family photos, videos on WhatsApp, showed some simple settings navigations on the TV and it all worked well. If you need to show people things on your phone, the mirroring works quite well.

When you are casting via the compatible app (not mirroring), your smartphone becomes the remote for the app, and the Chromecast works as a proxy device. It starts streaming from the Internet, leaving your phone free for calls, or even other things you may want to watch on it. For example, if you're casting a movie on Netflix, you can use the phone to control volume and playback, but don't need to keep the Netflix app open. You can use your phone to make calls, play games, watch YouTube; essentially use it like a normal phone, which is where casting beats mirroring. As long as your phone and Chromecast are on the same WiFi network, casting shall continue.

Another thing to consider, is that the Fire TV stick comes with a remote control eliminating the hassle of using your phone as a remote control. As minimalistic as the Chromecast is, it needs to evolve to keep up with the Fire TV. If you want, you can check out our in-depth comparison between the 2 here. Put simply, the Fire TV has an easier to use UI and the remote control makes the whole setup easy to use.

If you are not happy with the “smart” capabilities of your Smart TV or are looking to make your old TV a smart one, then yes you can consider the Chromecast. It works well for what it can do. However, this isn’t the only device available in the market. The Fire TV brings with it a simple UI along with a voice enabled remote control, support for all the apps you have on the Chromecast along with Prime Videos and overall works a lot better as a set top box replacement if you have a good internet connection. The lack of a dedicated remote means you will always rely on a smartphone to use the Chromecast. Devices like the Fire TV offers a physical remote control and onscreen displays, which is overall easier to use. If you have a Chromecast 2 then you don’t need to upgrade to this. In fact, with the function to value proposition, the Fire TV makes more sense to purchase. As our comparison will tell you, the Fire TV is overall a more value for money proposition.