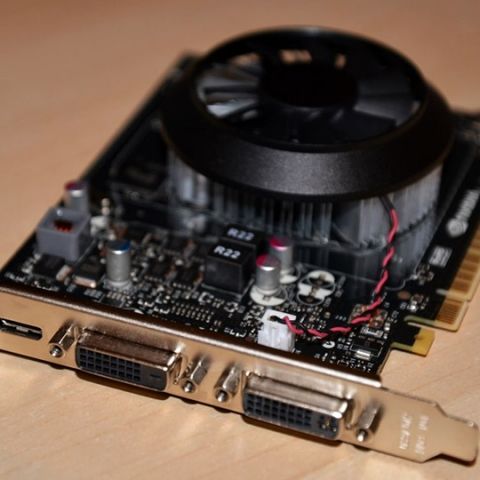 This card performs well for a card that comes with no power connectors. While AAA games won't play at maximum configuration, a small sacrifice on the configuration can help with that. The cards are priced Rs.9900 for the GTX 750 and Rs.11,990 for the GTX 750 Ti. We see that this card could end up being popular in the Indian market owing to the performance that it delivers at this price point.

The latest GPU architecture from NVIDIA came out today and they are calling it Maxwell. This doesn’t mean that they are going to launch the 800 series immediately. We are yet to see the GTX 790 and what we hear could be an improvement over the GTX TITAN. You can read more about it here. So Maxwell is coming into the picture with the launch of the GTX 750 and the GTX 750 Ti. The details of these two cards are mentioned below. 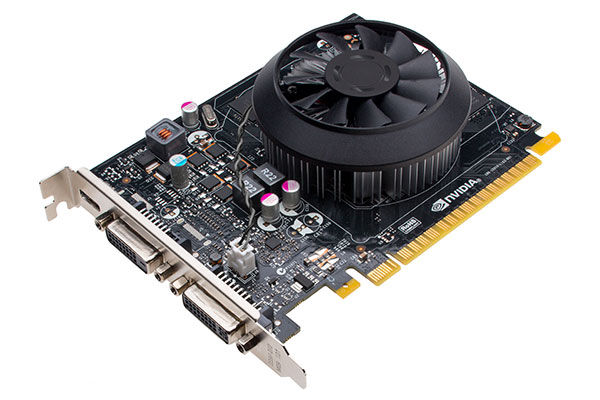 So the new card is and entry level GPU meant to replace the GTX 650 Ti but with a little difference that seems to be highlighted everywhere in the press release that NVIDIA came out with – that the performance/watt has gone up to a much higher level. For the previous generation most manufacturers only had the GTX 640 which could run off the motherboard’s power-supply. Anything greater would require a 6-pin PCIE power connector. There do exist GTX 650 SKUs by board partners that don’t require a power connector but the clock speed on those units have been scaled down to make do with the reduced power input.

The GTX 750 and the GTX 750 Ti are supposed to replace the GTX 650 Ti which occupied the mid-segment in the current line up till today. 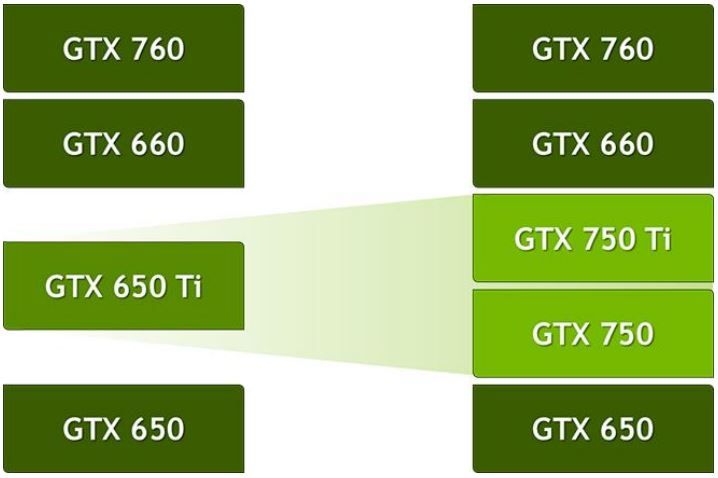 Maxwell architecture
The Maxwell architecture still makes use of the same API functionality that Kepler GPUs do. It’s just that the way things go about in the GPC (Graphics Processing Cluster) has been improved.  However, there has been a performance drop per SM (Streaming Multiprocessor). With the improvement in design there arose the ability to squeeze more SM (5 instead of 2 in the Kepler) in roughly 25% more die surface area. Therefore, the cumulative performance increase at the end of the pipeline has increased.

Then we have an increased L2 cache size of 2MB while the Kepler GK107 had 256KB, the L2 cache is where data spends a lot less time but is one of the most accessed memory regions of the whole architecture. Now with more L2 cache you get the ability to keep data closer to the processing unit and time is saved since less communication needs to occur between the L2 cache and the GDDR5 memory.

We have the GM107 chip on the left and the GK107 on the right and straight away we can see that the GPC has more SM under the Raster Engine, there are two in the Kepler architecture but five in the Maxwell architecture. Each SM still has one Polymorph Engine and a unified L2 cache connected via two memory controllers. Let’s look at the specifications of the GK107 and the GM107 chips. 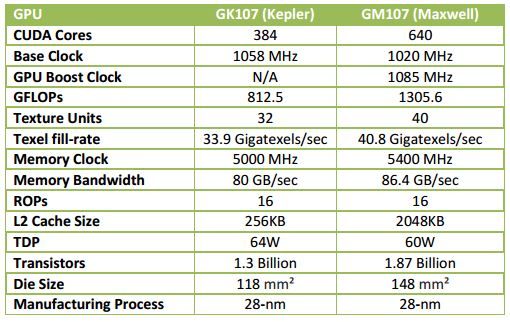 Due to the fact that there are more SM in each GPC we had 192 CUDA cores per SM and all 192 cores were handled by the same control logic but now that has been broken down and each SM has 4 blocks with a control logic for each block. This makes each control logic in charge of 32 CUDA cores compared to 192 in the Kepler architecture. Subsequently, it's easier to manage resources but intercommunication between components has increased. This could be the reason for the 10% drop in performance per SM that we talked about earlier.

With the die size increasing from 118mm2 to 148mm2 we now have 640 CUDA cores instead of 384 on the GK107 which is a 25.4% increment in die size but with a 66.67% increment in the number of CUDA cores. The manufacturing process is the same 28nm process that the Kepler architecture had.

The GTX 650 Ti which this card replaces makes use of an external 6-pin power supply but with the GTX 750 Ti there is no requirement for a power connector. A PCIE 2.0 slot can provide a maximum of 75 Watts before you end up burning the copper traces or blowing up a fuse, so all cards that come without a power connector make use of less than 75W. However, the performance also scales accordingly. A GTX 640 is by no means a gaming card, it’s something that you’d make use of just to get by. With the GTX 750 Ti you do get an improvement over the older generation of graphics cards but not by a wide margin and thus brings into question how much you might have to spend over a course of time. The R9 270 and the R9 270X from AMD seem to be the closest to this card in the current generation and you can check out the benchmarks in one of the following sections.

Build quality
The reference board that we received has 4 memory chips on the front but they are not covered by the heatsink so pushing the memory clock on the reference card is a risky business. The VRM circuitry seems to a 2 1 phase configuration with 2 phases catering the GPU and 1 phase for the memory. Which means maintaining a stable overclock is going to be difficult on a card based on the reference model whereas SKUs brought out by various board partners might have an improved power phase design to remedy the situation. Even the chokes which are part of the VRM circuitry are different for each phase. The GPU obviously seems to have gotten better chokes with a closed top while the phase for the memory is an open top choke which tends to get heated much faster.

At the top right of the PCB we can see that there is a provision for attaching power connectors. Which means we may see SKUs by board partners that offer a high factory overclock and make use of the power connector. We should be getting GPUs from all manufacturers soon and we’ll revisit this topic later. 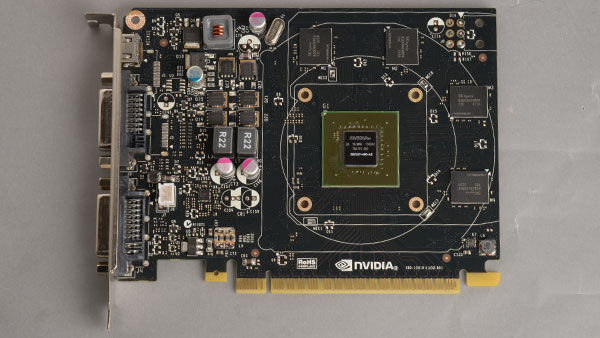 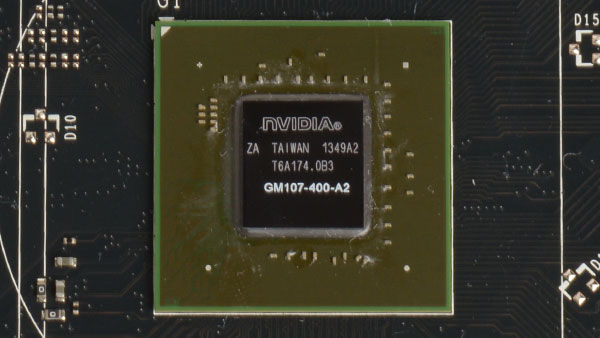 Partner boards
We have a few partner board images to share today and all of them have a dual slot design. We did spot a few single slot cards but the cooler will use up an extra slot. At the press conference we were told of low profile cards that are in the making but they weren’t put up for demonstration. 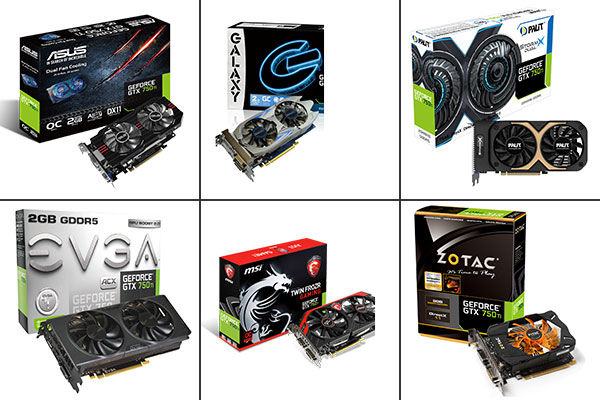 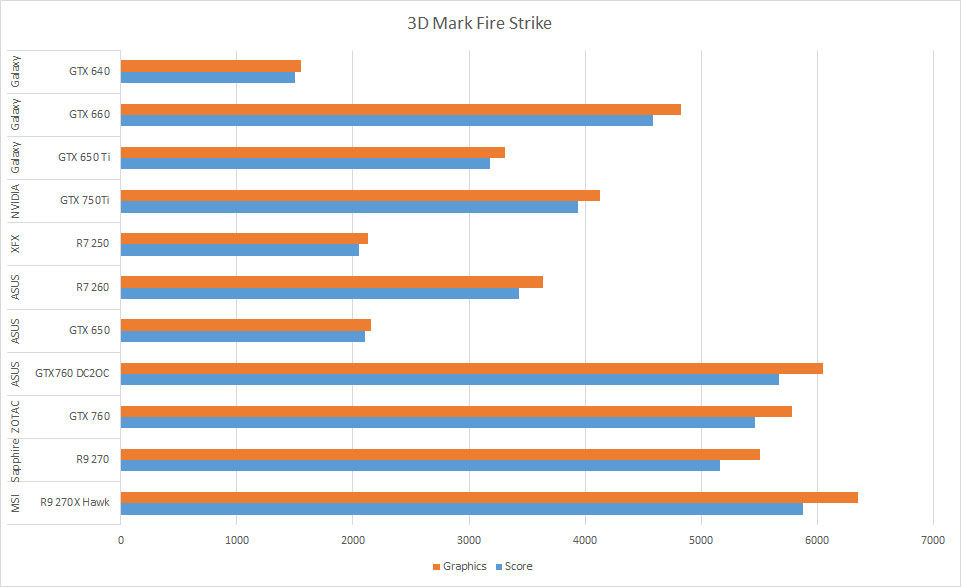 Gaming
Even in the gaming benchmarks the results are similar with the GTX 750 Ti pulling ahead of the competition as well and improving over the previous generation. The FPS scores indicate that the card is capable of running most current AAA games at medium configuration on a 1920x1080 resolution with ease. The ultra settings did manage to bring the card down to a crawl but then again, this card wasn’t meant to be a high-end card. The actual FPS scores on ultra configuration are as follows.

So you can discern that the scores aren’t that bad and you should be able to get above 30 FPS in all games by sacrificing anti-aliasing altogether or by reducing it by one or two steps. The remaining benchmark graphs have been given below. (Click to expand) 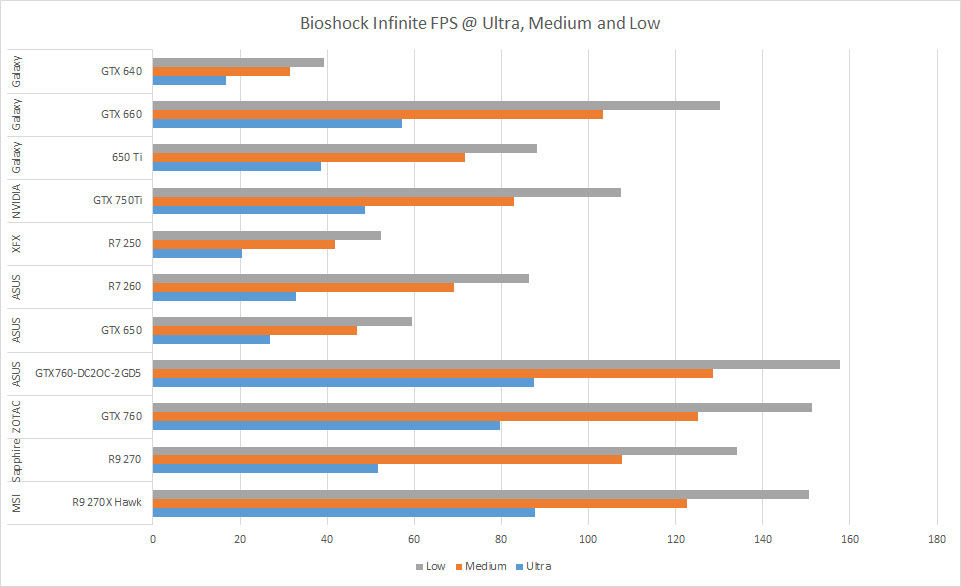 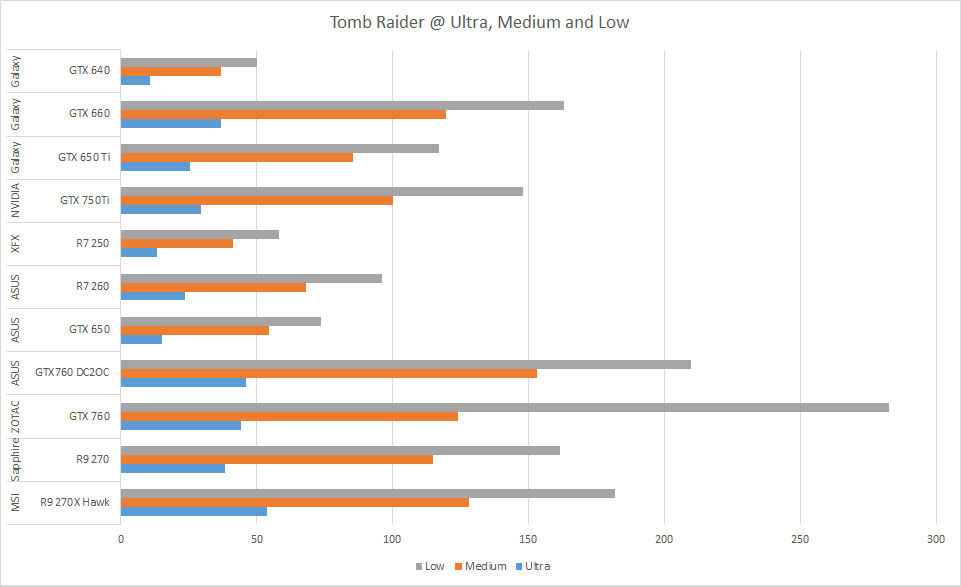 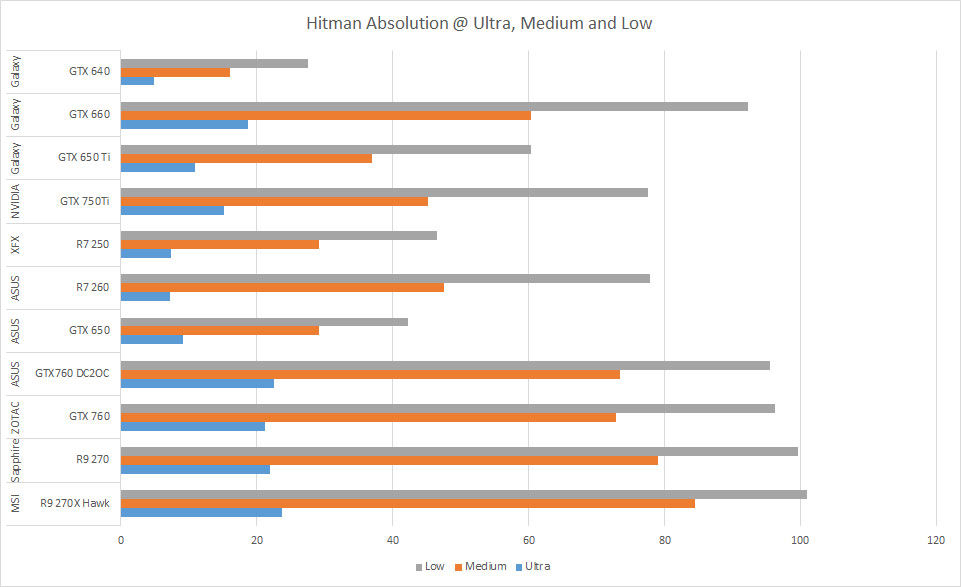 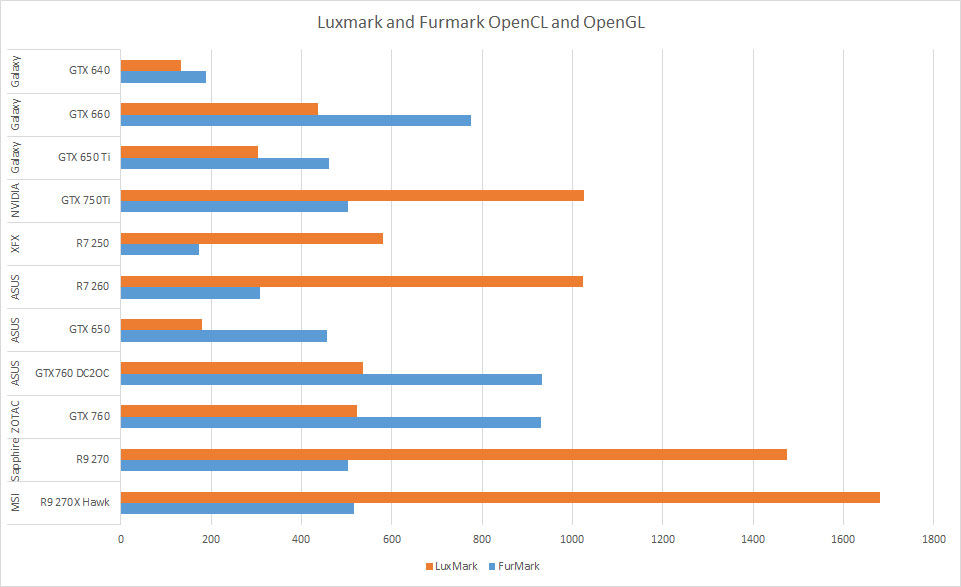 In our OpenCL benchmark we've noticed a massive increment in performance while the OpenGL performance has registered a moderate increment. This increment has made the card way attractive to a minority segment of customers who like to get programming and well as gaming done. While NVIDIA does come out with Tesla cards which are completely engineered for the former, the cost of a Tesla card has been the primary discouraging factor. With this card you now have enough resources to get a decent improvement in your compilation time. 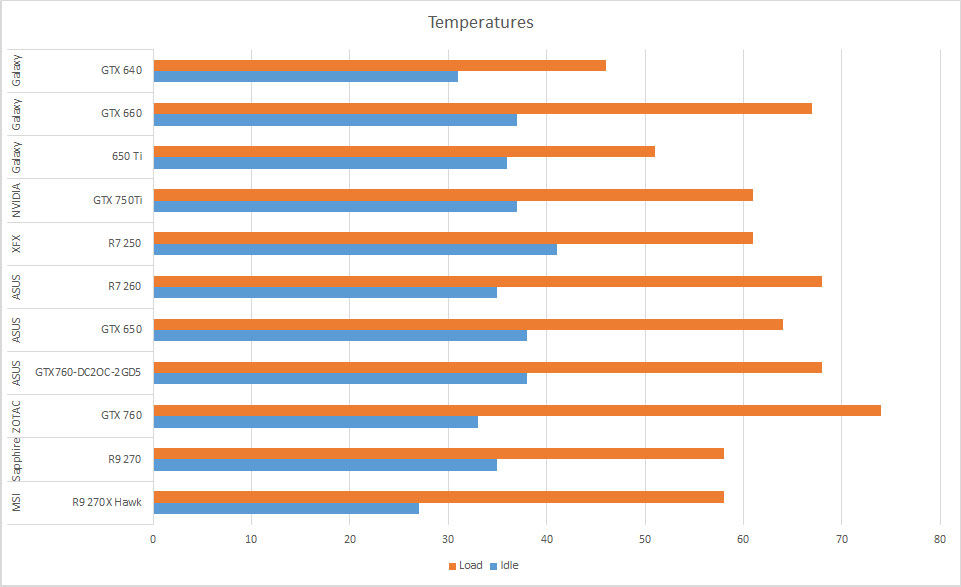 The idle temperatures don't show any remarkable improvement over all the cards that we've compared it against. Load temperatures also aren't that good of a benchmark since this is a reference card with a rather mediocre cooler while most of the other cards are aftermarket SKUs with custom coolers.

What makes this card attractive
There are a few factors that come into play here. Firstly, the card does not require an external power supply making it lucrative for users who wish to get an upgrade done in the least possible investment. Only the graphics card needs to be purchased, no extra components need be purchased to enable the use of this card.

Secondly, GameWorks is supported on this card. GameWorks includes a bunch of technologies by NVIDIA like GeForce Experience, ShadowPlay and G-Sync. ShadowPlay required that you'd need a GTX 650 or higher card but that card wouldn't allow you to get great visuals in your videos while this card does allow for the same due to the increased performance.

And finally, the card costs Rs.11,990 which is higher than what the GTX 650 Ti launched for (Rs.9,399). However, the 650 Ti SKUs required external power supply which this doesn't. These three factors have primarily contributed towards projecting this card as the ideal solution for majority of the populace.

Verdict
This card performs well for a card that comes with no power connectors. While AAA games won't play at maximum configuration, a small sacrifice on the configuration can help with that. The cards are priced Rs.9900 for the GTX 750 and Rs.11,990 for the GTX 750 Ti. We see that this card could end up being popular in the Indian market owing to the performance that it delivers at this price point.