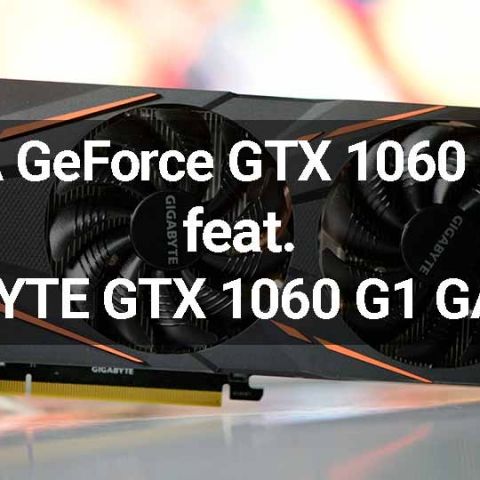 The GIGABYTE GTX 1060 G1 GAMING is a pretty feature packed graphics card with a slightly higher price of Rs.25,499. 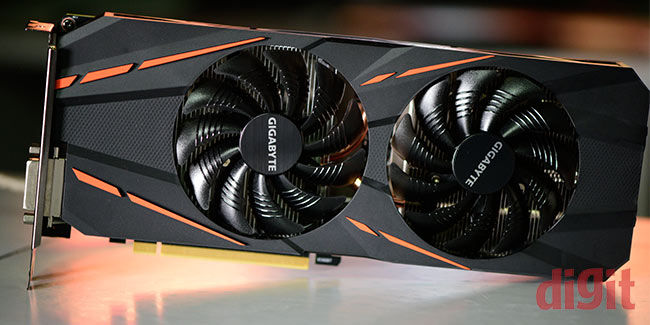 Pascal brought a great deal of performance increment to the NVIDIA line-up. The GTX 1080 and GTX 1070 have both turned out to be powerful beasts with the GTX 1070 being the clear winner when it comes to price/performance in the flagship segment. And the GP106 based GTX 1060 aims to eat into the GTX 1070’s market share. NVIDIA claims that the GTX 1060 provides the same performance as that of a GTX 980 for a lot less money. Those who’d invested upwards of Rs.50,000 for a GTX are sure going to be pissed with the GTX 1060 if that is indeed the case. 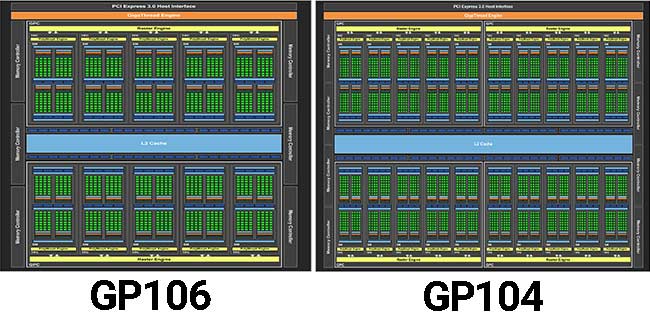 As for the memory, the GTX 1060 comes with 6 GB of GDDR5 VRAM. While this may be a little less than the 8 GB RX 480, it is priced to compete with the 4 GB RX 480 SKU, thus giving NVIDIA a slight advantage. However, if you happen to be one of those few lucky ones with a 4 GB RX 480 SKU that can be flashed to unlock the whole 8 GB, then you can start your victory dance now. The stock GTX 1060 is clocked at 1506 MHz with a bloost clock of 1708 MHz. This is, of course, a Founders Edition card so higher clocked after market cards are right around the corner. Or like in our case, they arrive before the Founders Edition cards do.

The GIGABYTE GTX 1060 G1 Gaming graphics card we’re reviewing comes with a factory overclock of 1595 MHz going all the way to 1810 MHz under boost. We did notice it go all the way to 1999 MHz while running Unigine Heaven 4.0. This extra juice is thanks to GPU Boost 3.0 which pushes your graphics card over the manufacturer rated boost clock till either a temperature or power threshold is hit.

If you take a look at GIGABYTE’s graphics offering for each GPU, then you first have the Founders Edition card, then there’s the WINDFORCE series with a slight overclock, then comes the G1 Gaming series which we have here and lastly there’s the XTREME Gaming series that is the best from GIGABYTE’s stables. Aside from these, there are one-off special SKUs like the GTX 1080 XTREME Gaming with a water cooling setup.

The card comes with the Gaming Mode enabled by default but for benchmarks we ramp it up to OC Mode.

The GIGABYTE GTX 1060 G1 Gaming features GIGABYTE’s WINDFORCE cooling solution and in particular the WINDFORCE 2X because of the two fans we see here. Each 90mm fan has protruding streaks to cut down on noise levels. Moreover, like all cards featuring Maxwell and Pascal architecture, these fans only switch on when the temperatures hit 60 degrees celsius. While the cards are silent till it hits this threshold, the sudden ramp up generates a noticeable sound level during gaming.

Underneath the plastic shroud lies the heatsink assembly which consists of two aluminium blocks held together by two copper heatpipes which supposedly feature a composite design. Why supposedly? Well, we didn’t chop it off to look inside but we’ve a good amount of confidence that it has said design feature. 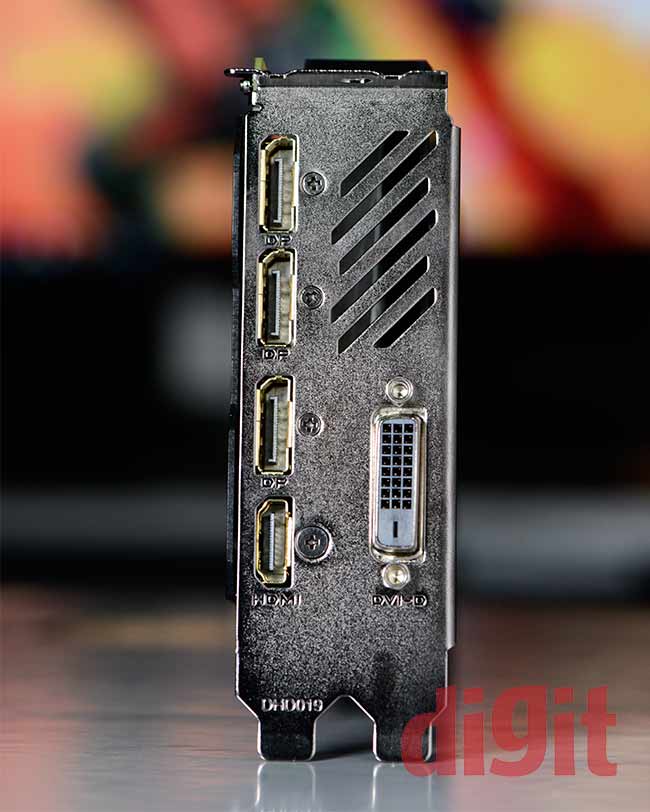 Coming to the connectors, the GIGABYTE GTX 1060 G1 Gaming features the standard set of connectors which we’ve seen since the GTX 980 which include – 3x DisplayPort 1.4, 1x HDMI 2.0 and 1x Dual-link DVI-D. The bracket is not completely sealed off and there are vents as you can see in the image above.

The GIGABYTE GTX 1060 G1 Gaming is a dual-slot graphics card. Dual-slot cards were essential towards ensuring an easy SLI configuration but since the GTX 1060 does not feature SLI, we can only look at this as a space saving design decision. The GIGABYTE GTX 1060 G1 Gaming uses an 8-pin PCIe power connector giving it a plenty of headroom to seek power should it require so. One difference that the GIGABYTE SKU differs from the Founders Edition is that it has an 8-pin connector instead of a 6-pin connector. While the reference card is designed for a TDP of 120 W, AIB cards with factory overclocks consume a lot more and hence the need arises for a better cooling solution and also for more wattage to handle those overclocks. In our benchmarks, we were able to extract 80% of the TDP from the GIGABYTE GTX 1060 G1 Gaming graphics card. 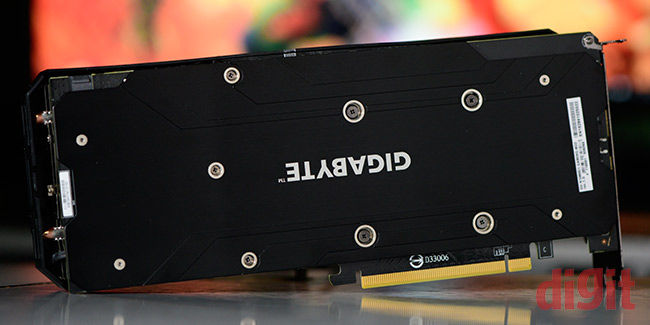 The GIGABYTE logo and FAN STOP label are both illuminated by RGB LEDs. GIGABYTE’s EXTREME ENGINE software is what you can use to play around with the lighting. If you’ve played around with LEDs on cards before then you know the drill. You can get it to pulse, flash, breath and other funky effects. While the whole RGB trend is starting to get a little stale, it exists because a good segment of the demographic still wants ‘em. Aside from this, there is a white LED underneath the power connector to indicate if it has been properly connector.

And lastly, we have the aluminium backplate which covers the entire card. Backplates are always a welcome feature and this one is no different.

We start off with the all favourite 3DMark FireStrike: (IN PROGRESS) 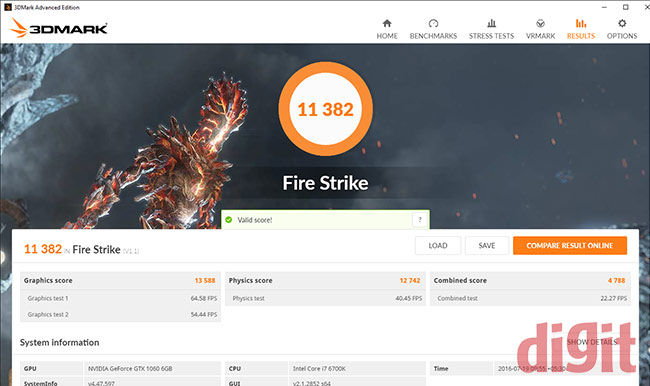 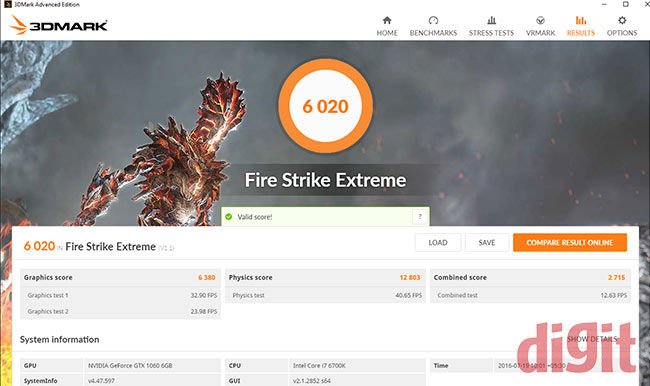 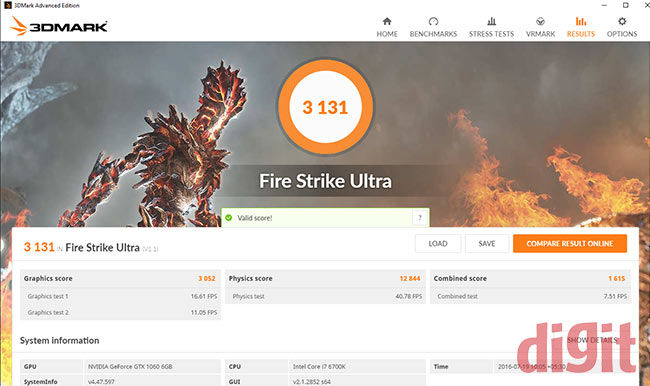 The GIGABYTE GTX 1060 G1 Gaming clearly is better than the AMD RX 480 which scored 2691 points in FireStrike Ultra and 5201 points in Fire Strike Extreme. 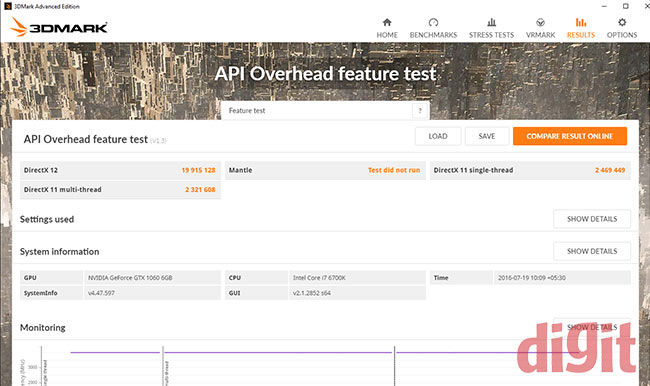 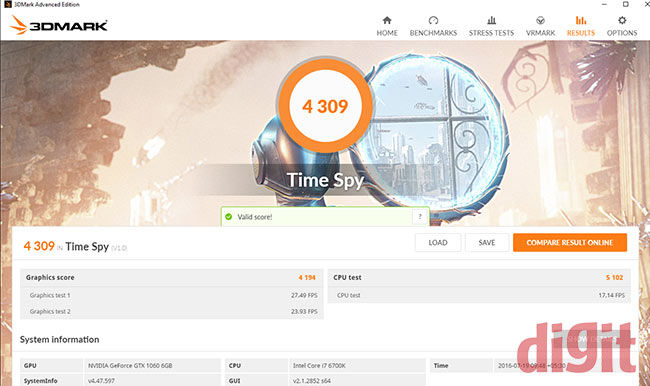 Time Spy is 3DMark’s latest DirectX 12 benchmark and the scores peg the RX 480 to be neck and neck with the GTX 1060. 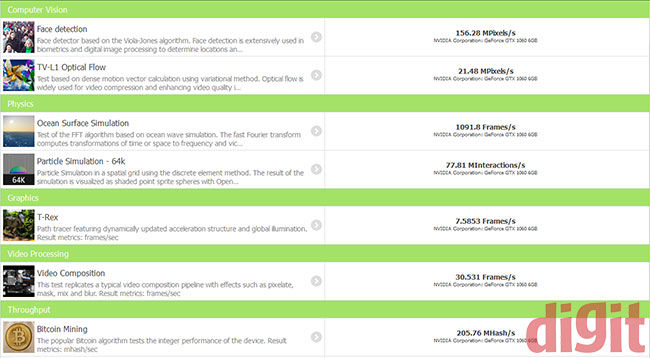 We’ve discarded our multi-software compute testing benchmarks in lieu of CompuBench which covers pretty much every single benchmark we used to test earlier. We are in the process of testing the RX 480 using the benchmark as well. Stay tuned for a comparison.

And here are the gaming benchmarks which you have been waiting for. 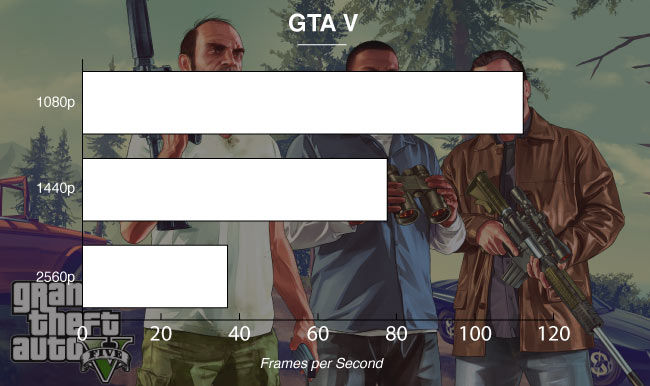 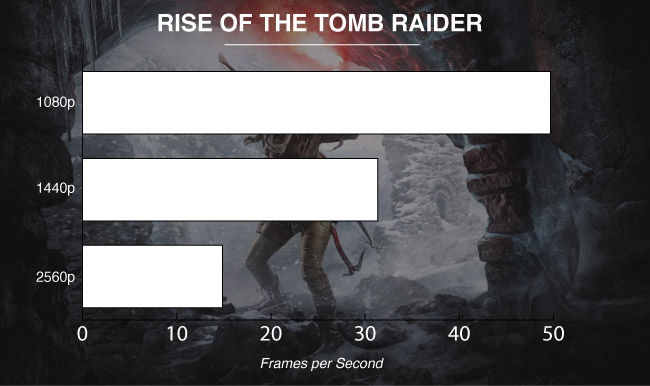 The NVIDIA GTX 1060 seems to be the better performer in Rise of the Tomb Raider. 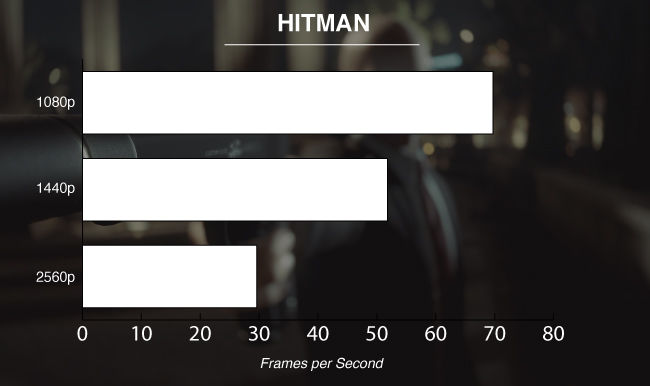 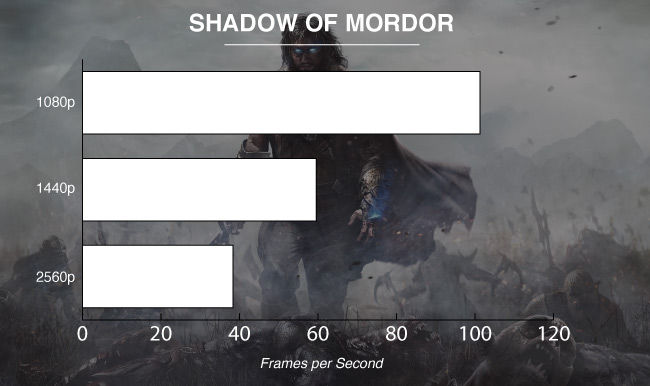 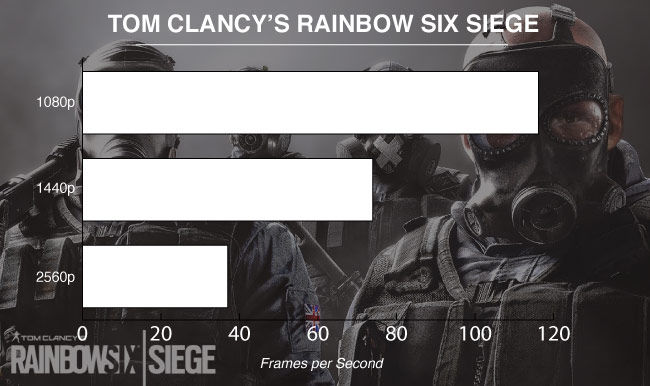 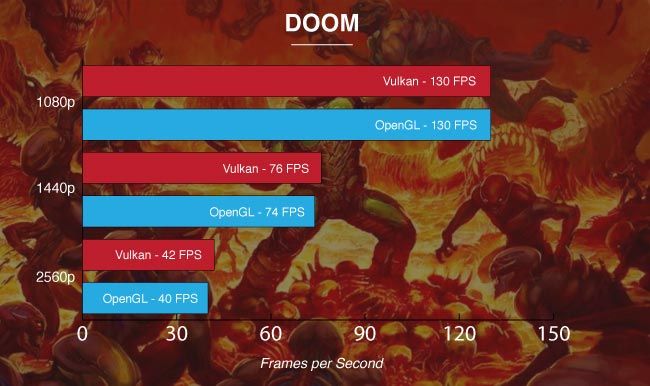 DOOM is a completely different story with the NVIDIA GTX 1060. We noticed hardly any difference while switching between APIs on the GTX 1060. While with the RX 480, there was a tremendous 35% performance difference. Between the two, the AMD RX 480 was the better performer across all screens except on 4K resolution with the OpenGL API. 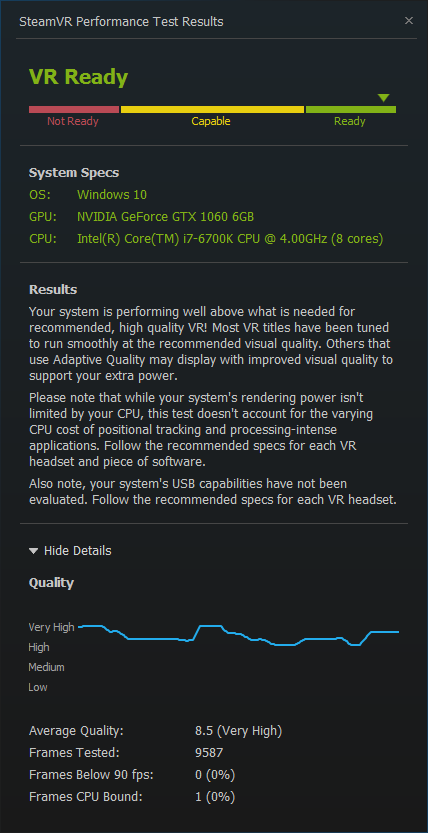 The NVIDIA GeForce GTX 1060 sure is a good performing card and with AMD RX 480 in the battlefield, NVIDIA needed a good product and they’ve delivered that with the GTX 1060. It’s got more memory than the RX 480 for the price (unless you have a unit that can be flashed to get the fill 8 GB) and it performs slightly better than the RX 480 in pretty much most games. The RX 480, however, makes the best use of Vulkan API and DOOM runs much better on the AMD RX 480 with the GTX 1060 gaining a minor lead at 4K resolution using OpenGL. This holds true if the cards are equally priced. However, AIB cards will be priced in the vicinity of the Founders Edition in India and in all likelihood the AMD card might end up being a better deal if NVIDIA partners don’t price the card right in India. One major loss with the GTX 1060 is the lack of SLI and for a price conscious market like India, that definitely matters.

Coming to the Gigabyte GTX 1060 G1 Gaming, it’s a pretty good non-reference card given the improved cooling solution i.e. the WINDFORCE 2X and the factory overclock. If you’re in for some RGB goodness then GIGABYTE has you covered on that front as well. What you need to keep in mind is that there are three overclocking profiles and should you ever need a little extra juice then using the provided software – XTREME ENGINE – should suffice. Also, you can always overclock the card further. Overall, the GIGABYTE GTX 1060 G1 GAMING is a pretty feature packed graphics card with a slightly higher price of Rs.25,499.