The Corsair Obsidian 550D is advertised to be a silent case. To find out whether this new case is balanced well between silent operation and cooling or whether it is a tradeoff between either silent operation or cooling, read on!

Another month, another Corsair gaming cabinet. Corsair is seriously trying to bombard the component market with its new and frequent case launches every once in awhile. This time around, we have the Corsair Obsidian 550D, their first ever case aimed at silent PC builders. If you’ve read our cabinet comparison test which we featured in the Digit magazine (February 2013), then you may know that we had a few silent cases included in the test such as the Cooler Master Silencio 650, the Antec P280 and the Antec Solo II. The Obsidian 550D from Corsair joins their ranks as it too has sound absorbing material everywhere inside it.

Exterior Design and Features
Starting from the front of the case, you’ll notice that the 550D has a brushed aluminium front panel door. The power and reset buttons along with the usual mic and headphone jacks lie at the front of the case. Corsair has included only two USB 3.0 ports at the front, but that is okay than having no USB 3.0 ports at all. The shift towards USB 3.0 has to be made by every case manufacturer even on their cheapest of cases as soon as possible; nonetheless we would have liked at least four USB 3.0 ports on the 550D considering its price. Moving forward, we noticed that the aluminium front panel door does not have layer of thin aluminium stuck on a plastic sheet as seen on most cases these days but instead, Corsair has made the door completely out of a thick block of aluminium which is obviously a good thing when you speak of durability.

This thick brushed aluminium front panel door has detachable hinges or clasps on either side and you can open the door from the right as well as the left due to these simple clasps. They’ve included extra clasps with the case accessories in case someone breaks the door hinge but we don’t think that the door hinge is prone to breaking easily as it is built sturdily but this forward thinking from Corsair is a welcome added advantage. Behind the door we have four plain 5.25” drive bays and just below them there is a big push-to-remove noise prevention plastic panel after which there is a magnetic fan filter for the two included 120mm fans behind it.

Going to the left side panel, you’ll notice that Corsair has added yet another push-to-remove plastic panel on the side panel itself. This plastic panel hides the underlying magnetically attached fan filter which is thin and has small but flexible magnetic strips attached to it for ease of use. This plastic panel also has noise dampening foam on it’s underside in order to decrease the sound from inside the case. Below this fan filter there is space to attach two 120mm or 140mm fans and the fan mounts have rubber vibration dampeners already installed on them. The side panel is strongly built and has quite some weight to it which is also partly because of the pre-applied sound dampening foam on its inside.

Up top, the Corsair Obsidian 550D has another one of those plastic noise reducing panel or inset below which lies another magnetically attached dust filter and space for mounting two more 120mm or 140mm fans. So in terms of mounting fans for cooling, you are pretty much covered as you have plenty of optional fan mounts in this cabinet.

One of the better features of the 550D are the included push buttons on the rear side of the case which when pushed, release the side panel. This push-to-release button or latch based mechanism is a boon for most enthusiast PC builders as they don’t have to search for a screw driver or twist their fingers on tight thumbscrews when they frequently open the side panel. 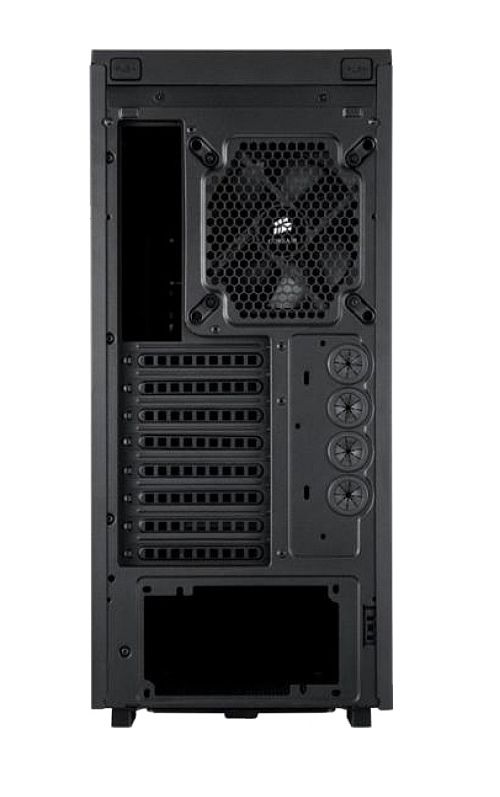 Below these push buttons is the usual rear case panel with a 120mm exhaust fan pre-installed. There are four rubber water cooling grommets below the fan area at the back of the case. These grommets can be used to route liquid cooling tubes if you plan to build an externally placed liquid cooling setup. Below the I/O shield area, Corsair has included eight PCI expansion brackets and at the bottom you have a standard PSU mounting area. The Obsidian 550D sits on four completely rubber based horizontally “L shaped” stands and keep vibrations from the case on your desk at bay. Corsair has also included a slide to remove fan filter for the PSU at the bottom of the case.

Interior Design and Features
Opening the side panel of the case we saw that pretty much everything inside was like every other good Corsair case. The all black paint job looks cool and with strategically placed rubber grommets for cable management around the motherboard tray, the 550D can easily be used to do a good job at cable management. At the bottom, we have the PSU area with raised rubber spacers which will keep the PSU firmly held and also reduce vibrations. The PSU mounting area has foam around its frame for more vibration dampening. 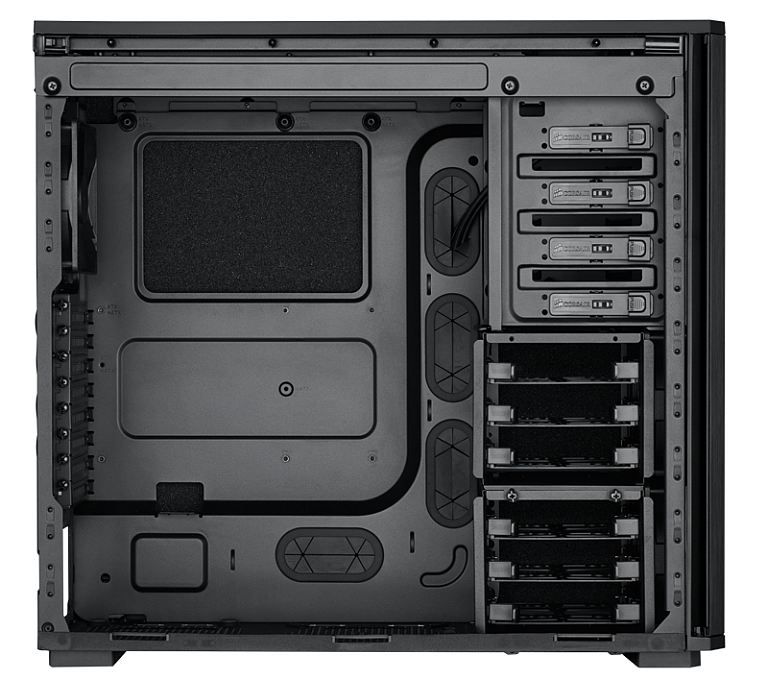 Speaking of drive bays, all the four 5.25-inch bays have tool-less mounting mechanism which uses sliding clamps for holding drives. On the other hand, the HDD/SSD mounting bays have slide out trays and you can tool-lessly mount 3.5-inch HDDs in them. SSD mounting requires you to screw down the drive on these trays.

The case cables inside the Obsidian 550D are covered in all black and they blend in with the all black interior of the case very well.

Accessories
The bundled or boxed accessories that come with the Corsair Obsidian 550D include the regular standoffs, screws for installing the motherboard, screws for drives, Screws for the PSU, Screws for fans and more screws for a bunch of other uses. As mentioned earlier, they’ve included extra clamps for the front panel door in case you break the existing ones. For cable management, Corsair has also included cable ties and two sticky cable holders. 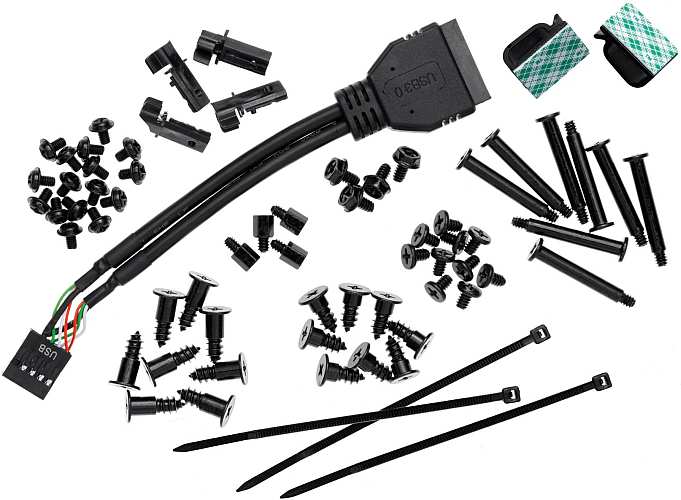 Since the case comes with a USB 3.0 header, the accessories included with the 550D have a bundled USB 3.0 to USB 2.0 converter cable header as well.

Results and Performance
In terms of pure performance when you speak of internal cabinet temperature, the Corsair Obsidian 550D was not amazing by any means. At an ambient room temperature of 28°C, the 550D had an internal case idle temperature of 38.5°C and when the test bed was under full load, the internal case temperature shot up to 45.5°C. We were a bit surprised with these results and in order to verify, we stress tested the test bed again but it yielded the same results. As it turns out, the use of those plastic panels for dampening sound in front of the installed fans at the front intake and also at the side panels are to blame. Because, when we tested the case again with those plastic panels removed (but the dust filters were kept attached) there was a drop in the case internal temperature by about 6.5°C under load. Sure, the case was absolutely silent when we closed all the extra plastic panels but these same panels tend to decrease the cooling potential of the case. This is where the Obsidian 550D lacks and we hoped it wouldn’t do so. But if you only think of a very silent case, the Obsidian 550D wins hands down.

Verdict
We know this case is meant for silent system builders but when it comes to performance, there’s absolutely no reason one can give as to why they should run their system hot when they can get some other cases in the market that does the job of being silent as well as keeping it cool inside the case. Sure, the Corsair Obsidian 550D has plenty of great features, a nice and subtle design, excellent cable management options, an amazing build quality and is an extremely silent case but with its performance we are sad to say that it just does not justify the price you will pay for the case. At Rs.11,999, it is a bit costlier than the Cooler Master Silencio 650 which was our best buy award winner of the cabinet comparison test in this price bracket and much more costlier than the Antec P280 which aptly has a street price of about Rs.8500. The Antec P280 at the price has most of the features which you get with the Corsair Obsidian 550D and it has support for installing XL-ATX motherboards too and is a well balanced case in terms of noise dampening and performance so you can think of considering it for your silent build for sure.