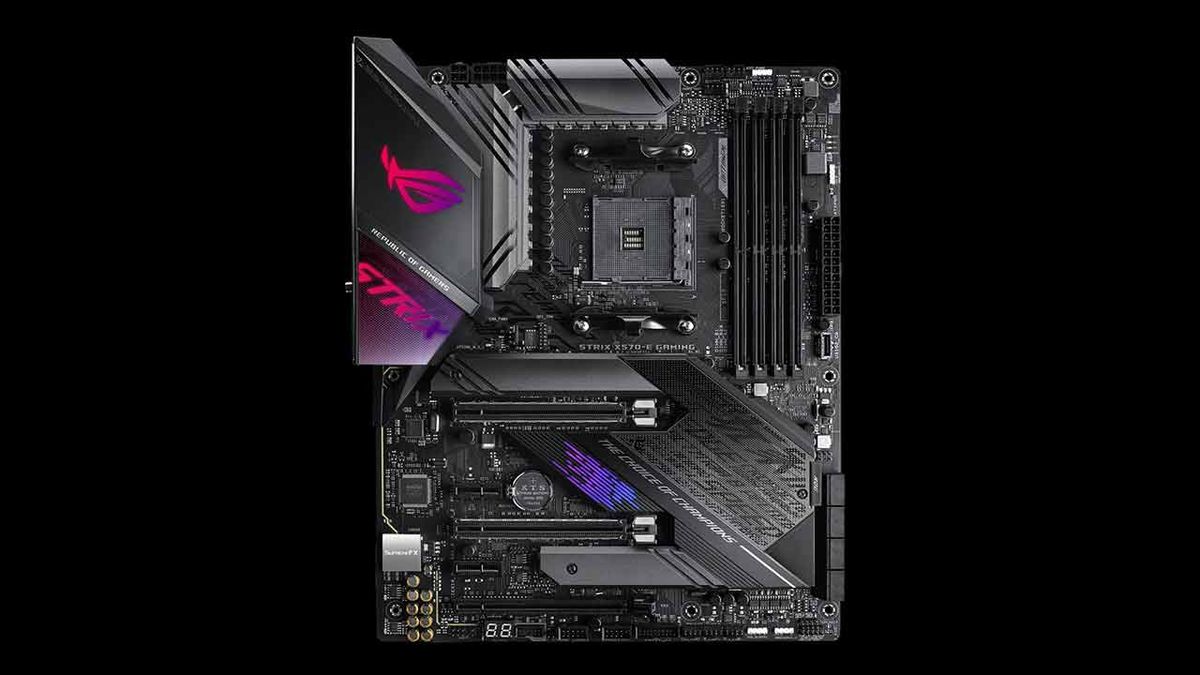 With the X570 platforms unique features, both the power requirements as well as the pricing have gone up considerably. Up until now, and AMD system used to be cheaper to build but with the X570 platform that advantage is longer present. This very board costs `27,499 which would have otherwise cost around 20K had a similar feature set been provided on the X470 platform. That being said, the ASUS ROG Strix X570-E Gaming is a well-rounded board that’s designed to make the most of AMD’s new platform.

ASUS has built up quite the portfolio for its X570 chipset. From the top-of-the-line ROG Crosshair to the budget friendly Prime X570-P, there’s a board for every budget and the X570-E Gaming sits in the centre of the lineup. It differentiates itself from the X570-F Gaming by including an additional LAN port (which happens to be 2.5G), Intel AX200 Wi-Fi and Bluetooth 5.0 chip. It also has three full-length PCIe x16 slots allowing you to set up 2-way SLI or 3-way CrossFireX in an x16 or x8/x8 or x8/x8/x4 configuration. At `27K, this isn’t a cheap board by any metric but then again, with the X570 chipset, none of the new boards are.

ASUS’ STRIX branding makes use of black prominently with red and grey being used for the accents. The packaging looks fairly simple with just the key elements being highlighted.

To view the detailed specification list for different versions of the motherboard, please refer to ASUS’s official website.

Being a mid-range board, you don’t get a lot with the ASUS Strix X570-E Gaming motherboard but there is additional value in the form of the thermistors, Wi-Fi antennae, and extension cables for RGB and ARGB LED strips.

Here’s the list of the entire contents of the box.

The ASUS ROG Strix X570-E Gaming is a full-sized ATX board so it has plenty of real estate to include a wide assortment of features.

The board makes use of a 6-phase VRM design that’s spread over 12 power stages. You can see all of them covered with a heatsink and it even has a heat pipe running through it. The heatsink in question is made from two machined aluminium blocks and isn’t a well-spaced fin stack that we’ve seen on some of the other designs. Either way, it gets the job done with regards to cooling the MOSFETs.

Since we’re on the topic of VRMs, it makes use of Infineon IR35201 configured in an 6+2 mode without any doublers. For the power stages, it uses Infineon IR3555 for the CPU VCC and IR3553 for the SoC. The former can handle 60 A whereas the latter is capable of doing 40 A. For the memory, it uses a Vishay SiRA14DP which is rated for 58 A. Overall, the VRM on the ASUS ROG Strix X570-E Gaming is capable of handling the high current demands of overclocking even the top-end AMD SKUs.

The four RAM sockets are closely packed with release levers on just one side. Thankfully, they’re on the top, so removing the DIMMs shouldn’t be a pain and won’t require you to remove the GPU first.

There is a lot of shielding around the expansion slots. We can clearly see that it maintains a clean aesthetic by melding the NVMe heatsinks with the dust guards. Underneath the dust guard lies the PCH fans which have become common on the X570 boards owing to the high TDP of the PCH. Blame PCIe 4.0 if you will. With the 3rd Gen Ryzen platform, the Processor can do x24 PCIe 4.0 lanes of which x16 are for graphics, x4 for NVMe and x4 for the downlink to the chipset. So PCIe full-length slots get their bandwidth from the processor as well as the PCH when all three slots are populated. If you’re going to be using just the two, then all the lanes will be sourced from the processor.

For the audio, the ASUS ROG Strix X570-E Gaming uses a Realtek ALC1220 which offers 7.1 channel audio output and you have the usual bunch of “audio caps” with it. Also included are dual OPAMPs and the entire assembly together is called SupremeFX S1220A. ASUS has included a DTS software solution with this motherboard the way MSI tends to ship their products with the Nahimic audio suite. The DTS solution has three profiles – Soundscape mode, Aerial mode and Tactical mode. All profiles are geared to provide positional cues based on the selected modes. The last one i.e. Tactical mode will put-up an overlay on your game screen to provide visual cues for the audio direction. Certain competitive games consider this cheating, so be careful while using it. You never know when the anti-cheat engines might flag such solutions. As of now, you’re relatively safe.

The rear I/O has a sufficient set of connectivity options. There are three USB 3.1 Gen 2 Type-A ports, one USB 3.1 Gen 2 Type-C and four USB 3.1 Gen 1 Type-A ports but no PS/2 port. You can hardly find any high-end or mid-range keyboard with this legacy port anyway so there’s no love lost there. Then there’s a DP and HDMI port for your video output should you have an APU installed. A black coloured 2.5G LAN port and a red coloured Intel LAN port alongside which lie the SMA connectors for the Wi-Fi antennae. This is followed by the audio jacks and lastly, there’s a BIOS flashback button above the USB ports. Ideally, we’d like these buttons to have some sort of protection to prevent accidental presses. The entire rear I/O panel comes fixed on the board and there’s a lighting panel on the rear I/O shroud. The entire assembly looks quite classy all sides.

At the time of testing, the board was still using AGESA 1.0.0.3 which allows the AMD processors to properly hit the advertised frequencies. The upcoming AGESA 1.0.0.4 microcode is set to further improve the all-core boost clock speeds and deliver shorter boot times.