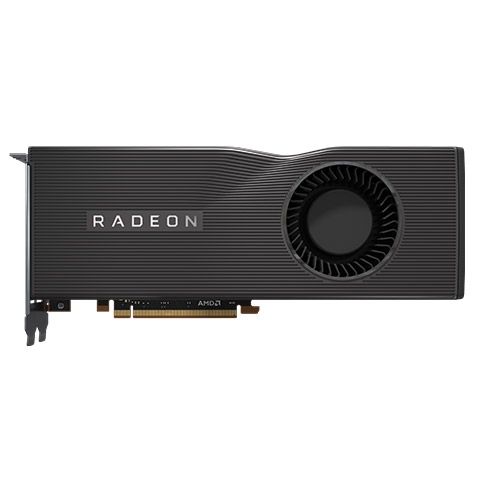 AMD’s Navi seems to be off on a good start. The new architecture is not only performing better than competing solutions but is also better priced and thus offering better value for money in the Indian market. Having proven itself to be competitive, we should start to see more gamers picking up the RX cards for mid-range configurations unless NVIDIA responds with price cuts on their RTX 20-series and RTX Super cards. As AMD inches towards the top of the stack, we are excitedly waiting to see how the GPU landscape evolves over the coming year. AMD’s 7nm+ cards, Intel’s new discrete GPUs and NVIDIA’s Turing-refresh are all slated to be launched in 2020. The AMD Radeon RX 5700 XT and RX 5700 with their new RDNA architecture are poised to carve a good share of the GPU market for now.

AMD finally unveiled their Navi-based graphics cards at COMPUTEX 2019 earlier this year to much excitement for gamers worldwide. It had been a while since AMD had a proper graphics card in the high-end segment. The Radeon Vega 64 and Vega 56, followed by the Radeon VII that was announced at CES 2019, had all been good attempts at grabbing the GPU crown from NVIDIA but AMD’s recent GPU launches have all fallen short. However, AMD has been the favourite when it comes to providing gamers value for their hard-earned money. NVIDIA’s pricing has always been way higher because that’s what brands do when there is no competition. AMD’s continued attempts at providing a high-end graphics cards have helped keep NVIDIA’s high-pricing in check. That trend has continued with these new cards as well, as you’ll see later on.

That said, NVIDIA still has the advantage because of the hardware-accelerated real-time ray-tracing capabilities, a feature that continues to see little adoption. At E3 this year, several major game developers and publishers, and even console manufacturers announced that their next titles would start incorporating ray-tracing. Cyberpunk 2077 is the biggest of the lot. The key difference here is that all graphics cards can perform ray-tracing, NVIDIA RTX cards have dedicated hardware elements to perform ray-tracing whereas the rest of the GPUs use their normal shaders to do the same. Essentially, it’s an advantage that rarely is ever used.

Coming to the Radeon RX 5700 XT and RX 5700, these cards feature AMD’s new RDNA architecture. A design that’s primarily GCN with some elements of RDNA. Think of Navi as an augmented version of GCN which takes the best of GCN and compensates for its shortcomings with new Compute Units (CU), improved graphics pipeline and a multi-level cache hierarchy. We can take a closer look at the specifications below.

We’re not looking at the Radeon VII but the two Vega cards right before it -- Radeon RX Vega 64 and Vega 56. Having moved to a 7nm manufacturing process, Navi allows for higher clocks while saving power as well. Thanks to the smaller transistors, we can also see that with the Navi 10 GPU, AMD has managed to squeeze 10.3 billion transistors onto a die that’s roughly half the size of the Vega 10 GPUs. The Compute Units still feature the same number of Stream Processors i.e. 64 but there have been other improvements by means of an additional scheduler which allows it to queue a lot more instructions and there’s an additional scalar unit as well which helps with increasing math performance.

The improvement with the clock speeds are quite considerable. The peak boost now goes all the way up to 1905 MHz with the total board power scaling up to 225W as per the specs. If there had been more CUs, then we’d have seen clock speeds closer but better than the Vega 10 based GPUs. The other major switch happens to be the memory type which is now GDDR6 instead of HBM2. GDDR6 is way cheaper than HBM2 and has reduced bandwidth per chip, so you have to use more chips to get the same bandwidth but the overall cost savings make it easier for AMD to price the cards better. The higher bandwidth of HBM2 is useful in very few scenarios such as super high-resolution gaming, AI workloads involving massive datasets, etc. We used the word super to qualify a much higher resolution than the current 1440p and 2160p resolutions that are increasingly becoming common with gamers. The current trend is to opt for high refresh-rate monitors with resolutions around the 1080p-1440p mark since good 4K high refresh-rate monitors are still expensive here.

Our test rig has been upgraded to keep up with the times and the new Windows releases. This means all our legacy scores are not comparable, especially given the fact that CPU performance has gone up by a significant margin. Here’s what we’re running at the moment.

Please note, the scores for the Vega 64 and RX 590 are not freshly tested but older scores obtained when we had received the graphics cards. The rest have been re-tested since we have those cards with us.

We start with the synthetic benchmarks within 3D Mark to see how the new Radeon RX 5700 XT and 5700 fare against the other cards in the market. 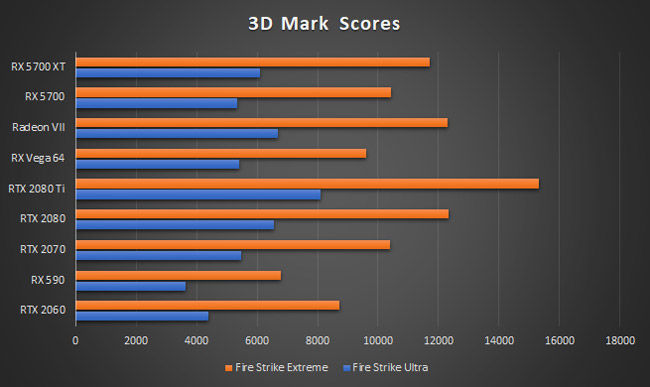 We can see that the Radeon VII is still better than both new cards but not by a vast margin. The Radeon VII launched at $699 whereas the RX 5700 XT costs $399 and the RX 5700 costs $349. So for the new cards to come this close at a much lower price point shows how much more efficient and performant the new Navi architecture is. 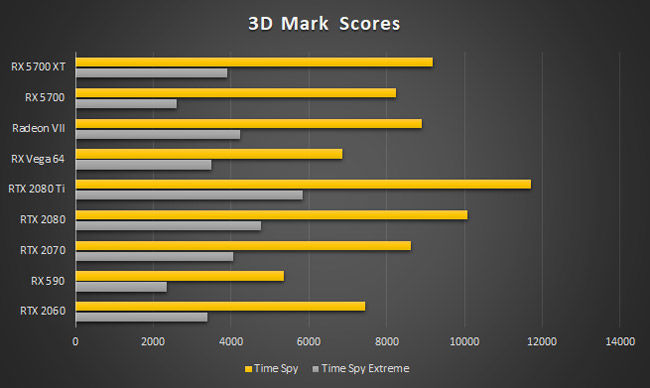 Even in Time Spy and Time Spy Extreme, we see a similar pattern but the Radeon VII has slightly lower scores in Time Spy whereas in the Extreme preset it scores better. Compared to the competition, the Radeon RX 5700 XT is still better than the NVIDIA RTX 2070 and the RX 5700 scores lower than the 2070.

Moving on to our game benchmarks, we get to see a real-world representation of how these new graphics cards perform compared to the competition. 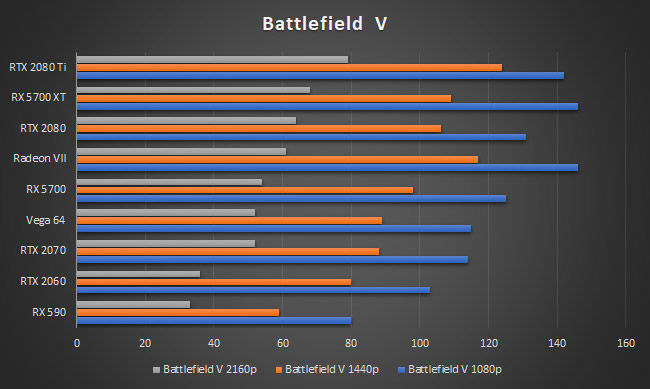 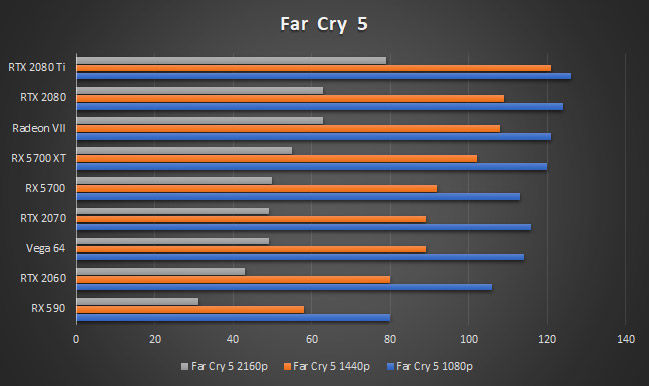 It seems the good folks over at Ubisoft haven’t made much of an improvement with the game engine between Far Cry 5 and Far Cry New Dawn. We found both benchmarks to follow the same curve. Far Cry New Dawn’s scores were well within the margin of error for even run. Here we see a trend that seems more in line with most of the benchmarks we ran. The RX 5700 XT performed better than the RTX 2070 and even the older Vega 64. The RX 5700 equalled the RTX 2070 at 4K resolution but the differences became more apparent at lower resolutions as the RTX 2070 creeped ahead. Even here, we see the RX 5700 coming ahead of the RTX 2060. 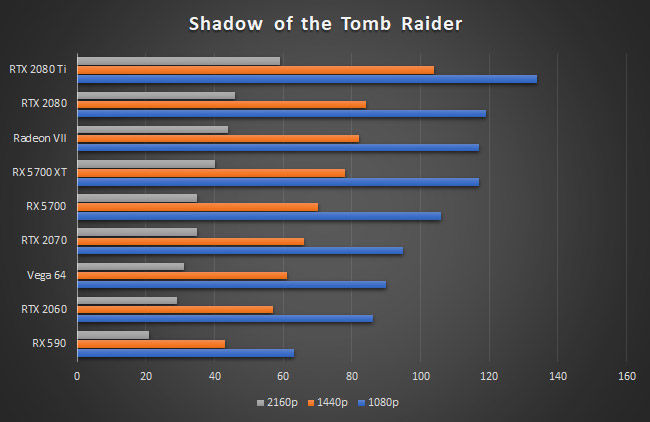 Shadow of the Tomb Raider sees the same curve yet again but this time, the RX 5700 XT is ahead of the RTX 2070 across all resolutions. The same goes for the RX 5700 when compared against the RTX 2060. 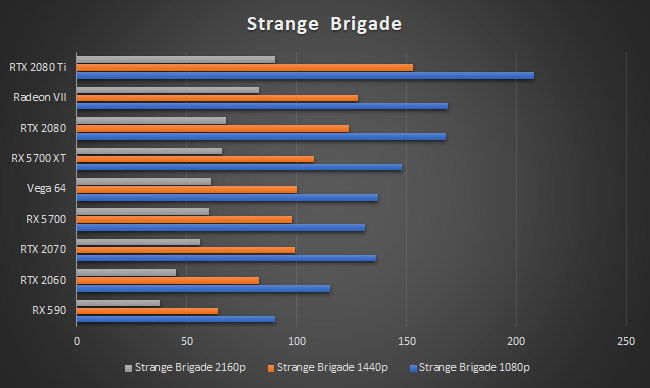 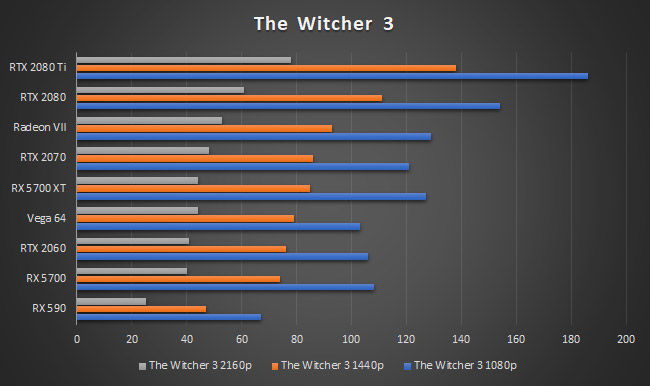 We only had a few hours to overclock the RX 5700 XT and RX 5700 because the first set of drivers provided had issues if any of the power and frequency settings were tweaked. So we might have another go at getting slightly better scores than what we have thus far. We tried the Auto OC settings within WattMan and we tried messing around with the OC manually to extract whatever we could. Here are the results for the 5700 XT while we continue to work on the 5700:

Individually, the GPU clock and the Mem clock were bumped up to find out their peak values. The base clock could go all the way up to 2130 MHz whereas the memory could go up till 935 MHz without crashing the OS or failing the benchmark. With both parameters set to their individual peak values we couldn’t get a proper run and there would be a crash every single time we tried. We then tried lowering the base clock all the way down to 1950 MHz but the benchmark would still crash. So we set the base clock to 2100 and then started lowering the memory clock. At 930 MHz memory clock, the OS had stopped crashing but the benchmark was still failing towards the 3rd or 4th leg. So after having dropped the memory clock to 925 MHz, we finally ended up with the first successful run of Time Spy with a score of 9598. Compared to the highest score we’ve obtained thus far at stock clocks, which is 9193, this OC attempt got us a 4.41% improvement in performance. We still have some more experimenting to do with the base clocks and the board power to see if we can get more synthetic and gaming performance. 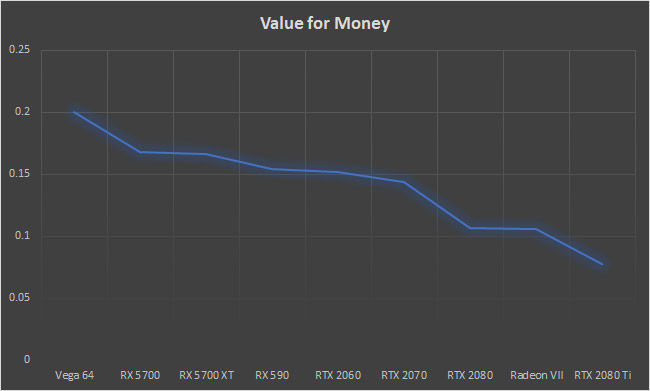 This calculation is done without considering the game bundles that both companies provide with their partner cards. NVIDIA’s offering Wolfenstein: Youngblood which retails for Rs.1,999 on Steam and AMD is offering the XBOX Game Pass (PC) for three months which would cost about Rs.1024 for that time period. If we are to compare the two offers, then the Xbox Game Pass provided by AMD gives you access to 113 titles including Metro Exodus and several other AAA titles with more to be added every month. NVIDIA’s Game Bundle just gives you one game.

Keeping the offer aside, all these cards provide more than 60 FPS at 1440p resolution. So all the cards here are more than capable of running the latest AAA titles without worry. The 2-year-old Vega 64 leads the pack followed by the Navi-based RX 5700 XT and RX 5700. We also wanted to include the older gen Pascal cards -- GTX 1080 Ti, GTX 1080 and GTX 1070 Ti -- but they are all out of stock whereas the ASUS branded Vega 64 are still in stock across multiple cities. With the performance of the RX 5700 XT being better than the RTX 2070 in most of our benchmarks, the AMD card is obviously the better choice. However, if you are undecided between the RX 5700 and the RTX 2060, then the RX 5700 not only scores high in terms of performance but also better priced. Overall, the AMD RX 5700 XT and the AMD RX 5700 displace the RTX 2070 and the RTX 2060 from the sweet spot. The only reason you would go with the NVIDIA cards would be to avail hardware-accelerated real-time ray-tracing which barely any games have properly incorporated.