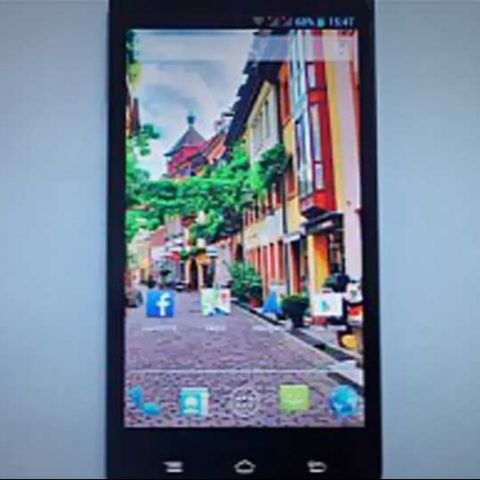 The Videocon A55HD falls in the category of your run-of-the-mill quad-core budget Android smartphone running on the MediaTek SoC. What the smartphone brings to the table are good looks, decent build and a smooth touchscreen. On the downside the performance of the camera is average. The preloaded apps are nothing to boast about. If looks are important to you, then you can consider the Videocon A55HD smartphone. If not, you have a plethora of budget quad-core smartphones to choose from in this price range.

Videocon has entered the A55HD in the budget quad-core smartphone race. The specifications of the smartphone are something that we have seen on a large number of recent devices from other manufacturers. Is the Videocon A55HD just another quad-core smartphone waiting to be lost in the crowd, or does it bring features that will help it shine? We find out.

Design & Usability
The Videocon A55HD runs on Android 4.2.1 Jelly Bean and there is no skin overlaying the OS. The touchscreen of the smartphone and the response is smooth.

The build of the smartphone is good. The front of the A55HD has the display with the three capacitive buttons below it. These buttons only light up once you touch them. The back of the A55HD has a plastic finish to it, very reminiscent of the Xolo Q1000. It is jet black which makes it look sexy but it is a fingerprint and dust magnet. The sides of the smartphone have a textured silver strip that adds to the design and not to the utility. The left side has the volume rocker and the top has the power button and the headphones jack along with the microUSB port. The design of the smartphone is slim and sexy even thought the form factor rests with the tried and tested.

Adding to the looks of the A55HD is its 5-inch IPS display. The display is vibrant and sharp. It performs great for watching videos and reading text. The viewing angles on the smartphone are wide as well.

Overall, the Videocon A55HD is just like the other budget 5-inch quad-core smartphones in its looks, design and usability. It does distinguish itself with a jet black look overall and this will help the device stand out from the crowd.

Features
The Videocon A55HD brings a feature set we are already familiar with, a 5-inch 720p display, a slim form factor, the 1.2GHz MediaTek MT6589 quad-core processor, and an 8MP camera. Just to make the picture clearer, here is a quick look at how the specifications compare with the competition.

As you can see from the table above, the specifications of the Videocon A55HD are at par with the competition. The Spice Stellar Pinnacle Pro is the one that stands out with the highest built-in storage and the biggest battery.

The Videocon A55HD comes preloaded with the V-Store and FunZone app. The V-Store app gives you access to a bunch of apps, some of which we have seen on the Google Play store as well. The apps are divided into categories such as hot, arcade and action, entertainment, chatting and social, tools, news and Job. In the past we have seen the likes of Micromax and more offer their own app store in addition to the Google Play store.

Funzone on the other hand gives users access to content such as cricket alerts, love guru, naughty jokes, astrology packs and more. The content of the funzone costs users Rs. 30 for 30 days or Rs. 3 per request.

Games like Temple Run 2, Angry Birds Star Wars and Dead Trigger ran on the Videocon A55HD with ease. One game that we have constantly faced a problem with on the MediaTek MT6589 powered smartphones is that Real Racing 3 didn’t run on them. The game surprisingly ran on the Videocon A55HD. Now we tested the game on the smartphone on July 24th 2013 and the game received an update on July 16th and we aren’t sure if the update fixes the game for the MediaTek SoC.

The call quality of the Videocon A55HD was good. The audio was clear at both ends but there ere a few times when we felt that the volume at full was still a bit too soft.

The A55HD did well in our battery tests. It ran for five and a half hours while playing a test video. The brightness and volume on the smartphone was set at full. The video was an MP4 720p movie running on loop.

Bottom Line
The Videocon A55HD falls in the category of your run-of-the-mill quad-core budget Android smartphone running on the MediaTek MT6589 SoC. What the smartphone brings to the table are good looks, decent build and a smooth touchscreen. On the downside the performance of the camera is average. The preloaded apps are nothing to boast about. If looks are important to you, then you can consider the Videocon A55HD smartphone. If not, you have a plethora of budget quad-core smartphones to choose from in this price range.