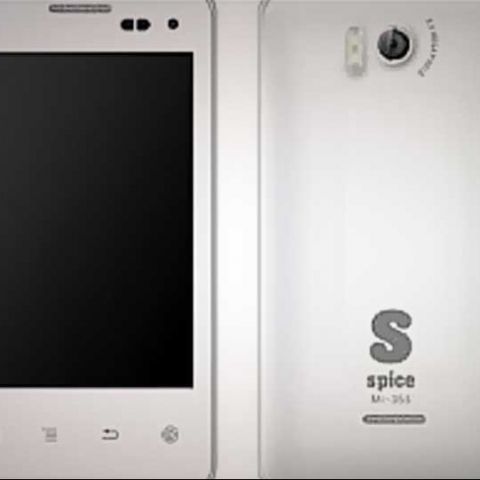 The Spice Stellar Craze MI-335 is a decent phone at the Rs. 7,000 price point, and gets the basics right with some minor hiccups. You get the basics of a smartphone and the fact that the device is dual-SIM is nice. The battery life is good and it runs most of the apps from the Play store quite well. On the down side, the keyboard of the device could have been better. Its form factor is very reminiscent of the iPhone and that isnï¿½t necessarily a bad thing. If you are in the market to pick up a dual-SIM budget Android smartphone then you can take a look at this device along with the Intex Aqua 4.0

There are numerous phones available under the sub 10k price point that boast of a smartphone OS but are plagued with underperforming hardware. We have seen the Samsung Galaxy Pocket and the Nokia Asha 300 perform quite well in this price bracket but have their own shortcomings.

Today we have with us the Spice Stellar Craze MI-355. The phone runs on Android 2.3 Gingerbread and Spice says that the device will be upgradable to 4.0 ICS. As of reviewing the device the update wasn't available. Is it worthy of being your first budget Android phone?

Design and Build
On first impressions, the Stellar Craze is very well built and has a form factor very reminiscent of an iPhone. It is quite light weighing a mere 93.2gms. On the face, the Spice Stellar Craze MI-355 has a 3.5-inch HVGA display with a resolution of 480x320, which is standard for the budget smartphones in this price range. Below the touchscreen you have the standard array of capacitive buttons –home, menu, back and search. The borders surrounding the display are quite thick and make the display look small. Overall it looks like a slight waste of space.

In terms of its connectivity options, the Craze MI-355 has the micro USB port at the bottom. The left of the device also houses the volume rocker. The top of the budget smartphone has the on/off/sleep/wake button along with the 3.5mm headphones jack. The rear has the 5MP camera along with a flash and the front has a 0.3MP camera for video chat. The front facing camera is placed in the top right corner.

The rear panel of the Stellar Craze MI-355 is pearl white, which is elegant. The biggest disadvantage is that it is glossy making it a fingerprint magnet. 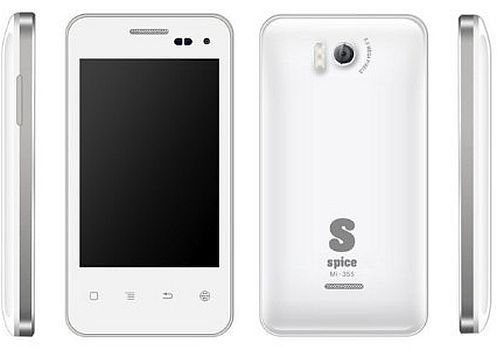 The design of the Craze MI-355 may be your run of the mill average Android phone, but the build quality is quite good. The border of the phone has a grey matte finish giving a two-tone shade, which is nice. From a distance, the device looks like the original iPhone and that isn’t necessarily a bad thing. But the large borders do make the screen look small and that is something we weren’t so happy with.

Features and Specifications
Under the hood, the Spice Stellar Craze MI-355 is powered by an 800MHz processor and has a mere 512MB of RAM. It has a mere 200MB internal storage that can be expanded to 32GB via a MicroSD card. Straight out of the box, the device runs Android 2.3 Gingerbread and will be upgrade to Android OS, 4.0 ICS. The OS gives you the option of five customizable home screens and you have the standard slew of widgets and apps to flood them with. One of the biggest USP’s of the phone is that it supports dual-SIM.

The Craze MI-355’s OS is however skinned and we aren’t the biggest fans of this skin. At the bottom of the screen are four options – call, contact, message and menu. These icons are quite cartoony in nature and we weren’t impressed with them. The lock screen of the smartphone is a simple drag to unlock, something that is a feature of stock Android 2.3 Gingerbread.

The Craze MI-355’s rear 5MP camera clicks average quality images, and there’s nothing to boast about here. If there is no memory card in the device, it won’t click picks so be warned. The quality of images from the camera isn’t great, so don't expect to be replacing your point and shoot. There is also no dedicated shutter button on the device.

For a phone that costs Rs. 7,000 you can’t expect more than what is on offer. The Stellar Craze MI-355 has a skin that may not appeal to all but it doesn't hamper the smoothness of the device. The fact that its dual-SIM means you can get rid of that second phone. PC Lingo has been used to identify the two SIM cards in the phone. The main SIM is called the Master SIM where as the secondary SIM is called the Slave SIM. Not that this affects the utility, but is a welcome change from the Standard SIM 1 and SIM 2.

Performance
The performance of the budget smartphone is quite acceptable considering the price you pay for it although it does have its share of hiccups. The benchmark scores of the budget phone aren’t the best but they aren’t bad either. It scores slightly better than the Intex Aqua which is a Rs. 6,000 budget Android phone in some tests. In the others the Intex scores better.

The display on the Spice Stellar Craze MI-355 is quite good. Sure it doesn't have a stellar resolution at just 480x320 but it gets the job done. The display is quite vibrant and faces the usual problem of glare under direct sunlight. The call quality on the device is good as well. The voice is clear at both ends and the basic job of calls is handled quite well. Although there were times when the person at the other end sounded like an echo. This happened to us twice in the duration of testing the phone.

One of the disappointing aspects of the Spice Stellar Craze MI-355 phone is the keyboard. The keys are quite cramped and it is uncomfortable to type on at times. The bottom line – spacebar, full stop, etc. are inconvenient and don't respond at times.

In terms of the pre-loaded apps, the device comes with NQ mobile security 6.6, Spice Gang (which looks like an old school Java app store), and NQ mobile vault. You also have access to the Google Play store for your other app needs.

Despite the 800MHz processor, apps seem to run quite well on the device. We played a few games like Angry Birds Space and more. The only down side to running apps on the 3.5-inch screen is that the edge of the display lack responsiveness.

Videos via the YouTube app ran quite smoothly. The viewing angles are nice but the audio output from the speakers was underwhelming.

The battery life of the device goes a little beyond 2 days. To check mail, some social networking, calls and messages, the device lasted us for two days. We needed to charge the 1420mAh battery towards the beginning of the third day.

Bottom Line
For a phone that is priced at the Rs. 7,000 price point the Spice Stellar Craze MI-355 is decent and gets the basics right with some minor hiccups. You get the basics of a smartphone and the fact that the device is dial-SIM is nice. The battery life is good and it runs most of the apps from the Play store quite well. On the down side, the keyboard of the device could have been better. Its form factor is very reminiscent of the iPhone and that isn’t necessarily a bad thing. If you are in the market to pick up a dual-SIM budget Android smartphone then you can take a look at this device along with the Intex Aqua 4.0