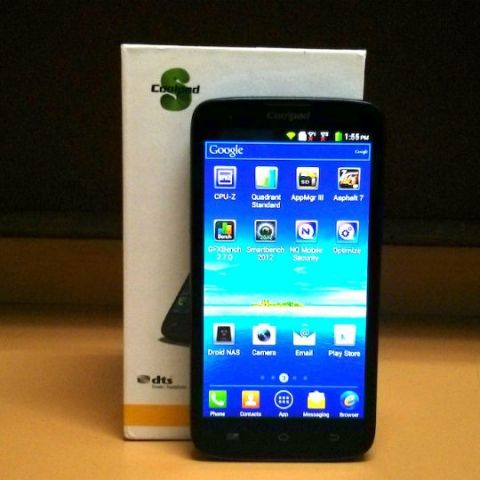 For the price you pay, you get a run-of-the-mill budget Android smartphone. The security features are nice, but for a holistic Android experience, you have devices like the Xolo Q700 available. You can also check out the Lumia 520 if you don't mind the Windows Phone OS. The Mi-515 has an average build and decent power under the hood. The battery life could have been better.

Coolpad is a smartphone manufacturer in China and they have partnered with Spice to launch the Mi-515 in India. The smartphone is priced at Rs. 9,990 and runs on the MediaTek MT6598 chipset. Is it worth your hard earned cash?

At a Glance
5-inch qHD display, candy bar form factor, plasticky back and dual-SIM capabilities are the most obvious features at hand apart from the quad-core processor and 1GB of RAM. The OS is fairly vanilla and you get some security apps preloaded on it including NQ Mobile Security, Vault and more. You can take a look and see how the specifications of the Spice Coolpad Mi-515 compared to other smartphones around the Rs. 10,000 price point.

The specifications of the smartphone are at par with what some of the competing devices in the same price range have to offer.

Design
The smartphone has a design very reminiscent of the Galaxy series of smartphones from Samsung, which is to say that it has a curvy plastic back with a 5-inch display at the front. Below the display we have the three standard capacitive buttons representing home, back and menu.

The rear of the smartphone houses the 5MP camera along with a flash. Rip out the rear cover and you have the slots for the two SIM cards. The Micro SD card slot rests here as well, but you don’t need to remove the battery to access it.

In terms of connectivity options, the smartphone has the volume rocker on the left, the power button on the right and the along with the microUSB port and the headphones jack resting on the top.

Overall, the design of the smartphone is good, but we have seen better-built devices in the sub-Rs. 10,000 price point such as the Xolo Q700 and more.

UI and Interface
For the most part, the Spice Coolpad Mi-515 has a vanilla UI but there is a light skin. Some of the icons and the apps listing page have been modified and you will notice some UI changes as well. But this doesn’t take you away from the core experience of the device.

The smartphone comes preloaded with a bunch of apps including security apps, Asphalt 7 and more. For the rest of your app needs, you have access to the Google Play store.

Performance
Since the device runs on the MediaTek MT6589 chipset, here is a quick look to see how it performs when compared to other smartphones in the same price range.

As you can see from the above benchmarks, the Spice Coolpad Mi-515 performs quite well when compared to the competition. One problem that we faced is that the built-in storage of the phone was low, and kept prompting us with a low storage message every time we wanted to download the 3D mark benchmark. Even when we switched to the microSD card storage, we still faced a problem downloading the app.

The touchscreen response of the smartphone is good for the most part. It is comfortable to type on and quite responsive. We have seen better touchscreen on budget smartphones, but there is nothing to complain about here.

The keyboard is well laid out, stock Android and the device is comfortable to type on. Be it playing games or browsing the Internet, the touchscreen response is good. The video files didn’t play. The MKV HD files audio wasn’t supported natively. AVI SD player however worked on the device.

The biggest downside to the display is that the resolution is low when compared to what the competition has to offer. Content on the display doesn’t look crisp and lacks sharpness. The videos don’t look very crisp and while reading text, the edges of the text looks slightly jagged. It would have been great if the smartphone has a 720p display just like the competition. But considering the price point, the smartphone could have had a 4.7-inch or even a 4.3-inch display, which would have increased the pixel density and increased the quality on the display.

In terms of its gaming performance, Angry Birds Star Wars and Subway Surfer and Dead Trigger ran very smoothly. The response of the touchscreen was good, the audio was loud and clear. Moving to the calling capability of the smartphone, put simply, it is good; no complaints here.

Coming to the security features of the smartphone, lets start with the NQ Security app. This app helps with virus detection on your smartphone, system performance, and backup content and anti theft. You have to sign up for an NQ account to activate the features and registering is as easy as inputting your email ID and selecting a password.

Another app is the Vault app. There are so many times when you have content on your smartphone such as images messages and more that you don’t want others to see when they use your phone. You can use the Vault app to simply hide all this content and there wont be a trace of it on the smartphone. So you can hide the content you want no one to see and let your phone be in your friend’s hands without any worries.

In terms of its battery life, the Spice Coolpad Mi-515 has enough juice to get through the day average you. In our continuous video playback test, the smartphone lasted for 5 hours with the brightness on full as well as the volume. The Wi-Fi was on as well. We have seen other smartphones in the same price range last for up to 6 hours so the battery life could have been better.

Bottom Line
For the price you pay, you get a run-of-the-mill budget Android smartphone. The security features are nice, but for a holistic Android experience, you have devices like the Xolo Q700 available. You can also check out the Lumia 520 if you don’t mind the Windows Phone OS. The Mi-515 has an average build and decent power under the hood. The battery life could have been better.