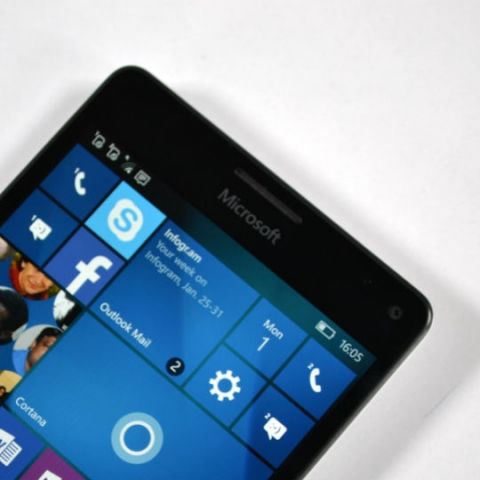 The Lumia 950XL isn't the phone that'll bring Microsoft the sales that it's looking for. The phone lacks good design elements for the asking price and there are just not enough apps on the Windows Store to recommend the phone to anyone. A lot of work needs to be done still.

Microsoft has been undergoing change for a while now. From a new CEO, to Windows as a service, to its first laptop ever, to a game changing augmented reality headset and so on, the company has been talking the talk. However, what’s never change is the state of Windows Phone. With Windows 10 though, Microsoft showed us some impressive features, enough to have us excited about the new Lumia flagships. However, the numbers have been dwindling for a while now. Microsoft sold only 4.5 million Lumia phone last quarter, with a year-on-year decrease of 57 percent. In short, the future of Windows for mobile doesn’t look good.

So, in the face of such adversity, is the Lumia 950XL the right phone to bring Microsoft back? Here’s the review.

When it started making Windows-based smartphones, Nokia once proved to all of us that metal doesn’t define premium. The company proved that a premium and good looking phone could be made out of polycarbonate material and be sturdier than many phones with metallic designs. But it’s not Nokia anymore is it? 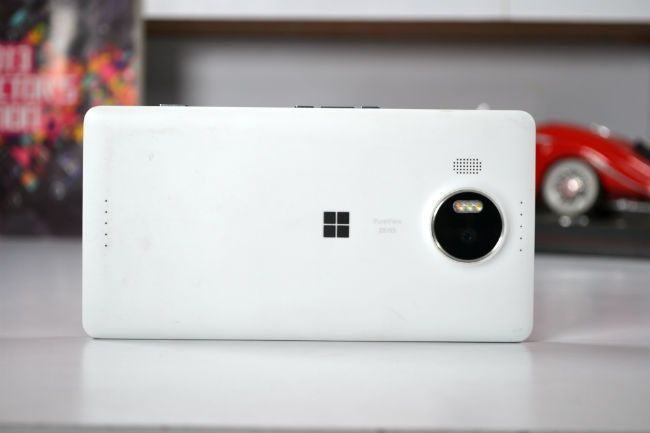 Phones like the Lumia 830, 920 and 1020 will never be questioned on the design point of view, but frankly, the Lumia 950XL is a plastic brick that should just not cost as much as it does. It’s not that the phone is heavy, or the fact that it lacks metal. The Lumia 950XL, to me, just doesn’t look good. I understand that Microsoft wants to deliver similar experiences across price brackets, but the fact is that if I’m paying nearly Rs. 50,000, I want more than what Rs. 20,000 would get me.

In fact, the bit about delivering similar experiences across price segments is also changing with Windows 10, but more on that later. From a build point of view, the Lumia 950XL is light and thin enough, but too plasticky to belong in the price segment that it is being positioned in. 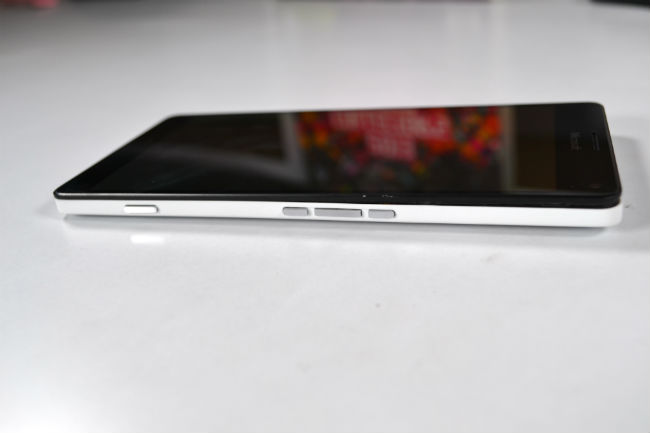 While Microsoft may have been stubborn about the build, the display is a different story. Lumia devices have always had some of the best displays in the market, the Lumia 950XL comes with a 5.5 inch AMOLED Clearblack QHD display. Interestingly, it seems while Microsoft did give in to the resolution race, it also made a clear point here. The Clearblack display looks as good in QHD as it did in FHD last year, and that’s just the point Microsoft has been making for ages.

Of course, it’s more effective while watching movies and viewing other content, but only slightly better. Bottomline, the display looks as good as ever and delivers a top notch touch experience, thanks to Gorilla Glass 4. 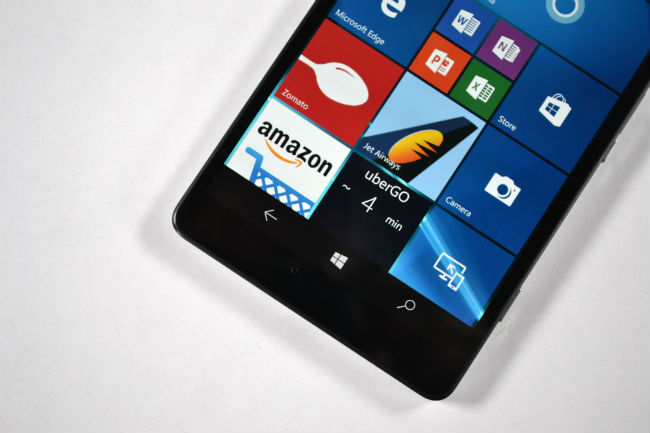 There’s not much to write when it comes to the UI Windows phones have used. Windows 10, like Windows 8 and 7 before it, delivers one of the smoothest UI experiences out there. It doesn’t look as colourful anymore though, which I think is good. The Windows 10 UI looks better suited to professionals and enterprise users, which I suspect is Microsoft’s target user-base.

What’s also worth noting is that Microsoft has made the experience snappier than before and quite similar to Android and iOS in some areas. While this is good, it just screams for Windows apps to be updated.

Yes, the app situation is still dismal in the Windows Store. Microsoft is trying to turn it around by selling the Universal Apps concept to developers, and with 200 million PCs already on Windows, it may even work. However, Microsoft also needs to get the apps that are already available on the Windows Store to update to Windows 10. In the current version, apps like Zomato, Evernote, Twitter and almost any other, look mismatched with the rest of the UI and the feeling is terrible.

The concept of Universal Windows Platform (UWP) lets developers build for device families instead of a particular OS. Microsoft says it will allow apps to work seamlessly across phones, tablets and PCs and from what I see through Microsoft's own apps and third party apps like Flipkart, it is indeed quite smooth. With over 200 million PCs on Windows 10, Microsoft’s seems to be hoping developers will build apps for Windows PCs, which will just work on mobiles and tablets as well, giving the Windows Store a big boost. Well, it’s going to be difficult with dwindling sales numbers, but one can always hope.

From a performance point of view, the Lumia 950XL is faster and snappier than any other Lumia smartphone till date. Of course, considering the fact that most of those other phones ran on the Snapdragon 400, there should be a more than substantial jump in performance, and the Lumia 950XL exhibits that from the get go.

Outlook works much faster, load times for apps (especially universal apps) load really fast and the phone just feels much more responsive than any other Windows-powered phone that I’ve used till date. Devices like the Lumia 930, 830 and others do not compare to the 950 XL.

Having said that, open Asphalt 8 and you once again shudder at the performance. It’s not that the game lags or is unplayable, the experience is just juddery, which is a result of the software and not the hardware. It further reinforces the belief that Microsoft wants this to be an enterprise phone rather than for the regular consumer.

Of course, the fact that this is a powerful phone was never in question ever since we saw continuum running on it. It's just not for gamers.

Speaking of which, Microsoft’s take on continuity amongst devices has been the most interesting so far. The Lumia 950XL, when connected to the Microsoft Display Dock, a monitor, keyboard and mouse, can function like a PC. Now here’s the thing, how many of us will really use that? More importantly, how many in India can afford to use that?

Cool and even useful as it is, the Microsoft Display Dock costs about Rs. 6000, which means the effective cost of your phone goes up to about Rs. 56,000. It’s a tough ask given the state of things with Windows is all I’m saying. In addition, the number of Universal Apps will be a big factor in whether continuum will be worth buying this phone for. For now, it works with Microsoft apps and some others, like Flipkart, and for those, it's pretty handy and fast.

Perhaps the only Microsoft feature in this phone that was really dissapointing was Windows Hello. Microsoft’s Iris-recognition tech is just not intuitive enough. When I’m sitting in brightly lit rooms, it keeps telling me to 'move closer' to the phone, while walking around outside, especially at night, Windows Hello is more or less useless. Most importantly though, even when it does work, it takes much longer than fingerprint sensors or even pattern or pin-based locks. It maybe useful on a Surface, which will be perched on a desk and unlocks in a second or two when you sit in front of it, but on a phone, it's just not intuitive enough to be used regularly. The time taken to type my six digit pin is much less.

If you ask anyone what they like most about Lumia smartphones, their answer most certainly will be the camera. The 20MP snapper on the Lumia 950XL keeps that legacy alive, but doesn’t really improve on it. If you’re in brightly lit conditions or in outdoor sunlight, the 950XL will take some of the best shots possible and it does well with details and sharpness in indoor conditions also. The low light performance is also above average easily. The problem though is that this is all in the rich capture mode.

While brightly lit conditions are covered, in the auto mode, the Lumia 950XL will often have trouble dealing with unevenly lit conditions, with a glare on one side of the image or slightly lower details. In addition, while Microsoft has successfully reduced the shutter lag and processing time, the photos still do need post processing, which is done by the algorithm in the background, while you continue shooting.

Overall though, the 950XL will definitely rank amongst the best camera phones in the market today and if that’s all you want, it’s worth considering.

The 3340 mAh battery on the Lumia 950XL is just about fine, meeting industry standards today. The higher screen resolution and more powerful processor are of course eating into it, but the Lumia 950XL should get most users through a full day quite comfortably. It’s not as good as the Samsung Galaxy Note 5, but just a little better than the iPhone 6S.

If Microsoft is really serious about selling its phones, then the Lumia 950 XL isn’t the phone that’ll bring it to the fore. The app situation aside, if sales numbers do really matter, then Microsoft has to focus on what’s selling, instead of hoping that consumers will appreciate what it provides. Features like fingerprint sensors, a more premium body etc. are important and whether Microsoft does it or some other OEM does, it just has to be done.