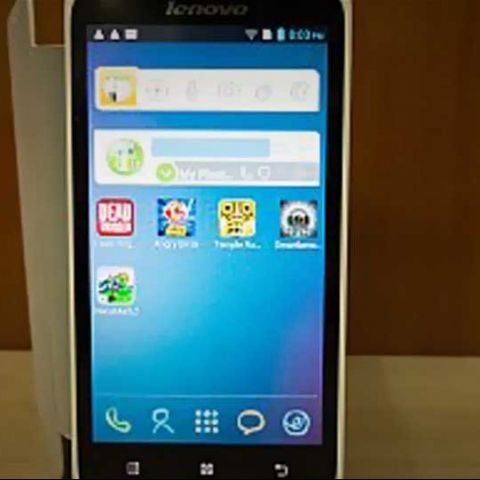 The Lenovo IdeaPhone S890 brings two unique features to the table - a nice cover which works like a smart cover, and a UI that is funky and may appeal to some. It is your run-of-the-mill Android smartphone in terms of other features. It won't run all the video formats but its multitasking capabilities are nice. You can consider this smartphone but there are better options available out there.

For a budget of Rs. 20,000, the consumer is spoilt for choices when it comes to smartphones running Android. You have the likes of the Samsung Galaxy Grand, which gives you TouchWiz, and some of the features and shenanigans that you’d get in a premium device. You also have the Xolo X1000, which is a well-built, beautiful smartphone giving you a vanilla Android experience. Apart from Android devices, you can also get the Lumia 720, which is one of the hottest selling Windows Phone 8 devices.

Today, we have with us the Lenovo IdeaPhone S890. The smartphone shows off a dual-core processor, an IPS display with a qHD (960x540 pixels) resolution, and an 8MP camera. Does it bring enough features to stand out from the crowd, or are consumers better off looking at the tried and tested available smartphones? We find out!

At a Glance
From the outside, the Lenovo IdeaPhone S890 looks like your run-of-the-mill Android smartphone with a 5-inch display. The smartphone runs on Android 4.1 Jelly Bean and has the same skin we have on the Lenovo IdeaPhone K860 and the S560. The smartphone even comes with a flap cover. The unique thing about this flap cover is that it works like the smart cover of the iPad which is to say that the display goes off when you close the flap cover and the comes on when you open it. It is nice to see the flap cover, as it adds more utility than protection for the display.

The specifications of the Lenovo IdeaPhone S890 aren’t stellar when compared to the competition. Sure, it has the largest battery and an IPS display but there are other impressive devices in the same price bracket available in the market.

Design
If it isn’t broken, don’t fix it. Following this policy, the Lenovo IdeaPhone S890 has a simple candy-bar form factor with curved edges found on a plethora of other Android-powered smartphones. Above the display you have the front-facing camera and the earpiece. Below the display you have the menu, home and the back capacitive buttons, which don’t eat into the displays real estate. Long pressing the home button brings up the multitasking menu. The bottom of the smartphone has the microUSB port. The right has the volume rocker and the top of the device has the headphones jack along with the power button.

The rear of the smartphone has a white glossy finish that is a fingerprint magnet. It also houses the 8MP camera along with the flash and the speaker grill. At 176 grams, the device isn’t the heaviest out there but does feel a tad heavy in your ones hands.

Overall, the design and build of the Lenovo IdeaPhone S890 is quite good. The flap unfortunately is white, which means that it will easily get dirty. In the same price bracket you have the Xolo X1000 which has a rubberised back giving it a premium build and a good grip. You also have the Lumia 720, which has a polycarbonate body making it one of the sturdiest devices in its price bracket.

UI and Interface
The lock screen of the smartphone is standard Android, giving users access to a directl shortcut to the camera and Google Now. Unlock the Lenovo IdeaPhone S890 and you will be greeted by the same UI we have seen on the Lenovo IdeaPhone K860 and S560. By default, you have access to three home screens but you can have a total of nine home screens to load with apps and widgets.

One of the preloaded widgets on the Lenovo IdeaPhone S890 is the Lotus widget. This gives you quick access to Facebook, Maps, Music, camera and the play store by default. The preloaded apps on the smartphone such as the camera, messaging calling, calculator and more have a very Tron-like neon look which may not appeal to all but it is a refreshing change from the standard icons we have come to see on other skins.

In the Lenovo IdeaPhone S890’s app menu, you have the option to list the apps either in the regular Android style grid or alphabetically. You can also jump to the recent and running apps from the menu as well.

The Lenovo IdeaPhone S890 doesn’t come with any noteworthy preloaded apps but you do have access to 5GB SugarSync straight out of the box, which is a nice touch.

Performance
Here’s a quick look at how the Lenovo IdeaPhone S890 compares against the Xolo X1000 and the Samsung Galaxy Grand.

From the benchmark scores, it is clear that the Lenovo IdeaPhone S890 isn’t the best performer in its price bracket in terms of benchmarks – in most tests, the Galaxy Grand Duos and the Xolo X1000 beat it.

The touchscreen response of the Lenovo IdeaPhone S890 is smooth. We didn’t face any hiccups in terms of navigating the device launching and using apps. The keyboard is laid-out well, and good to type on. It also offers you swipe to type, which is a nice addition.

The display on the Lenovo IdeaPhone S890 is 5-inches with a 960x540 pixel resolution. It has an IPS panel, which means that the viewing angles are good. The text, especially in books, is crisp and good to read. It’s a treat using the display. Even the colour representation of videos was nice.

The downside to the Lenovo IdeaPhone S890 is that it didn’t play the MKV or the MP4 HD videos we loaded on it. The MKV just stuttered and the MP4 only produced audio. This was via the native video player on the smartphone. SD AVI files however ran quite smoothly.

Browsing the Internet and reading e-books was a very good experience. The text was crisp around the edges and there was no pixilation and that is a very good thing. Reading books on the Google Books app was a treat.

The audio output from the speaker is nice. The apps sound loud and clear and audio didn’t distort even at full volume. For the videos, too the audio was clear but at full volume at the high octave moments, the audio did crackle.

Considering that the benchmark scores weren’t the best, the gaming performance of the Lenovo IdeaPhone S890 is quite good. Angry Birds Star Wars loaded quite fast. The performance of the game was quite smooth too. Dead Trigger also played quite smoothly on the smartphone. While playing the game, there were no apps running in the background. Even in the intense moments of the game, the smartphone performed well. The stutter and lag was minimal. Third party apps, such as news apps, social networking apps, etc., all ran well on the Lenovo IdeaPhone S890.

The rear of the Lenovo IdeaPhone S890 has an 8MP shooter. When the lighting conditions are good, you get decent looking images. View these images in their actual size and you will see there is a loss in detail. If there is text or something readable involved in the image, the details look hazy. The low light shots aren’t that great. Don’t expect the camera on this smartphone to replace your point and shoot, and is mostly useful for just clicking the occasional image when a camera is out of reach.

The Lenovo IdeaPhone S890 works as a phone as well. To start with, it shows off dual-SIM capabilities, which is nice, especially if you are someone who needs to be active on two numbers at the same time. The call quality from the smartphone is good. The audio from both the ends is clear and there is nothing specific one can complain about with the call quality.

In our continuous video playback test, the Lenovo IdeaPhone S890’s battery lasted for 6.5 hours, which is excellent. For this test we had the brightness and audio at their maximum levels along with the Wi-Fi on. The video was an SD AVI file running via the native video-playing app.

Bottom Line
For an MRP of Rs. 19,800, you have a large number of smartphones to choose from. If you are looking for a sturdy well-built smartphone with a good camera and don’t care much for apps, you can take a look at the Nokia Lumia 720. The smartphone however runs on Windows Phone 8.

You can also take a look at the Samsung Galaxy Grand Duos, which gives you TouchWiz and some of the other features found on premium Samsung devices. You also have the Xolo X1000, which is a very well-built smartphone. The camera of the X1000 isn’t the best and it runs on ICS but it is a great smartphone nonetheless.

The Lenovo IdeaPhone S890 brings two unique features to the table - a nice cover which works like a smart cover, and a UI that is funky and may appeal to some. It is your run-of-the-mill Android smartphone in terms of other features. It won’t run all the video formats but its multitasking capabilities are nice. You can consider this smartphone but there are better options available out there.