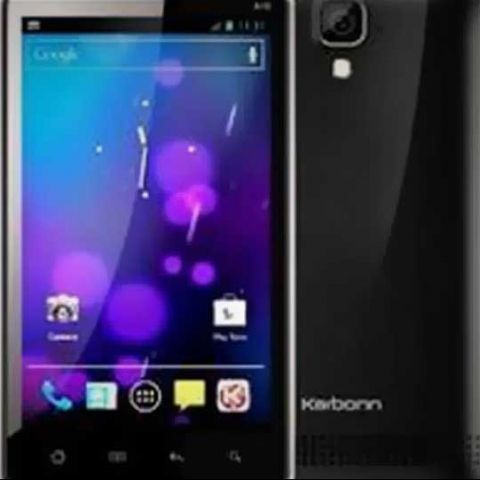 If you have a budget of Rs. 10,000 and are looking to buy a smartphone, pick up the Karbonn A18 with your eyes closed. It is a very good performer, stock Android ICS straight out of the box, great battery life and a decent camera too; not to mention the IPS display, though it does get scratched easily. The only down side, and we are nitpicking here, is the plastic nature of the rear panel.

Budget phones have always been plagued with a few issues that distinguish them from the mid range smartphones that offer a good hardware build and a decent smartphone OS experience. The budget phones that offer smartphone OSes usually suffer from underwhelming power under the hood resulting in a general lacklustre experience. Today we have with us a sub 10k budget phone that not only boasts of a 1GHz processor but also runs on Google Android 4.0 ICS straight out of the box. Is it a dream come true?

One look at the Karbonn A18 and the first thing that will come to mind is that it is quite big, heavy and well built to be a budget phone. We handed it to people who didn't know it was a budget smartphone and they were impressed with its build quality. It has a large 4.3-inch IPS LCD display, which is susceptible to a lot of fingerprints, and scratches that isn’t a nice thing.

Below the touchscreen, there are four touch sensitive buttons – home, menu, back and search. The left panel of the device has the volume rocker and the top houses the headphones jack, the on/off/sleep/wake button and the micro USB port. We are used to seeing the micro USB port at the bottom of the device and its placement on the top may be a little uncomfortable for some ergonomically. To us, it didn't really make much of a difference.

Of the four touch-sensitive buttons, long pressing the home button brings up the multitasking menu. The front of the device also houses the 1.3MP camera that can be used for video chatting and the rear has a 5MP camera with an LED flash.

The rear is glossy black plastic that is a fingerprint magnet from the word go. The rear panel is the only thing that feels a little flimsy especially when you remove it. Flip out the rear panel and apart from the battery you have space for the two SIM card slots and the microSD card slot.

The border of the device is silver in colour and has a matte finish. The smartphone’s overall build is very nice and it is comfortable to hold in one hand. The display is nice and easy to navigate even with one hand. This has to be one of the better-built budget phones that aren’t made by Nokia. It even surpasses the likes of the Spice Stellar MI 425 and the Micromax Superfone.

On the specifications front, the Karbonn A18 boasts of a 1GHz processor, 512MB of RAM, 2.55GB internal storage (503MB user available), expandable up to 32GB via a microSD card. The internal storage is a bit of a let down with the saving grace being the expandable memory.

The display on the device is a 4.3-inch IPS LCD capacitive touchscreen with a resolution of 480x800. The display is truly gorgeous considering the price point. It has an IPS panel and the viewing angles are surprisingly good. Whether you are reading text, watching videos or playing games and running apps, you will fall in love with the display. For a sub 10k phone the display is rich.

The device runs on Android OS 4.0 ICS straight out of the box. We have seen other budget smartphones like the Spice Mi 425 that will be upgradable to ICS but run on Android 2.3 Gingerbread.

One of the best things about the OS is that it is stock Android and there is no skin overlaying it, which means that there is no bloatware to slow it down. If you are one who isn’t a fan of the stock Android experience, then you can download a third party skin from the Google Play store.

The Karbonn A18 has 5 customizable home screens that you can load with apps and widgets. From the lock screen you can have quick access to the camera as well. Speaking of camera, there isn’t a dedicated shutter button and this is dearly missed.

The device does come with a few preloaded apps such as Kingsoft office, iBrowser and nexGTv. The preloaded apps aren’t anything spectacular and you can easily download them from the Play store.

Smooth is the first thing that comes to mind when you start using the device. The stock interface is flawless. Using it everyday we had no problems running games, apps, videos, cellular calling, social networking and more. It was as good as using a high-end smartphone running ICS.

In terms of its benchmark performance too, the device blew all the budget phones we’ve tested out the window.  You can take a look at the benchmark score comparison between the Karbonn A18, the Spice Stellar MI 425 and the HTC Desire C below:

As you can see from the above benchmark comparison, the Karbonn A 18 outperformed the competing smartphones in all the tests. The A18 has similar specifications when compared to the Spice Stellar but it still performed way better courtesy the OS and the lack of bloatware.

It is truly nice to see a budget phone perform this well on paper and in real world usage.

Now to the negatives. The first time we used the touch screen it was a bit rough and felt textured. It wasn't as smooth as we’d like. Using the device for some time we got used to it but the screen is easily scratchable. There was also a few times when the device glitched on us and the touchscreen wouldn't respond but this was fixed with a simple restart of the phone. We faced this problem 3 times during the testing of the device.

The 4.3-inch IPS display however performs well in terms of content consumption. The viewing angles are very good for watching videos and the colours look vibrant. Indoors, the brightness of the display was very good, but despite having an IPS display, the performance wasn't great in sunlight. The device is susceptible to glare but it is possible to make out content on the screen when the brightness is full. It is better than other phones in the same price range.

The rear of the Karbonn A18 has a 5MP camera whose performance is quite good in daylight. In the dark, the flash is there but its performance is lacklustre. The overall performance of the camera is almost as good as the original HTC desire. The one good thing is that it offers tap to focus and a number of shooting modes along with HDR. The shutter lag too is very low.

Thanks to the size of the device, the dialler is big with large numbers. The call quality from the speaker and the earpiece too is good. The phone is comfortable to hold for prolonged conversations.

The 1500 mAh battery on the phone will last for 2 days with some social networking, browsing, texting and making calls. You can throw a game or two into the mix too.  Overall, the performance of the phone is very good. It is safe to say that the Karbonn A18 is the best performing sub 10k ICS phone available today.

If you have a budget of Rs. 10,000 and are looking to buy a smartphone, pick up the Karbonn A18 with your eyes closed. It is a very good performer, stock Android ICS straight out of the box, great battery life and a decent camera too; not to mention the IPS display, though it does get scratched easily. The only down side, and we are nitpicking here, is the plastic nature of the rear panel.