It’s all about pricing with the Asus Zenfone 2. For a price-tag of 20k, this phone would be a really good buy. The performance is what you buy this phone for and irrespective of the flaws in the design, it's a minor mistep for an affordable flagship. There's a lot going for the Zenfone 2 and it would make for a good buy. It’s no ordinary Zenfone and while you do compromise a bit on the battery and a lot on the camera, Asus can justify that with the right pricing. If you’re looking for good performance in an affordable smartphone, then this will be one of the phones to go for. If you want a very good camera, then the OnePlus One and Xiaomi Mi4 should take precedence.

4GB RAM eh? Wow, that’s a lot of background app activity, something that is especially important for the resource hungry Android OS. Yes Google, you’ve done well, but iOS and Windows are both better at resource management than Android. But not all of us own iPhones and very few of us would go for a Windows-based smartphone right now.

All of this is why Asus has been pushing the 4GB RAM aspect of the Asus Zenfone 2. We’ve said it before and we’ll say it again though, one aspect doesn’t make a good smartphone. If it did, we wouldn’t have jobs. But I digress. The Zenfone 2 is not just about the 4GB RAM, it’s about Asus’ legacy, the Zenfone 5 in particular. The Taiwanese company made its name in the market with the Zenfone 5 and needed a fitting successor to that device. So, is the Zenfone 2 the one? Let’s find out. 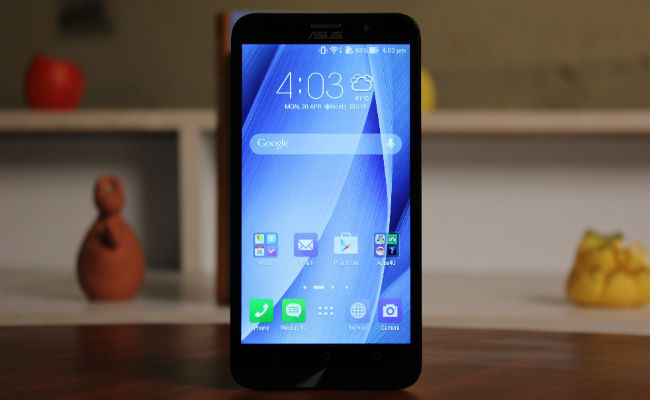 I’m not going to draw comparisons with the LG G3 and HTC One M8 here, because let’s face it, you can do that by yourself. Just look at the pictures below. 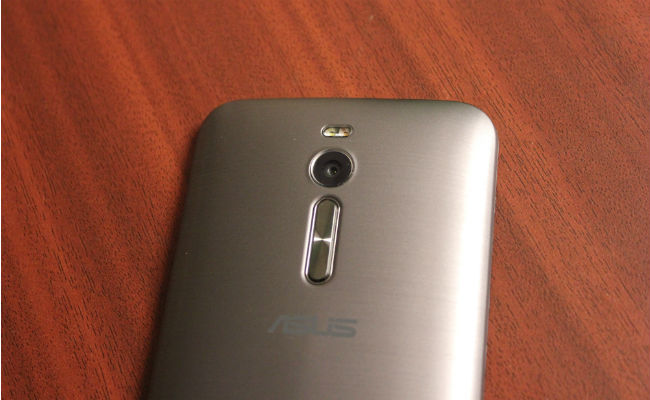 The Asus Zenfone 2 has about a 6 inch frame (not display) and the metallic finish does give it a premium feel. It’s not exactly balanced though, meaning the design isn’t seamless. Asus has retained some of the design elements from the Zenfone 5, which in my humble opinion, is a mistake. 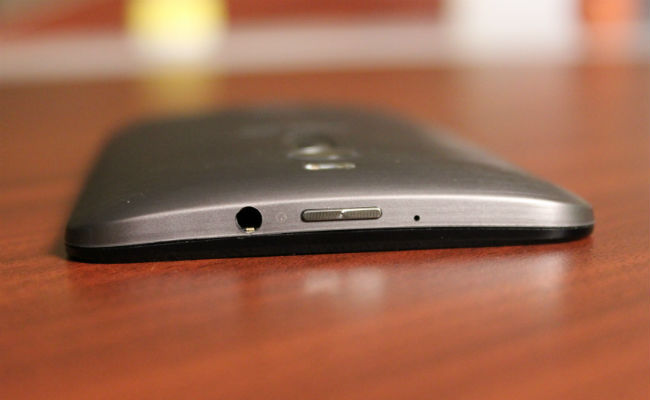 Of course, beauty is in the eyes of the beholder and the Zenfone 2 can look good in photos. My problem though is in the lack of seamlessness. The brushed metallic finish should have continued over the top and bottom bezels, with on-screen buttons, instead of physical ones. Of course, that would have drawn more comparisons to the LG G3, but that ship sailed with the rear volume buttons. 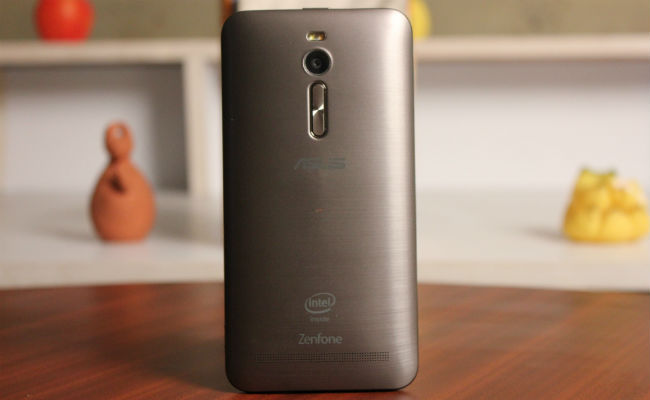 The black glossy plastic on the front doesn’t go with the back. It breaks the flow in a way and takes away from the really premium looks that the Zenfone 2 could have had. In fact, I suspect I would have ignored the bulk and weight of this device had the design been seamless.

If this was a high-end device, the design wouldn't have been good enough, but for an affordable flagship, the Zenfone 2 looks good. The combination of HTC and LG's design philosophies is passable for a smartphone in this price range.

At 5.5 inches, 1080p is the bare minimum, which is something that I’ve said before. The 403 ppi pixel density is very good and though the Zenfone 2’s display isn’t as good as the 2k display on a Galaxy Note 4, it is really good for the 20k price range. What makes it exceptional are the viewing angles. The Zenfone 2 has really wide viewing angles, which you will appreciate if you watch a lot of videos, especially if you do that with other people watching around you.

The display is a bit on the dimmer side, but not enough to really be a problem.

There’s a lot of talk about UIs nowadays, thanks in no small part to Samsung and its Touchwiz UI. The South Korean giant made its UI bloatware free, but someone seems to have forgotten to give Asus the notice. The Zenfone 2 comes with 28 pre-loaded apps, many of which you absolutely do not need. 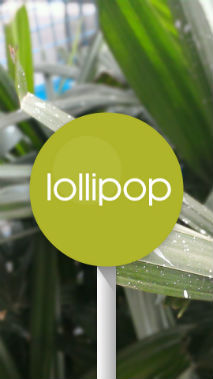 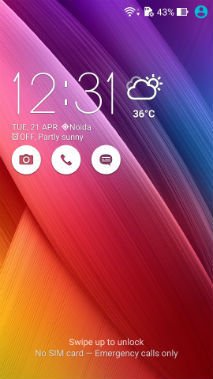 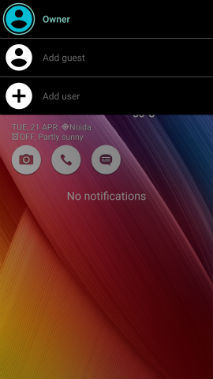 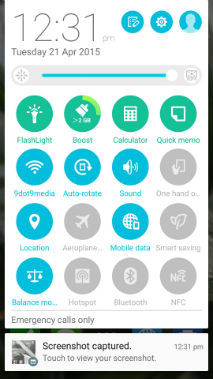 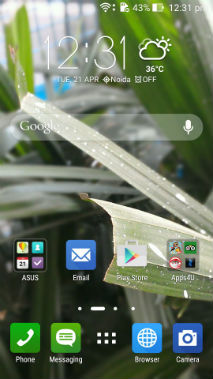 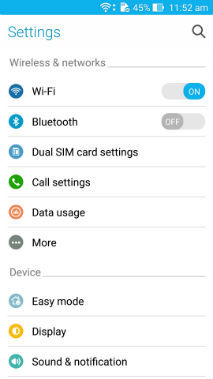 Asus’ ZenUI has its moments, like the facts that folders on the home screen name themselves based on the apps you’re putting in them. There are also the bright wallpapers and icons, which many may like.

Overall though, Zen UI isn’t the best UI out there. It needs to be simpler and less gimmicky.

This is where the Zenfone 2 makes all its money. The Intel Atom Z3580 quad-core SoC combined with 4GB of RAM is a formidable pair. The simplest way to define the performance would be something squarely between the Snapdragon 800 and Snapdragon 801 from Qualcomm.

It puts up a fight in benchmarks and the difference is barely visible during regular use. What’s even more heartening is the PowerVR G6430 GPU. This is the same GPU that Apple used along with its A7 SoC in the iPhone 5S. The performance is somewhat similar to the Adreno 330, which is fitted in the OnePlus One and Xiaomi Mi4.

We’ve already compared the Zenfone 2 to those two device and you can read that here.

The Intel processor does have a pitfall, in the fact that it isn’t as battery efficient as its compatriots. Don’t go drawing conclusions on that before you read the battery segment of this review though.

The overall performance of the system is aided by the 4GB RAM. Hard as I tried, I couldn’t get the Zenfone 2 to drop below 900MB of free RAM. That’s saying something, since even 3GB devices sometimes find it tough to deal with the number of games I play on my phone.

People often mistake the size of a battery with how long it lasts. Asus may have put a 3,000 mAh battery in the Zenfone 2, but it doesn’t mean it will last long enough. The battery efficiency of a phone depends on the efficiency of the entire system, the interaction between hardware and software and also the hardware’s own efficiency.

While Intel seems to have done better than before here, I’m sure many will still complain about the Zenfone 2's battery, as they did with the Zenfone 5. We took your take on the Zenfone 5 and the battery was the most common concern.

I’m not saying the Zenfone 2 has bad battery life, but it doesn’t match up to the OnePlus One. As we wrote in the comparison before, it’s better than the Xiaomi Mi4, but not as good as the OnePlus device.

During regular use, with some light gaming, and lots of emails and texts, the phone lasted me for about 10 hours. On an average, the Zenfone 2 lasted for about 8 hours each day before I needed to charge it. Using the battery saver modes, I could increase this to 10 hours, but that’s about the best I got.

Even in our own battery tests, the Zenfone 2 lasted for about 7 hours, which is better than the Zenfone 5, but not enough to last you through the day. It’s an ok battery at best.

If the Zenfone 5’s weakness was in the battery, the Zenfone 2 fails in the camera department. It’s not the worst camera in the market, but it’s nowhere close to the best. The camera on this phone lacks details and struggles to focus when light conditions are uneven. In bright sunlight, we got images that were massively oversaturated and under fluorescents lights, they were often blown out.

With an expected price tag of 20k, this isn’t the camera one wants. This camera doesn’t compare to the Mi4 and the OnePlus One and has absolutely no chance against the Honor 6 Plus.

The low light shots were more respectable than the rest and Asus’ low light mode makes things even better, but that’s about the only good thing about the 13MP rear camera on the Zenfone 2.

It’s all about pricing with the Zenfone 2. For a price-tag of 20k, this phone would be a really good buy. The performance is what you buy this phone for and irrespective of the flaws in the design, it's a minor mistep for an affordable flagship. There's a lot going for the Zenfone 2 and it would make for a good buy.

It’s no ordinary Zenfone and while you do compromise a bit on the battery and a lot on the camera, Asus can justify that with the right pricing. If you’re looking for good performance in an affordable smartphone, then this will be one of the phones to go for. If you want a very good camera, then the OnePlus One and Xiaomi Mi4 should take precedence.