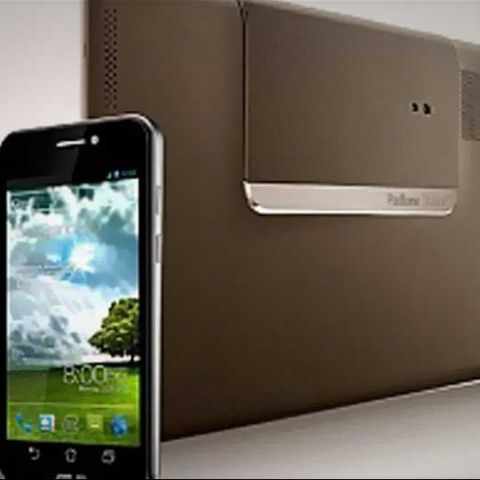 As a concept the PadFone works well. It tries to bring the best of three worlds in one device, but at what cost? Rs. 65,000 is a little expensive. We like the idea of using the pen as the phonem but there is no place in the tablet or the keyboard dock to house it, giving it a lifespan of two days. If you are in the market to pick up a smartphone, you can get the iPhone 5 in this budget, or an iPad and a decent Android smartphone. It is not exactly a value-for-money product. But if you are the kind of person who wants one gadget to fulfil your smartphone, tablet and netbook needs, you can consider picking this device up however. If that is the case, we would recommend waiting for the PadFone 2.

Is it a phone? Is it a tablet? Is it a laptop? Well, it's a three-in-one. Yes, today we live in a world where one smart device doesn't suffice our needs. We need a smartphone for certain tasks, we need a tablet for other things and nothing beats the utility of a physical keyboard for typing.

But what if we had one device that could work as all three? We have seen tablets that come with keyboard docks that give them the utility of a netbook, but nothing that incorporates a smartphone into the mix.
Today we have with us the Asus PadFone. It is smartphone that comes with a docking station making it a tablet that also comes with a keyboard dock that should give it the utility of a netbook. Is this truly a three-in-one device, or are you better off getting three different products?

Design and Build
First, the phone part of the Asus PadFone itself – the build is very nice, and has a very premium feel to it. The rear has a textured, rippled plastic finish to it, similar to what we have seen on the Asus Zenbook ultrabook and the Transformer Prime tablet. The smartphone has a teardrop design which makes it nice to hold in one hand. The side of the phone has this aluminium bezel making it feel premium. 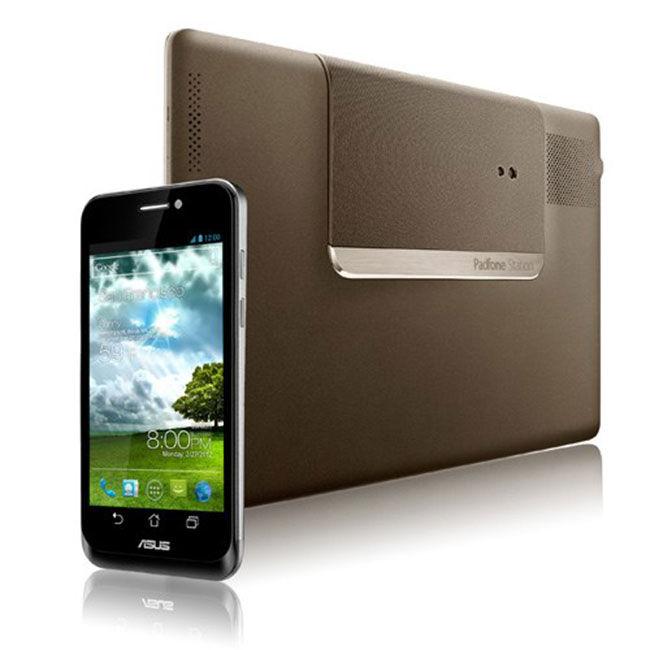 The front of the device has the 4.3-inch super AMOLED display. The rear houses the 8MP camera with the LED flash. The top has the on/off/sleep/wake switch along with the headphones jack and the right has the volume rocker. There is no dedicated camera button and this is missed on the smartphone. The left has the microUSB port for charging and another port that connects the smartphone to the tablet dock.

As mentioned earlier, the Asus PadFone has a teardrop design but this design element isn’t as evident as it is on the Samsung Galaxy Nexus. It makes the smartphone very comfortable to hold and its size is great for use with both as well as single hand use.

Moving to the design of the Asus PadFone’s tablet dock, we see it has a 10.1-inch display, clear black borders and the VGA camera for video chatting. The left and right side of the screen have what appears to be speaker grills but that isn’t the case. A single speaker rests at the rear of the device and these grills are more of a design element and have as little utility as adding to the grip.

The left of the Asus PadFone’s tablet dock has the headphones jack and the volume rocker, while the bottom has the charging port as well as ports that fix it in the keyboard dock. The top has the on/off/sleep/wake switch along with a slider that releases the panel where the phone can be inserted. This pocket, where the phone can be inserted, sticks out a bit from the rear of the tablet. It isn’t a bad design choice; it’s just that it's a prominent bulge. This pocket too has the same textured finish found at the back of the phone. The hinge of this pocket seems sturdy and well constructed. Inserting the phone is simple, as all you have to do is align the ports, insert the phone and you’re done. 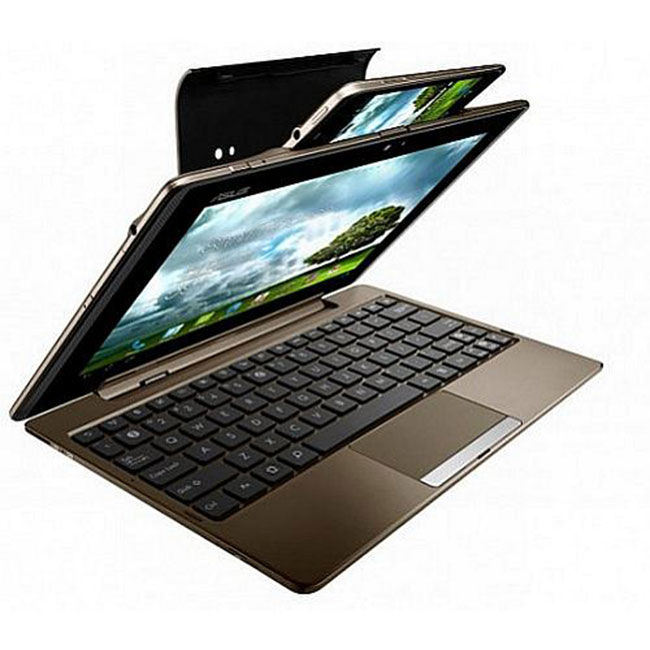 Coming to the final accessory, the Asus PadFone’s keyboard dock – put simply, it is the same one that is found on the Asus Transformer Prime. The right of the dock has the SD card slot and a full sized USB port. The left has one more full sized USB port, charger connector and a battery indicator. The keys on the keyboard are well laid out and even though the keys do feels a bit small, there is enough spacing between them to feel comfortable during typing.

Features and Specifications
The PadFone (smartphone) has a dual-core 1.5GHz Krait CPU with the Adreno 225 GPU, coupled with 1GB of RAM. The 4.3-inch AMOLED display has a 540 x 960 pixel (qHD) resolution. Not a Retina Display, but quite impressive nonetheless.

It comes with 16/32/64GB built-in storage options, expandable up to 32GB via a microSD card. It is powered by a 1520mAh battery. That's the specifications of the phone. The tablet dock has no processing power driving it. It is just a 10.1-inch representation of the content and the power that drives the phone. The 10.1-inch display has a resolution of 1280x800, which is nice, and the whole dock is powered by a 6600mAh battery. It is on the heavier side weighing 724 grams and may be a little difficult to handle with one hand use.

The Asus PadFone runs on Android 4.0.3 Ice Cream Sandwich straight out of the box, an OS optimised for use on both a smartphone and tablet. The OS is skinned so it isn’t a stock Android experience but the customization isn’t as deep as let us say, the Sense UI from HTC, or the TouchWiz UI from Samsung. It’s much lighter in comparison. You do have some nifty widgets like the power widget, task manager widget and the weather widget that add a bit of variety to the device and you also have the slew of other standard Android widgets to customize the home screen. 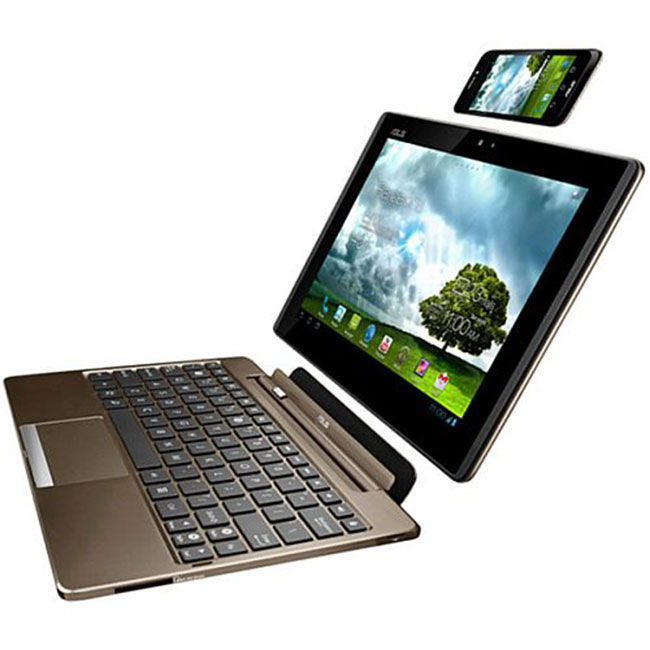 The swipe down notifications menu on the Asus PadFone gives you access to the standard slew of settings with one nifty addition – adjusting the brightness. Sure, we have seen this implemented in TouchWiz, but there is something called as outdoor mode, which makes the display a lot more vibrant and more comfortable to use under direct sunlight. The same is available on the tablet as well and it is one feature we truly appreciate.

Since the Asus PadFone functions as a smartphone and a tablet, there is a separate section on the device called Pad Only. This is the place where the tablet specific apps are housed. Another nifty feature is the addition of full USB support from the keyboard dock, making data access on the tablet easy.

You also get a stylus with the tablet. Even though it doesn't have the same diverse functionality as the S-Pen that comes with the Samsung Galaxy Note, Note II or the Note 800, but it does have one very unique functionality – it doubles up as an earpiece and mic for your tablet. Say you have docked the tablet, and are typing a document sitting in a café. You aren’t going to receive a call on the tablet via the loud speaker. It is plain embarrassing. The pen however gives you the ability to have a private conversation, just as you would on a phone. Although using a pen like device in public will make you look like a fool, it may make you feel like James Bond at the same time.

Performance
The performance of the Asus PadFone as a smartphone is really good with one drawback – the onscreen keyboard. The keyboard on the smartphone doesn't have the best layout and even though the touchscreen responds to a feather touch, the keyboard doesn't. Sometimes you have to make an effort to type and that isn’t a good thing.

In its raw performance, the Asus PadFone performed quite well. Its performance was a bit less when compared to the quad-core behemoths flooding the market but it wasn't too far away. In the dual-core race however, the device performed quite well. To put things into perspective, below is a benchmark comparison between the Asus PadFone, LG Optimus 4X HD, Sony Xperia Ion and the Samsung Galaxy S III.

In real world usage the Asus PadFone perfomed quite well. The call quality from the phone is excellent. It is crisp at both ends and sounded quite good even in crowded scenarios. The loud speaker on the tablet is good as well, producing clear and audible sound. What surprised us was the call quality from the pen. It was crisper than some of the phones we have tested, and that is a very good thing.

The video playback on both the Asus PadFone smartphone and the tablet was really good. The representation of colour was crisp and nice although the black levels were a bit lower than we’d like. Even in fast action sequences, there was less blur and loss of pixels making this device quite good for watching videos.

Android’s app market (the Google Play store) doesn't have too many tablet specific apps but the ones that are there run nicely on the Asus PadFone tablet dock’s 10.1-inch display. It’s particularly fun to play games on the screen of the tablet. 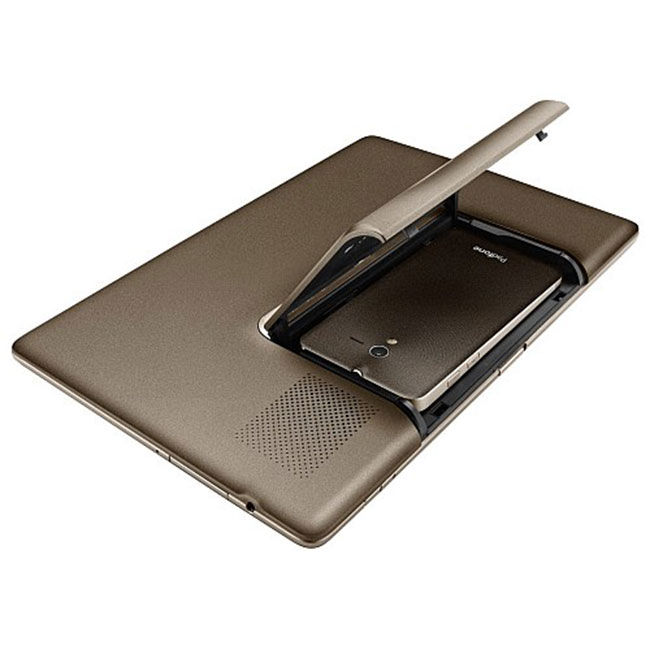 The battery life on the Asus PadFone is its best feature. Asus claims that combining all three – the phone, tablet and keyboard dock the device will last for 105 hours. The phone itself will last for one and a half days of average use, and that is very impressive.

Bottom Line
As a concept the PadFone works well. It tries to bring the best of three worlds in one device, but at what cost? Rs. 65,000 is a little expensive. We like the idea of using the pen as the phonem but there is no place in the tablet or the keyboard dock to house it, giving it a lifespan of two days. If you are in the market to pick up a smartphone, you can get the iPhone 5 in this budget, or an iPad and a decent Android smartphone. It is not exactly a value-for-money product. But if you are the kind of person who wants one gadget to fulfil your smartphone, tablet and netbook needs, you can consider picking this device up however. If that is the case, we would recommend waiting for the PadFone 2.