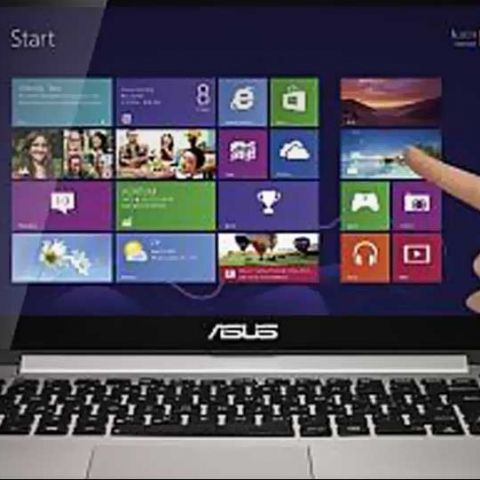 Like its bigger screen sibling, the more affordable S400CA walks the same path of very good build quality and fairly good performance. The touchscreen has added a bit of bulk to the entire package, which does take away from the actual ultrabook experience. But, it is still lighter than a notebook!

Close on the heels of the S550C ultrabook, Asus had another ace up its sleeve – the S400CA. The major difference between the two is the screen size – S550C's 15-inches compared to the S400CA’s more compact 14-inches.

Build & Design: Sharp & Bright
Build quality is un-bloated and remains fairly understated and minimalistic. However, like most other ultrabooks, the Asus Vivobook S400CA has also gained weight over a period of time. The direct blame for this sits on the addition of the touchscreen apparently, at least that is what we are mostly told. However, Sony’s implementation of the touchscreen in the latest VAIO Pro 13 is proof that even the slimmest and lightest machines can pack in touch.

On the positive side, the Asus Vivobook S400CA’s aluminum chassis is one of the best in the class, and the sharp design is sophisticated. The sharpness is accentuated by the fact that the thickness that gives the illusion that it is thinner on the near side, and thicker near the display.

The dual-colour theme of black and silver on the Asus Vivobook S400CA is a good contrast. The lid gets the dark colour finish, while the keyboard deck has the silver colour, and the touchpad gets a slightly brighter tone of the same colour. There is a lot of space for the palm-rest area around the touchpad.

All in all, the Asus Vivobook S400CA is a rather well-built ultrabook, which is something that gains greater value considering the price tag. Yes, the touchscreen is something that you may be able to do without, in which case the added bulk does offer a slight annoyance.

Power Package: Better Than the Rest
The Asus Vivobook S400CA is powered by an Intel Core i7-3517U processor clocking at 1.9GHz, with Turbo Boost taking it up to 2.4GHz. Asus has loaded this machine with 4GB of RAM. True ultrabook specifications are evident, with the 500GB hard drive and a 24GB flash storage for caching tasks. Within the generally slim form factor, Asus has packed in 3 USB ports, a memory card reader and an HDMI out. The machine comes loaded with the 64-bit version of Windows 8.

Display: Crisp, but Lacks in Media Playback Experience
The 14-inch display of the Asus Vivobook S400CA has the 1366 x 768 pixel resolution now standard on most ultrabooks in this price bracket. While that is acceptable, we would ideally have preferred a display with a higher resolution, considering these machines will be used to view HD content in good quantities. That is a request we have, quite honestly, but not one for which we see any progress anytime soon. Most laptop makers are just happy with the 1366 x 768 pixel displays on their machines, even though in many cases, the same machines selling abroad may offer 1080p versions.

This particular screen on the Asus Vivobook S400CA ultrabook is quite crisp, and text rendering is very good. Icons look sharp, and colour is handled very well. Up to 50% brightness levels, the black levels are quite deep and make the other colours look better. However bump it up to around 70% - 80%, and the blacks become lighter and the contrast takes a bit of a beating.

However, the best thing about the Asus Vivobook S400CA’s display is that it isn’t as reflective as what some of the rivals offer, and that is a huge bonus in terms of comfort.

This brings us to the point of the touchscreen. The Asus Vivobook S400CA’s touchscreen works well, and the touch response is precise. However, do we really need one? Well, it is good to have the extra feature to enjoy the Windows 8 UI, but we don’t see a usage scenario much beyond that. I mean, you will not use the touchscreen to scroll through web pages, just because the touchscreen is present. Habit dictates we use the touchpad and the two finger scroll, and that is what you will inevitably always do.

Performance: Impressive
Performance is very good, but you do need to get rid of a whole bunch of preloaded utilities to get the actual performance experience. Because of the flash storage, the Asus Vivobook S400CA boots quite quickly into Windows, and also makes the apps open quickly. With the Core i7 processor, the machine has enough grunt to handle considerable multi-tasking load. However, for a machine with a processor this powerful, just 4GB of RAM is actually a slightly perplexing combination, and we would have expected 8GB as the ideal amount to make this the true multi-tasking beast. Gaming isn’t this ultrabook’s forte, since there is just the HD 4000 graphics installed.

Battery life of the Asus Vivobook S400CA, in a typical day at work usage, would be around 5 hours, and the battery test pegged this at around 200 minutes. This is a fairly good score for an ultrabook packing in so much power, and would get you through half a day at work with ease. Maybe even a bit more, if you are considerate with the screen brightness level.

Keyboard: Still the Second Best
Asus keyboards have improved considerably over time, and it is quite a superhuman effort considering how well they designed the keyboard on something as small as the 11.6-inch VivoBook. With the space of a 14-inch display, the layout of the Asus Vivobook S400CA is very good. Spacing is very close to perfect, and the good amount of palm-rest area aids with typing. However, travel still needs some work, and that is where the HP ultrabooks have the advantage of a better keyboard, which is more conducive for quicker and eventually more precise typing.

Buy or Not Buy: A Very Good Ultrabook
All in all, the Asus Vivobook S400CA-CA028H is an ultrabook that you must consider, for the excellent build and the good performance. However, if you want something with a dedicated graphics card and a touchscreen isn’t an important criteria for you, then the HP ENVY 4 could be an option to consider.