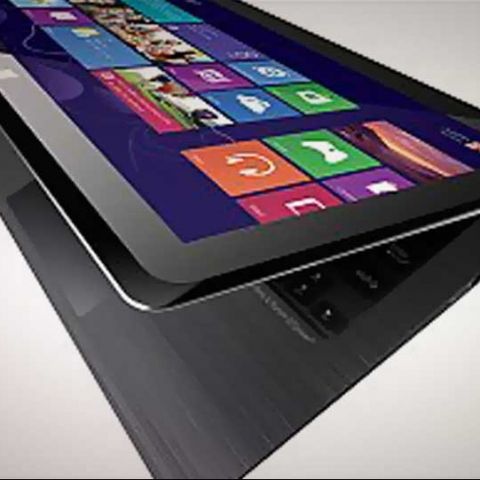 As an ultrabook, the Asus Taichi does offer a rather unique package. It does well on both the build quality as well as the performance front. But we don't really think the secondary display makes a lot of sense at this time, unless you want to show off often. You should essentially consider the Taichi 31 for the Full HD display, and the very good keyboard. If you aren't excited by either of those aspects, then you can consider a lot of other ultrabooks that cost half as much.

The Asus Taichi 31-DH71 is clearly an ultrabook that is meant to be the standout device in the entire category. It is almost nothing like the traditional ultrabook we have come to know and love. It has not one display, but two. While this machine does have the pull factor, potential customers do need to keep in mind that the Asus Taichi 31-DH71 is not meant for rough use, particularly when taking into account the display where the traditional lid is supposed to be.

Build & Design
The brushed aluminium unibody of the Asus Taichi 31-DH71 lends it a premium look and feel, something that is matched only by the Samsung Series 9 ultrabook. The fact that this is a unibody essentially means that the battery pack is locked away, if you are looking for the negatives. But the positives include the fact that the machine doesn’t have any rough edges build-wise and there will be no flex on the usual suspect places – middle of the keyboard, the palm-rest or the underside. The keyboard deck and the underside are very well put together, which is an extension of the advantage of the unibody. While most of the chassis can handle a bit of roughness, the finish still will not be able to handle major roughness.

However, the same doesn’t follow through completely for the Asus Taichi 31-DH71’s lid, which has a tad too much glass because of the two displays. You cannot mishandle the machine one bit, or carelessly keep something on the lid, because of the secondary display. The hinge is quite taut, but you cannot risk applying too much pressure anywhere on the lid, because again, the display isn’t something you want to risk messing around with.

The port placement of the Asus Taichi 31-DH71 is on the sides. The left side spine has one USB port and the memory card reader, while the other spine has another USB port, a Mini HDMI and Display port as well as the “slide to power on” power key.

Features & Performance
Dual Display: The dual display thing is quite neat. Once you have the Asus Utilities set up, you can set the display mode to ‘either’ or ‘both’ the 13.3-inch screens. The actual use case scenarios for using both or the second display will be very limited, unless you really use this in the so-called tablet mode. Essentially, in this mode, you close the machine like you would on a traditional laptop or ultrabook, and that is when the second display becomes active. We aren’t really sure if a machine this heavy can be considered a tablet in any use case scenario! But then again, the Taichi 31 was never meant to be one anyway.

The primary display of the Asus Taichi 31-DH71 isn’t a touchscreen, but the one that sits in place of the lid is! There is the Taichi Stylus as well, for use with certain apps, to bring the handwriting experience. The Full HD resolution on the primary does make the text a tad too small in default Windows mode, but setting it to 125% makes it comfortable for use. It has very crisp handling of the text, making readability easier. HD videos look very good, and fast motion scenes are handled very smoothly. It is only slightly reflective, which makes it comfortable for use in most workplaces. But we must say that the Full HD resolution is a very welcome addition to the package.

The secondary display is very reflective, and that is something that can be uncomfortable in most usage scenarios. The touchscreen works well, but the glass does catch fingerprints very easily. Once you get beyond that, the display quality impresses. The colour looks better than the primary display, but that can be attributed to the visual impact of the reflective layer over the screen. Text is rendered very well.

Keyboard: Asus has mastered the art of packing in excellent keyboards in small spaces, like with the VivoBook. The one on the Taichi 31-DH71 is well spaced out with adequate travel allowing for quick typing. Key size is quite big, with adequate spacing. While the machine is quite slim, the individual key travel hasn’t been compromised at all. While this isn’t quite as good as the latest generation keyboards that HP is using with the TouchSmart 4 ultrabook, it still pretty much gets the job done.

Real World usage: The machine (Taichi 31-DH71) that we got for review has an Intel Core i7 3517U processor, clocking at 1.9GHz, and is paired with 4GB of RAM. The machine packs in a 256GB SSD. Performance from the Core i7 processor is quite good, starting with the machine booting up quickly. Apps open quickly and multitasking doesn’t slow down the machine too much. The problem is that Asus has preloaded a bunch of software on the machine, and that only ends up bogging down the performance. The ideal scenario would be to remove all unnecessary preloaded stuff and clean up the start items list.

In our stressful battery tests, the Asus Taichi 31-DH71 lasted 157 minutes on a single charge. To make it simpler to understand, the battery will last 4.5 hours with ease on a day at work, with the brightness set at 60%.

Bottom Line
As an ultrabook, the Asus Taichi 31-DH71 does offer a rather unique package. It does well on both the build quality as well as the performance front. But we don’t really think the secondary display makes a lot of sense at this time, unless you want to show off often. You should essentially consider the Taichi 31-DH71 for the Full HD display, and the very good keyboard. If you aren’t excited by either of those aspects, then you can consider a lot of other ultrabooks that cost half as much.