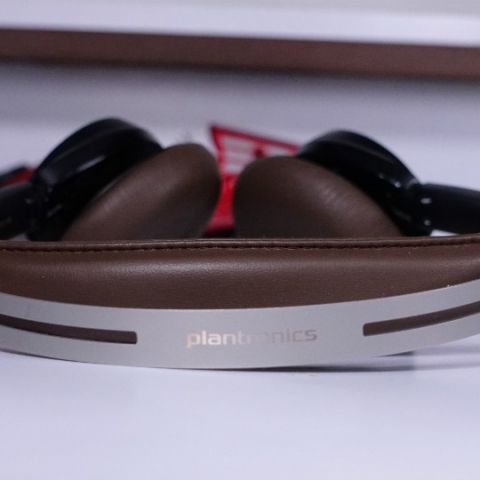 At Rs. 8,390, the Plantronics BackBeat Sense makes for an excellent pair of headphones – light, durable build, extensive connectivity range, very good audio quality and strong battery stamina. The intuitive play/pause feature is an added response, and ergonomics are excellent. The only major con is its wired audio performance, which is low. However, for its price point, it is very highly recommendable, both for the audiophile and the music lover.

INTRODUCTION
The Plantronics BackBeat Sense, beginning with the packaging, has been designed keeping in mind a premium audience. On a premium note, pricing is affordable, and right from the inner etch on the hard box that says, ‘Designed in San Jose, California’, the intent is clear. Snugly fit into the box is a grey fabric travel pouch which, unfortunately, is not exactly small, and is somewhat large in comparison to what the pair of headphones are. Nevertheless, you get a separate compartment to store the main unit, and another one that keeps the connector and the USB cable.

BUILD and DESIGN
With the BackBeat Sense, Plantronics has take a bare-bone design to complement the smoothly built earpads. Aspects where the BackBeat Sense ace include the use of matte metal in headband, light build to keep it reasonably comfortable, and easily accessible wireless controls (placed on both the ear pads), making it an ergonomically efficient unit. The build quality is good, without making it heavy. Coupled with the fact that this is a supra-aural headphone, the BackBeat Sense is reasonably comfortable, although the air thrust does seem a tad bit heavy (read the audio performance section). In terms of design, the Plantronics BackBeat Sense keeps it minimal, and focuses mainly on ease of usage.

If you do not prefer wirelessly connecting your headphones, or if the headphone’s battery runs out, the in-box connecting wire will do the job. It is a tangle-free, dual-3.5mm connecting wire with in-line control for receiving calls, and playing/pausing audio. The wire is long enough, and connecting is not an issue. However, quality of audio degrades on wired connection – more on that later. 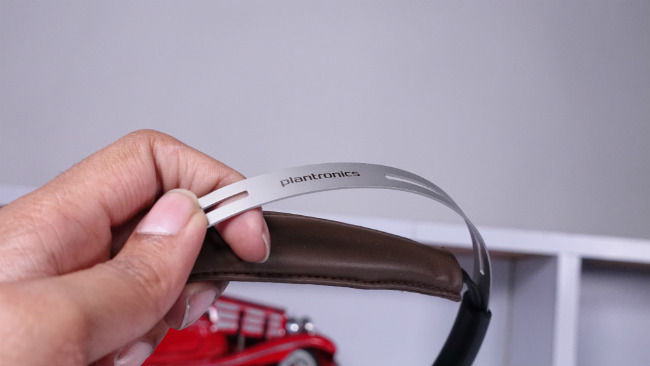 The headband is sturdy, but build remains light 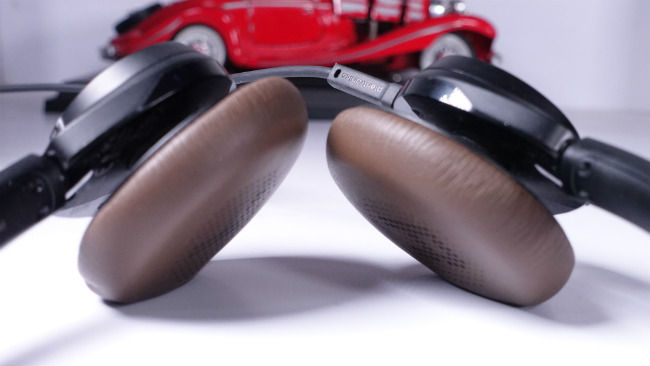 The earpads look premium, but are not the most comfortable 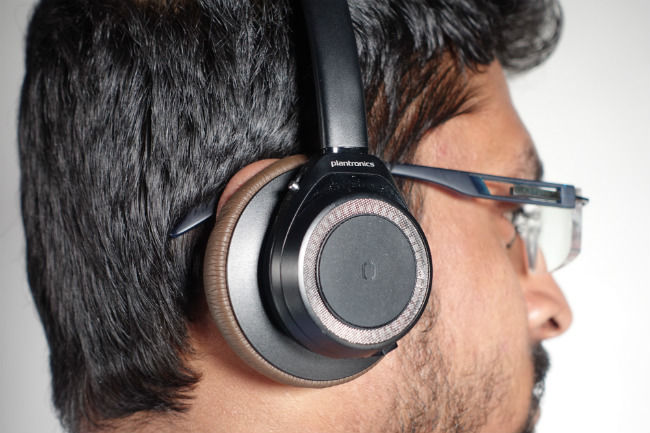 Ergonomics are excellent, and the earpads fit perfectly in place

The BackBeat Sense is well designed, and does feel like a premium segment headphone – with the brushed metal headband and decent quality faux-leather used on the earpads. The only qualm here is the quality of plastic used, which feels somewhat tacky. This is possibly the only mishap in an otherwise finely-crafted pair of headphones. The left earpad has pause/play, rewind and fast forward buttons, while the right earpad has the volume toggle, Bluetooth on/off toggle and receive/end call button. You can twist the earpads to make them lie flat, which is an added benefit. The entire setup is compact and ergonomic, and all operational features are easy to access on the go. The headband is sturdy, and keeps the pair of headphones firmly in place.

The Plantronics BackBeat Sense is lightweight, and does not make long hours of listening too hard. What it misses is active noise cancellation, which, for its price, is expected. It scores high in terms of build quality and design elements, and raises the expectations for the entire experience.

CONNECTIVITY and BATTERY LIFE
On its official specifications, Plantronics lists Bluetooth capabilities of the BackBeat Sense as simultaneous connection with two devices, and connectivity range of 330 feet (100 metres). While this is in an ideal condition, the BackBeat Sense still does very well in real life condition. Particularly in the crowded office space of ours, or at my house with a vast terrace, the BackBeat Sense retains connection with a device till about 70 feet, which is quite good. From about 50 feet distance without any obstacle, the signal begins dropping. Within a maze of furniture, you will still get uninterrupted audio till about 40-45 feet, which is quite good, despite being a mere one-sixth of the advertised range.

The audio fidelity over Bluetooth is excellent, and is in fact one of the best that I have heard, lately. The BackBeat Sense delivers superlative audio quality over Bluetooth, than over wired input, reiterating its focus as a wireless headphone. Among the neat, intuitive touches that Plantronics has added to the BackBeat Sense, are the uber-responsive buttons, and the intuitive sensor unit that pauses a playing song if you take the headphones off your ears. A programmed voice informs you of the battery and connectivity status of the BackBeat Sense. Right off charging and connecting to my primary audio driver, my trusted iPhone 5s, I would be welcomed by the voice on the BackBeat Sense, stating “Battery High, Phone 1 connected”. The responsive pause feature is an excellent addition. For instance, if you’re commuting via public transport, and happen to be on the lookout for the austere announcer on Delhi Metro, you can take off the pair of headphones for a few seconds, and the song that you were playing would pause by itself. Soon as you put it back on, the song is resumed. Neat. 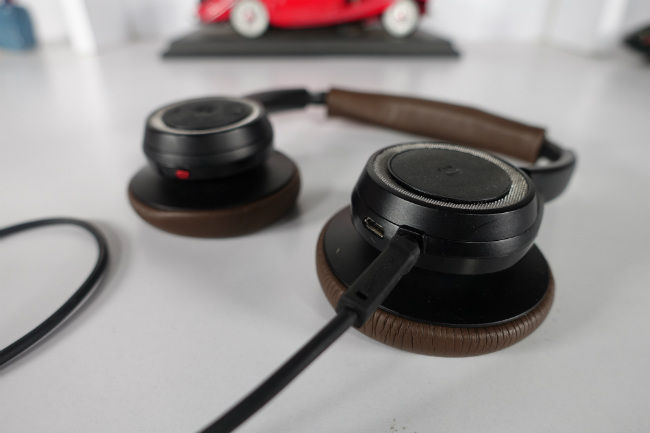 The BackBeat Sense's wired connection is not mobile-optimised 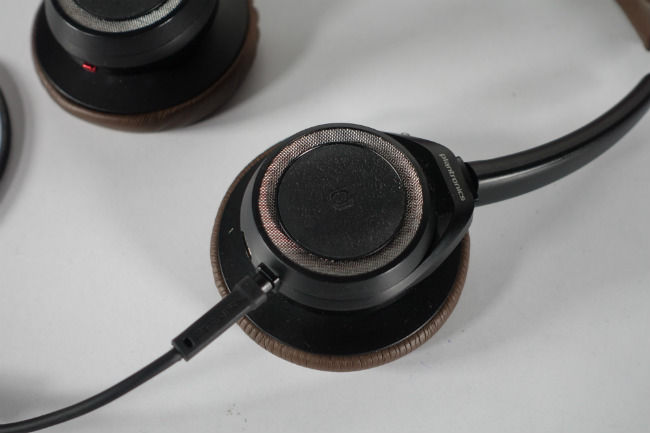 One full charge will last you for about 16 hours

However, this feature is not constant throughout an entire charge cycle of the BackBeat Sense. When battery level reaches low, song pauses become inconsistent, and even when the music does pause, you will have to resume it manually. There is a Bluetooth on/off toggle, and you can switch off Bluetooth when you’re not listening to music, to save on battery life. The addition of the 3.5mm cable is a good thing – if you run out of power on the headphones with a long way to go, you can simply plug the cable in, and keep listening. You will suddenly notice a stark drop in audio volume and fidelity when you switch to wired connection, and this may be due to the low power delivery that happens for some reason, which I shall talk about in the following section. It is still a viable section, nonetheless.

The battery life of the BackBeat Sense is very good – if you’re careful and switch the headphones off whenever you’re not using it, you’ll be able to squeeze out nearly 16 hours of audio, which is quite admirable. Being somewhat careless about conserving power, my average usage from one full charge cycle was a bit more than 14 hours. A single LED indicator blinks red once the charge hits the lower levels, and blue, when you charge it, or attempt to connect it to a device. Battery stamina is advertised as 18 hours of continuous usage, and 21 days of standby, and I myself could juice out nearly 18 days, which is equally good.

To sum up, the connection and battery strengths of the Plantronics BackBeat Sense is excellent, and is downright impressive, considering the audio quality that it delivers.

AUDIO PERFORMANCE
This is the most impressive bit about the Plantronics BackBeat Sense – the audio quality it has on offer, when connected wirelessly. The audio is powerful, and at optimum volume levels, the audio is remarkably clean. In spite of no active noise cancellation and the supra-aural build, the BackBeat Sense manages very good noise attenuation, to the extent that at medium volume level, you will not get to hear anything of what’s happening around you, and that is really impressive.

In terms of specifications, the frequency response covers the entirety of the audible range. In real life, sound performance is commendable, and although the mid frequencies may sound somewhat flat at 60-75% volume, there is no real ‘flaw’ in its audio delivery, otherwise. To add perspective, Skrillex’s Cinema and Kyoto hits the highs as sharply as the precise bass wobbles. If you’re a fan of rock, particularly Classic Rock (read: Pink Floyd), you will be pleased with how true Gilmour’s guitar solos sound on the BackBeat Sense. There is an accentuated sense of warmth that the BackBeat Sense delivers, and the timbre is distinct, to the extent where you will clearly be able to distinguish the guitar solos of John Petrucci and Steve Vai in the G3 concert in Tokyo, when they play Foxy Lady. Particularly enticing is to listen to Jimi Hendrix, for the sheer warmth of the Stratocaster.

"There is an accentuated sense of warmth that the BackBeat Sense delivers..."

The bass response is powerful, yet not overpowering over the entire track, laying the backbone of compact audio delivery. The mids are smooth and prominent, and at the highest volume level, sound bright and crisp, although marginally subdued. The highs are crisp, and are not too shrill, therefore not hurting your ears. Soundstaging, however, is one issue that may have been better. While the overall soundstage is decent (even good, considering its supra-aural build), the airflow between the dynamic audio drivers and the ears is too low to create a wholesome experience, and you’re ever-so-slightly left with a sense of longing, particularly you’re watching audio-intensive content like Interstellar, Requiem for a Dream, and In the Mood for Love. Reasonably small price to pay? I’d like to say so, but for a pair of headphones this impressive, you tend to look for what goes amiss, and this is one such aspect. One of the best aspects of the Plantronics BackBeat Sense is that it does not make the audio fall sharp on your ears – the smooth output is a beautiful auditory experience, and the discomfort lies only in its build.

Switching to wired audio, and the fall in audio volume is drastic. For mobile-oriented headphones, this is a major flaw, as most would use the BackBeat Sense for cellphone/portable media player music playback. While for other headphones connecting with a cable, this may have been due to high impedance, such is improbable here as the BackBeat Sense is primarily a wireless headphone. Nevertheless, you would rather stick to wireless audio, where it pumps out audio with ample power and clarity.

Notwithstanding this, the Plantronics BackBeat Sense provides excellent audio quality, although the bass is marginally more pronounced than the high frequencies. But, the overall audio output is reasonably balanced, and coupled with the extensive range, decent battery life and the price point, has thoroughly impressed me.

BOTTOMLINE
The Plantronics BackBeat Sense is possibly one of the best pair of wireless headset out in the market – light, durable build, ergonomic placement of extensive controls, ample connectivity range, good battery life, and clear, distinct and balanced audio quality. Add to that a price point of Rs. 8,490, and it is practically a steal deal. The JBL Synchros E40BT is a viable alternative to the BackBeat Sense, and is even Rs. 1,000 cheaper (approximately), but with a lighter build, better range and battery life, the Plantronics BackBeat Sense is an extremely recommendable budget offering for you, if you’re an audiophile looking for a wireless solution, or just a music lover who wants a better pair of headphones to do justice to your awesome playlists.