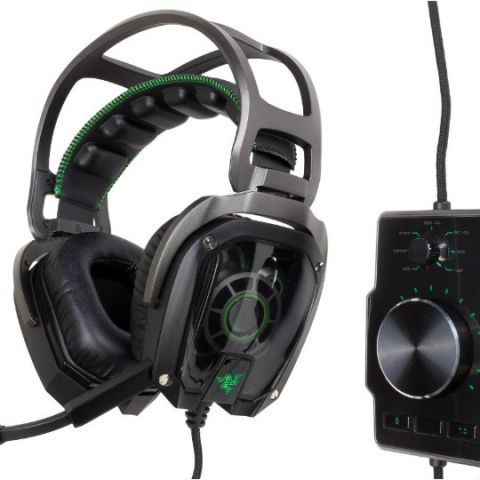 The Tiamat exudes quality and attention to detail. Everything from the packaging to the lighting, the little touches such as the little plastic windows that let others ogle at the five drivers in each cup (yes, five), the quality of the cables, the control pod, everything. Everything that is, except the audio. For a set that's as great looking (and exorbitantly priced) as this, it's surprising that the audio just doesn't live up to expectations.

We’ve had a sort of love-hate relationship with gaming headsets. Some turn out to be amazingly good, sets that truly understand what a gamer needs, others are just plain bad and come bundled with gimmicky features that just don’t make sense. Where does the Tiamat end up? Somewhere in the middle.

The first thing that you notice about the set is just how large it is, especially the ear cups. Despite the size however, the set is very light and reasonably comfortable. It’s also a very well-built set and feels like a premium one at that, seemingly justifying the high price.

The sides of the ear-cups are transparent, giving you a peak at the layout of the drivers and we think that’s quite cool. Razer has provided magnetic plates that can be used to cover up the transparent panel if you’re feeling modest (With a set worth 16k on your head? Hah!). The cables are really sturdy and sheathed and the control pod in particular is very impressive. It’s intuitively laid-out and quite sturdy, especially the dial and buttons. The control pod is also a bit heavy and has a rubber lining on the base that ensures that the pod stays stable on your desk and doesn’t go fluttering about every time you jerk the cable.

The mic is, as expected, retractable and does a good job of picking up voices.

There are a couple of drawback with the design of the set though. The set needs power via USB, presumably for the control pod, and because of that, you can’t just plug this set into your phone or other such portable device. This is obviously a set that is meant only for PC use and it shows. The other drawback has to be the sheer size of the set as it is a bit unwieldy and definitely not something you’ll want to carry around with you.

The amazing design and build quality make us really want to love this set, but alas, the audio quality is just too horrible. The 10 drivers sound awesome on paper but they just don’t work. You do get a decent pseudo-surround effect with the drivers, once configured, but we’ve heard stereo sets that are better. In fact, the set is so bad in 7.1 mode that we stuck to stereo mode so that our hard working ear-drums could have a modicum of respite. To be honest, they're not as bad as we make them sound, but the quality was strictly average, and there was nothing that we experienced that seemed to do justice to the 7.1 layout, especially over a good stereo set and even a 5.1 set such as the ROCCAT Kave.

The Tiamat exudes quality and attention to detail. Everything from the packaging to the lighting, the little touches such as the little plastic windows that let others ogle at the five drivers in each cup (yes, five), the quality of the cables, the control pod, everything. Everything that is, except the audio. For a set that’s as great looking (and exorbitantly priced) as this, it’s surprising that the audio just doesn’t live up to expectations.