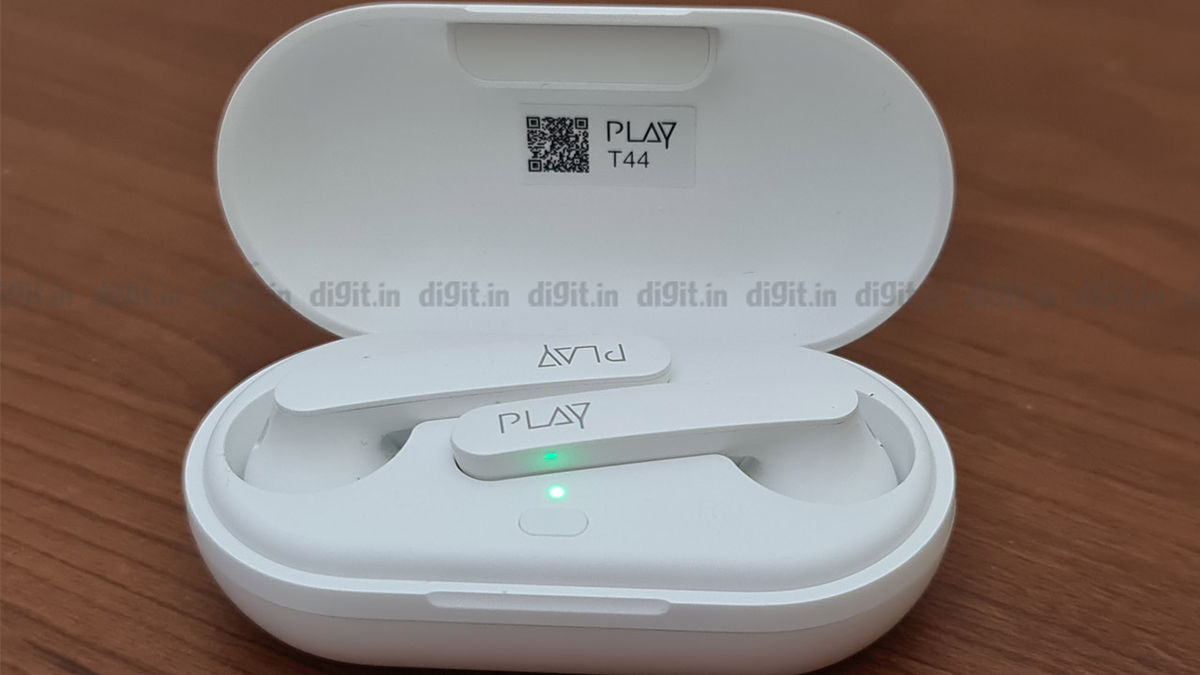 Featuring decent comfort and fit, an IPX4 rating, and good sound quality, the PlayGo T44 true wireless earphones are shaping up to be quite a lucrative buy for under 3K. These earphones are much better-sounding than some sub-3K TWS earphones we’ve recently tested such as the Boat Airdopes 441 and the Boult Audio Airbass Livebuds. The compact form factor of the charging case is also a huge plus for those who value portability. However, if you have smaller ears than usual, the fit may be slightly inadequate. Nevertheless, the PlayGo T44 have a lot going for them and are a good purchase for under 3K.

Due to the trendsetters that the Apple AirPods were, with their distinct pipe-like design, many audio companies followed suit and adopted the design in their true wireless offerings. Play, a Gurugram-based company that has recently moved into the audio segment, recently launched the PlayGo T44 true wireless earphones that feature the famed pipe-like design. However, they cost a whole lot less than the AirPods do, priced competitively at Rs 2,999. In this price range, the earphones have an array of competitors from brands such as Wings, Noise, Boult Audio, Boat, and others. So, let’s delve into how these AirPods lookalikes fared in our review. 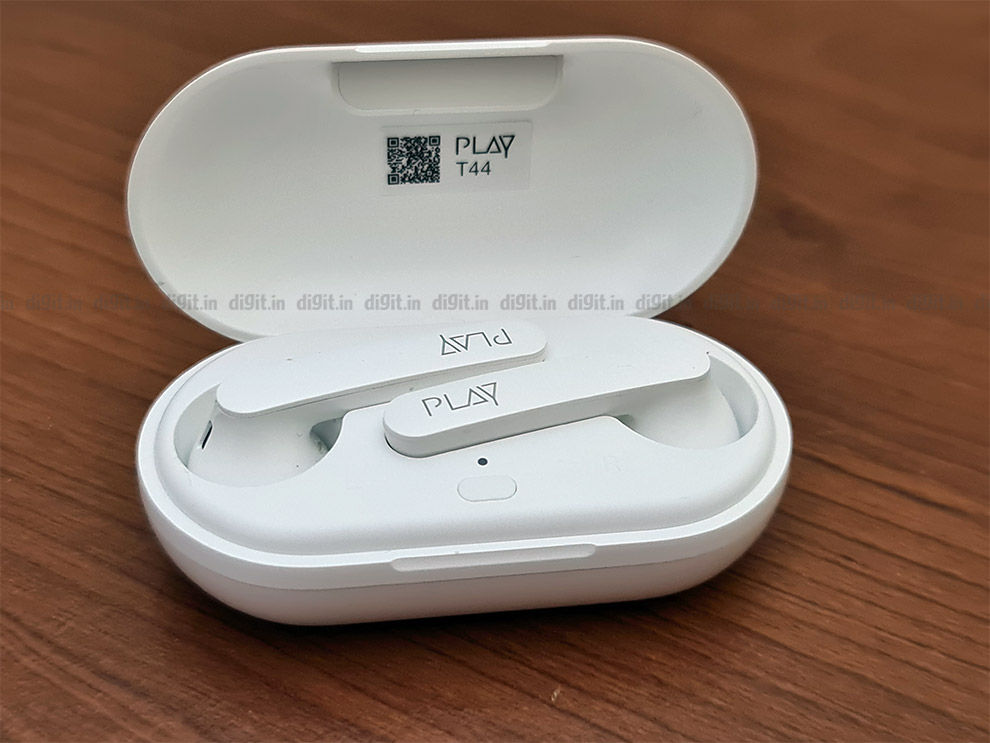 The PlayGo T44 may have adopted the general design of the Apple AirPods, but there are some tweaks made to the design that make them distinctive. The charging case, for one, is an elongated pill-shaped design that is both pocketable and robust. Primarily made out of the plastic, the white charging case features a matte texture that feels good to the touch and is also pretty resistive to fingerprints and dust. 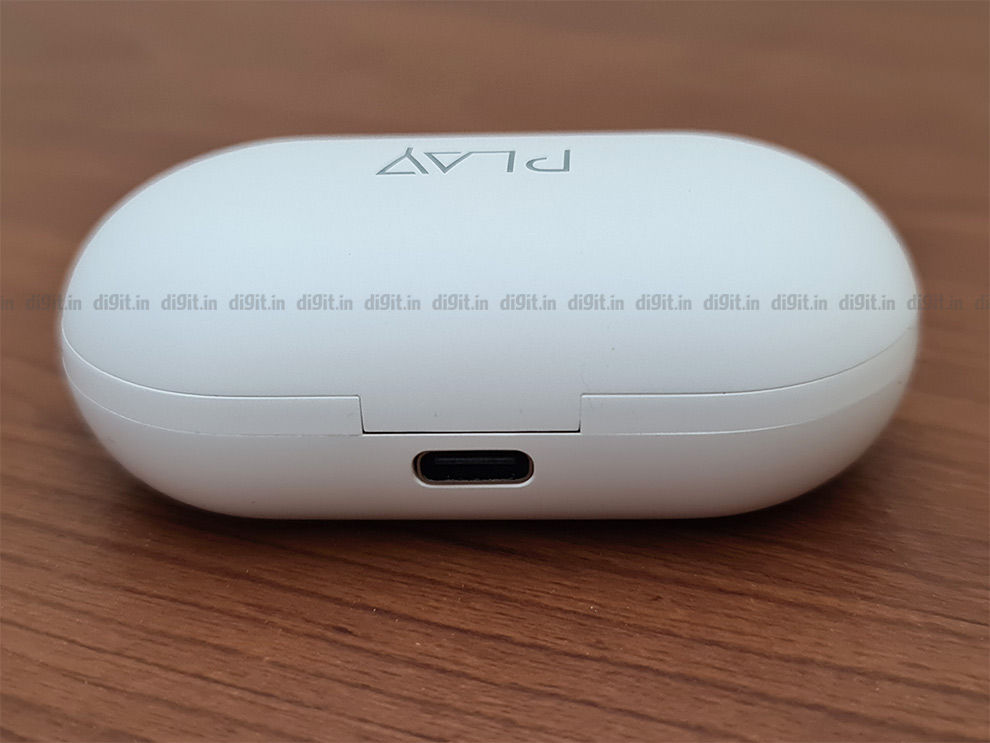 The Play logo is stamped onto the top of the case while the rear features a USB Type-C charging port. Plenty of affordable true wireless earphones have now finally adopted USB Type-C instead of the dated micro-USB, and it’s great to see that the PlayGo T44 follows suit. Aside from having a smaller form factor, the case is also lightweight, weighing a mere 35g (without the buds). The earbuds weigh about 5.5g each, bringing the weight up to 41g. Sadly, there’s no LED battery indicator outside the case. Instead, the indicator sits within the case and you will need to flick the case open every time you wish to check the battery status, which is quite inconvenient. 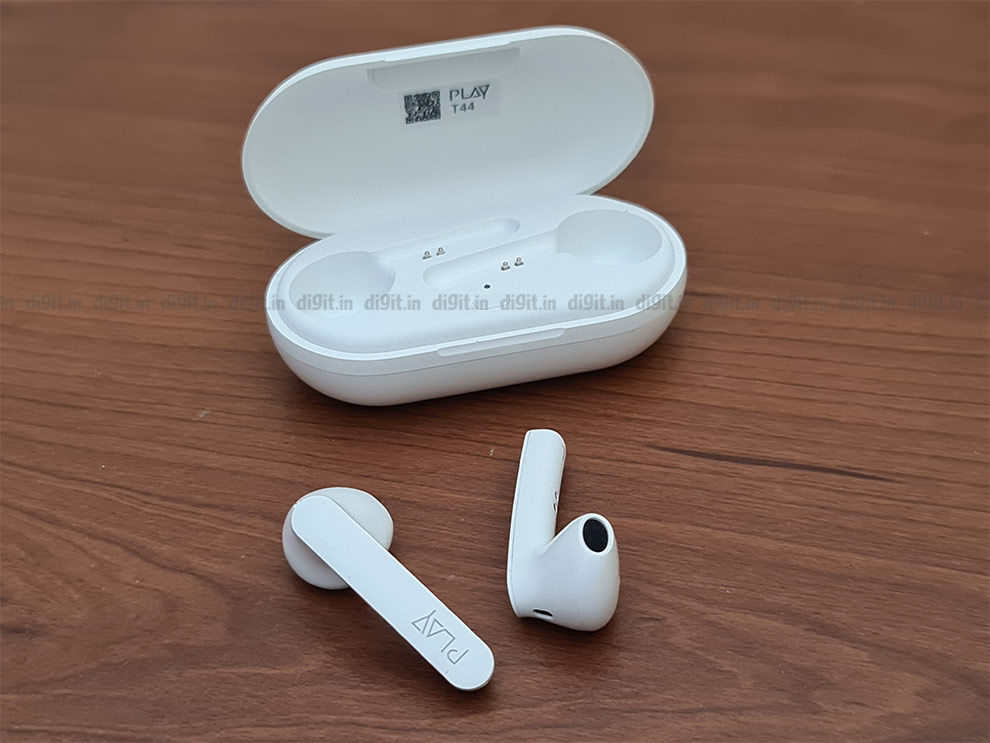 The case opens up pretty easily with two hands, but we found it pretty taxing to pry it open with one hand. The buds sit within the case horizontally and the magnets holding them in place are extremely strong. The earphones don’t budge even when the case is dropped, which is impressive. The magnet on the lid is pretty strong as well, and the case shuts with an audible and satisfying snap. 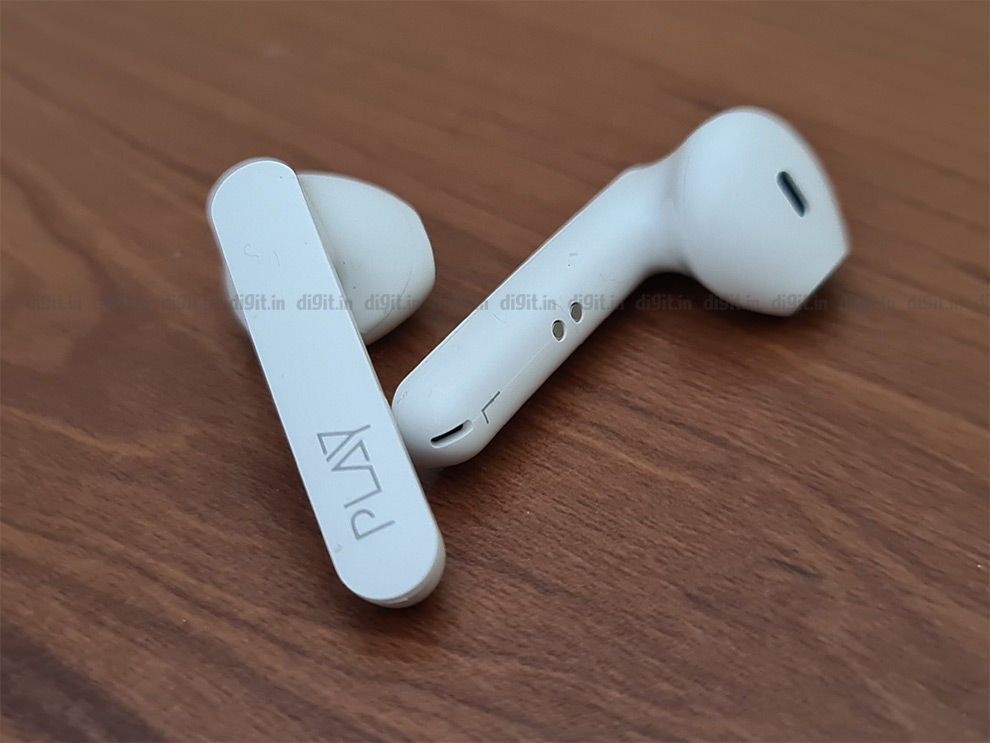 Coming to the earphones themselves, they also feature the same plastic material and matte finish as the case. The long pipe-style stems feature the microphones, the magnetic points that connect to the charging case, and the Play logo. The top part of the stem houses touch sensors that can be used to control music playback and calls. More on their functionality later. 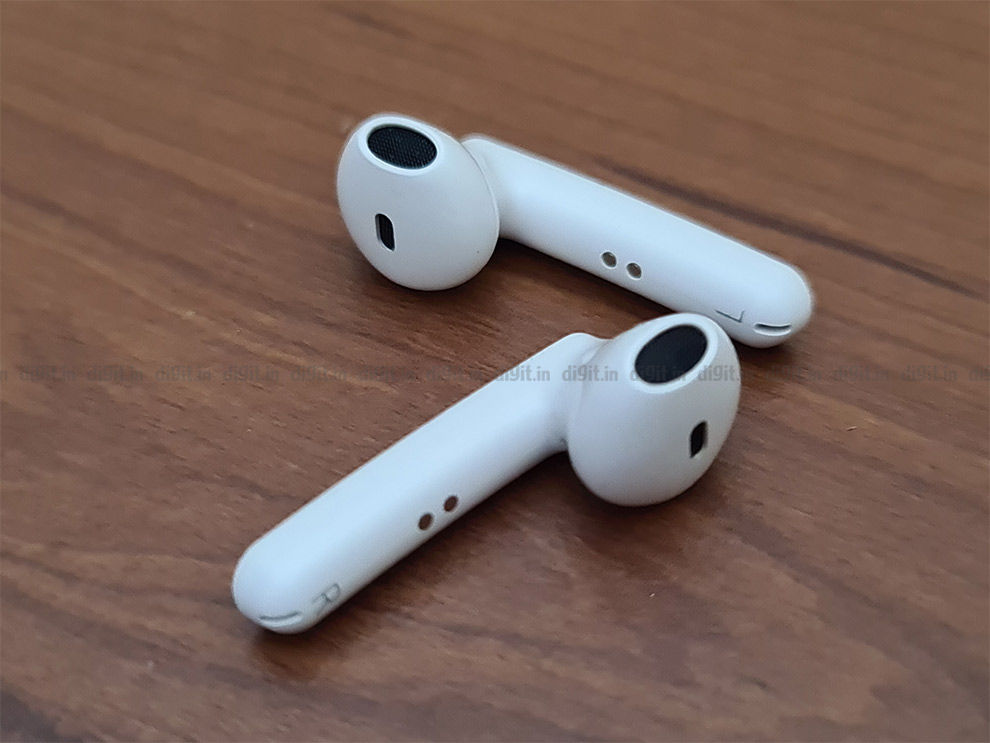 The earbuds, much like the AirPods, lack silicone eartips and feature a half-in-ear design. Now, this is a very polarising design. While some swear by it, others absolutely detest it. We found the fit to be pretty snug and secure in most ears, despite the lack of silicone eartips. However, if you have smaller-sized ear canals, the earphones will definitely tend to slide out on occasions. The reviewer has smaller than usual ears and found that the earphones aren’t too secure during jogging or high-intensity workouts. 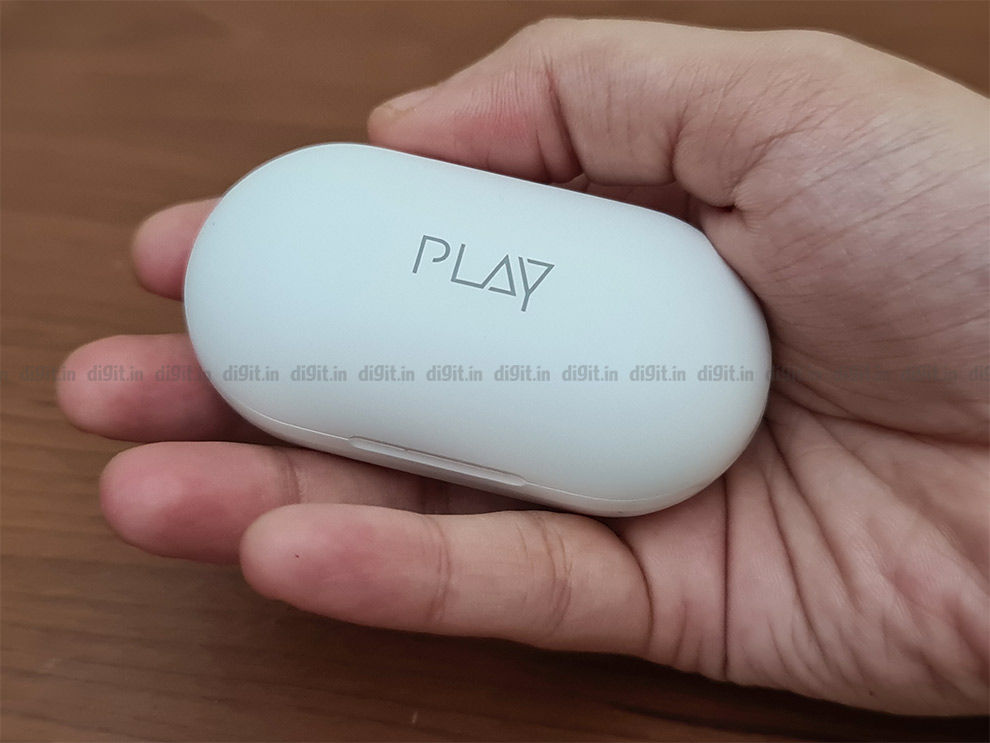 Overall, the earphones are extremely lightweight and due to that, they tend to stay put in most ears without the need for silicone tips. In comparison to the Realme Buds Air, we found the fit to be much more secure and comfortable as well. The compact charging case also impressed us with its aesthetic look and feel.

The PlayGo T44 earphones aren’t something we’d call feature-laden, however, they do feature some pretty nifty features. You get Bluetooth v5.0 which translates to pretty solid connectivity and a wireless range of about 33 feet (without any obstacles). The connection stayed strong even if we put a wall between the earphones and the source device, which is quite decent.

They also come equipped with an Auto Re-connect feature that essentially connects to the last paired device as soon as the buds are removed from the case (if the Bluetooth of the device is turned on). The feature worked extremely seamlessly and the connection to the paired device was almost instantaneous every time we pulled the earbuds out of the charging case. The earphones also come with full touch controls that can be used by tapping on the top half of the stem. A double-tap on either side pauses/plays the music while a long press on the right earphone skips to the next track and a long press on the left takes you to the previous track. Triple-tapping either earbud will summon your device’s voice assistant (Google Assistant or Siri). You can also accept or reject phone calls with the touch controls. Unfortunately, there is no way to control the volume of media or calls via touch controls.

The touch controls seem very intuitive, however, they’re a bit of a hit and miss. There’s a lot of tapping required and sometimes, the earphones would refuse to register taps. So, when we tried summoning Google Assistant by triple-tapping, the earphones just registered two taps and paused the music instead. Often, even pausing the music would take 2-3 tries to get it right.

The earphones also come equipped with IPX4 sweat and water-resistant rating, which means it can easily shrug off sweat and light rain, making them suitable for workouts and for use in rainy conditions. For charging, as mentioned above, you get the future-proof USB Type-C charging instead of micro-USB, which is excellent at this price point. The earphones also support the standard SBC and AAC audio codecs. We would have loved to see aptX support on this, but we won’t complain much about that at this price point. 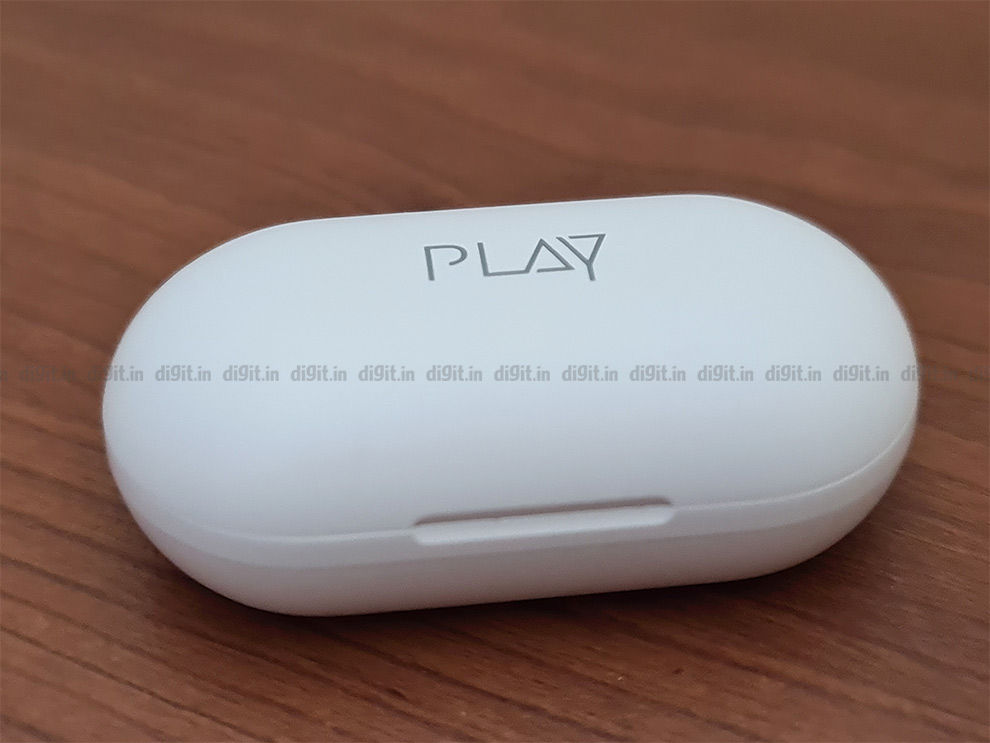 Finally, coming to the battery life, the PlayGo T44 true wireless earphones are capable of 4 hours of playback on the earbuds along with 4 additional charges via the charging case, bringing the total to about 20 hours. The numbers here are mediocre, at best, especially on the buds. The standard in true wireless earphones is generally about 6 hours through the earbuds, even on affordable models, so 4 hours of playback is definitely underwhelming.

Moreover, in our tests, we found that the battery on the buds actually last a tad bit lesser than 4 hours. The PlayGo T44 clocked in a music playback time of 3 hours and 35 minutes at 50 per cent volume, which is quite disappointing. Nevertheless, the case did charge the earphones 4 times over, so that figure is quite accurate, as per our tests. Overall, the PlayGo T44 feature mediocre battery life, wonky touch controls but solid Bluetooth connectivity and USB Type-C charging. Charging the case from zero battery to full took approximately 2.5 hours in our tests.

Featuring 10mm drivers, the PlayGo T44 has a pretty likeable sound profile. The company claims that the earphones come with proprietary EBEL (Enhanced Bass Extra Loud) drivers that output punchy bass and can get quite loud. We definitely found the latter claim to be accurate since the earphones got pretty loud in our tests, which meant we could listen to music comfortably in the 40-50 per cent volume range.

However, while the bass is definitely pretty punchy, it is not at all overexaggerated as we usually witness in other affordable true wireless offerings. There’s definitely weight in the lower frequencies as compared to the mids, but the highs are equally matched creating a sonically-pleasing V-shaped sound signature. In Pull me Under by Dream Theatre, the cymbals sound just as lively as the bass guitar. However, there are some odd peaks in the highs which cause the sound to become a tad shrill at times. 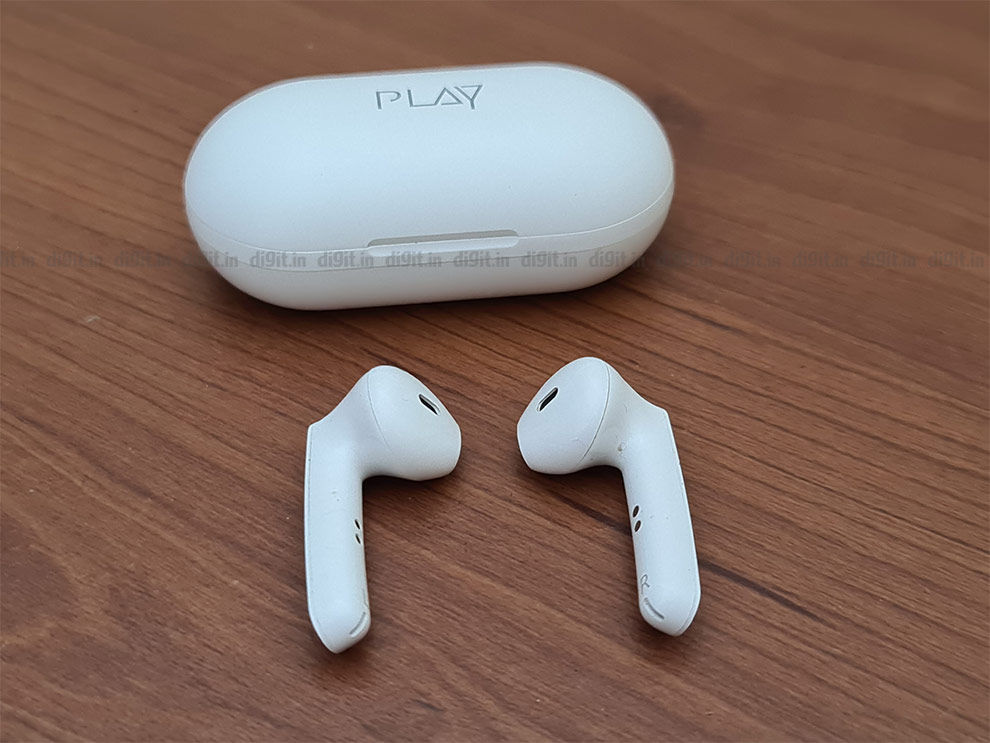 The vocals, due to the V-shaped signature, can seem slightly muted, especially when it comes to male vocals. Lead guitars sound detailed but are slightly relegated to the background with the low and high-frequency instruments stealing the limelight. Nevertheless, in vocal-centric tracks, such as Hello by Adele, with minimal instruments, you will actually get to appreciate the clarity and sparkle of vocals.

Soundstage and imaging, however, are a bit of a miss on these earphones. Tracks such as Selkies by Between the Buried and Me can sound a bit chaotic due to overlapping of instruments. Nevertheless, we still are impressed with the overall sound quality with the punchy yet controlled bass, clear vocals, and emphasised highs. 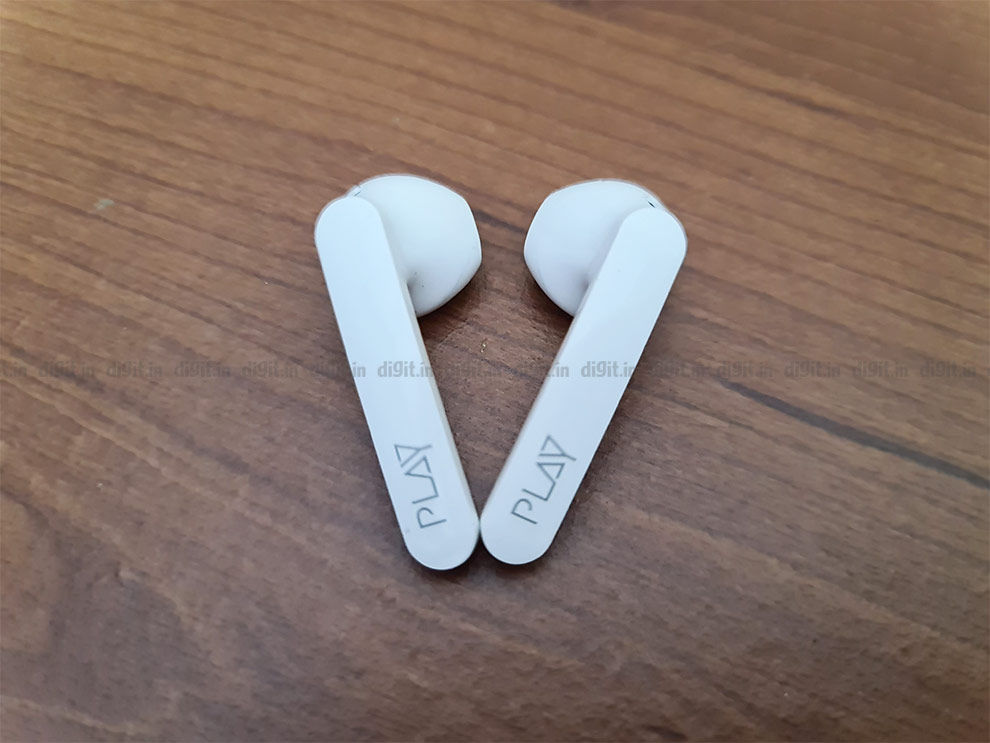 Coming to the microphone, the advantage of the long stems is that the microphone is a lot closer to your mouth than the ones on other true wireless earphones. Therefore, clarity and audibility go up by quite a lot. On calls, we received no complaints about the clarity and loudness of our voice. Our voice didn’t sound muffled or distant to the receiver, however, the microphone does tend to pick up a lot of ambient sounds.

Featuring decent comfort and fit, an IPX4 rating, and good sound quality, the PlayGo T44 true wireless earphones are shaping up to be quite a lucrative buy for under 3K. These earphones are much better-sounding than some sub-3K TWS earphones we’ve recently tested such as the Boat Airdopes 441 and the Boult Audio Airbass Livebuds. The compact form factor of the charging case is also a huge plus for those who value portability. However, if you have smaller ears than usual, the fit may be slightly inadequate. Nevertheless, the PlayGo T44 have a lot going for them and are a good purchase for under 3K.