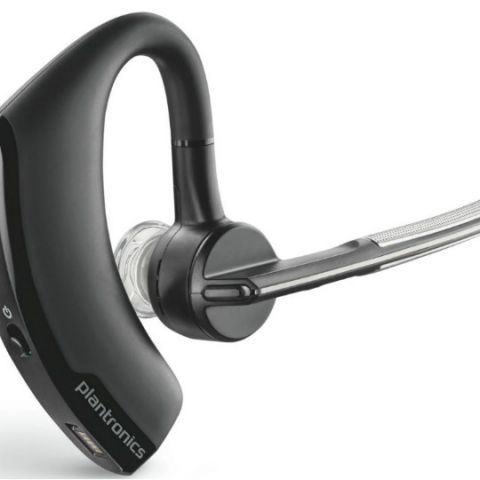 Plantronics has positioned the Voyager Legend CS more at the office user, than someone who needs a Bluetooth headset just for using with the smartphone. It costs a lot of money, and doesn't boast of the flashiest or sleekest design you will find on a headset, but it does what it is supposed to do brilliantly. The call quality is brilliant, the battery life is very good, and the single headset solution for your smartphone and your desk phone makes this infinitely comfortable to use. A must consider product, if you tend to use the wireline phone in your office quite often.

Before we get down to the specifics, it is vital to say that the Plantronics Voyager Legend CS package is a simple upgrade over the standalone Voyager Legend offering; combining the latest edition of the Voyager Legend headset with a wireline phone base station. The headset connects to the base station and your mobile phone via Bluetooth and via the wired route to the phone on the desk. Once you have everything set up, you can use the headset for both devices - the smartphone and the wireline. Convenient? Quite. But let's find out if its performance is up to the mark.

Build & Design
There is no getting around the fact that the entire package presents potential for complexity because not only do you have a mere headset but also a base station, something that's not commonly found with Bluetooth headsets. You have the Voyager Legend headset, which itself is not the slimmest and sleekest Bluetooth headset around. At 18 grams, it is one of the lighter ones out there and is extremely comfortable for wearing over prolonged periods of time. Then there is the base station, which is where the Voyager Legend docks and charges itself. The base station is also what connects the headset to the wireline phone on your desk. With the HL10 lifter (which was a part of the review package sent to us) and the connecting cable to hook up the desk-phone to the base station, the headset can be used to make and receive calls.

Coming back to the design elements, the Voyager Legend has the signature Plantronics design. The boom microphone arm reminded us of the Plantronics Discovery 975 headset. Despite the plastic buiild, the headset itself feels very premium and well built. The quality of materials do not betray any cost cutting. For a headset that isn’t exactly affordable for most people, the attention to detail is pretty exquisite. The thick ear loop features a matte black finish with a slight soft feel when pressed against the ear. On the outer face of the loop are the power and volume keys along with the proprietary charging port. The call connect key is closest to the ear end of the boom arm and being the only key there, picking up a call is a swift activity. The voice command activation key sits somewhere along the length of the boom mic arm and isn't a key that will you will use the most. That's the reason why the call connect key has been given primary location. The arm itself continues with the matte black finish for a certain part before the grey coloured finish takes over. 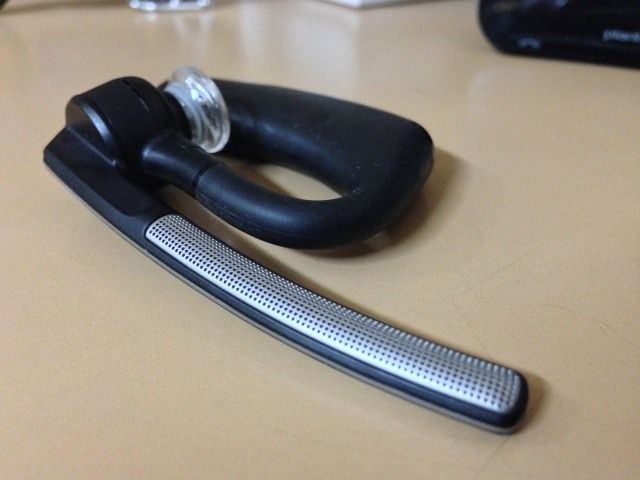 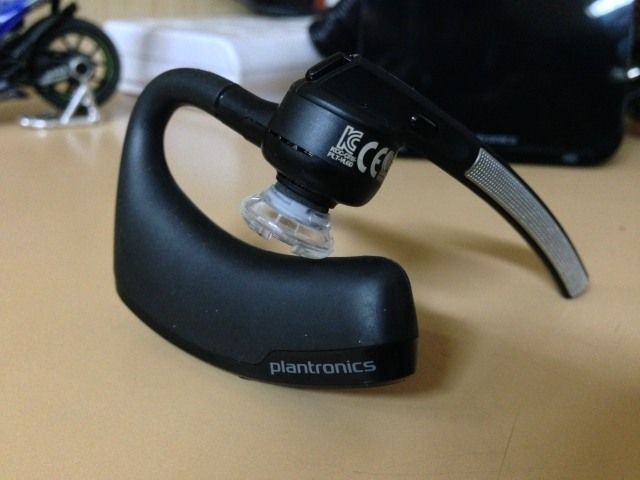 A standard gel ear tip comes attached to the Voyager Legend but Plantronics also bundles larger and smaller versions along with two foam earbud covers. Again, comfort levels will depend from person to person, but Plantonics has made it extremely convenient to swap between the ear tips - press down and twist left to unscrew the existing top. Then insert press down and screw right to fit the new one. This is perhaps the most premium aspect of the build quality and usability of the Voyager Legend headset.

Before we get down to the performance, there comes the process of setting this up. You can switch the Voyager Legend on and pair it with your smartphone fairly normally. To hook up the wireline deskphone to it, there is the interface cable that connects your phone to the dock and the HL-10 handset lifter accessory. This lets you answer calls on that particular phone as well as use the headset. Pairing between the base station and the headset is required if you have connected the wireline phone to it. Press the Bluetooth key on the base station till it alternates between Red and Blue. On the headset, press and hold the call key till the voice prompt says “Pairing”. Once the pairing is successful, the LED on the base station will remain solid blue. Plantronics says that the base station and the headset are paired out the box. But in case you have reset either one, all this process needs to be redone. The pairing process with the smartphone is pretty much the same as every other Bluetooth headset out there. 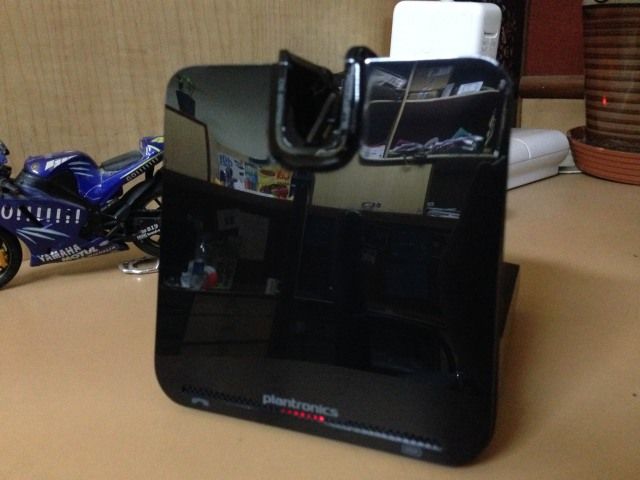 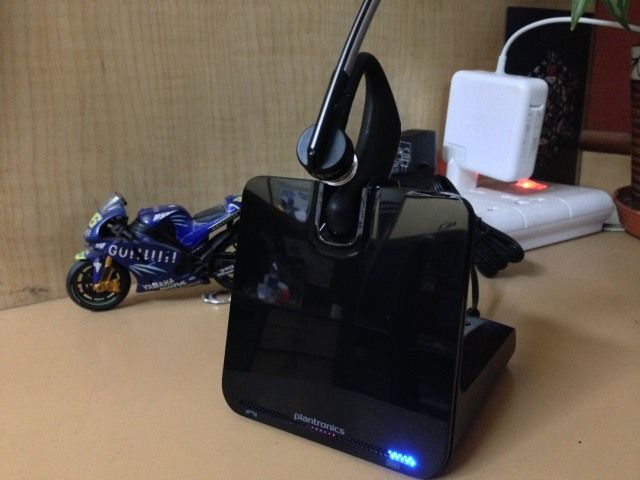 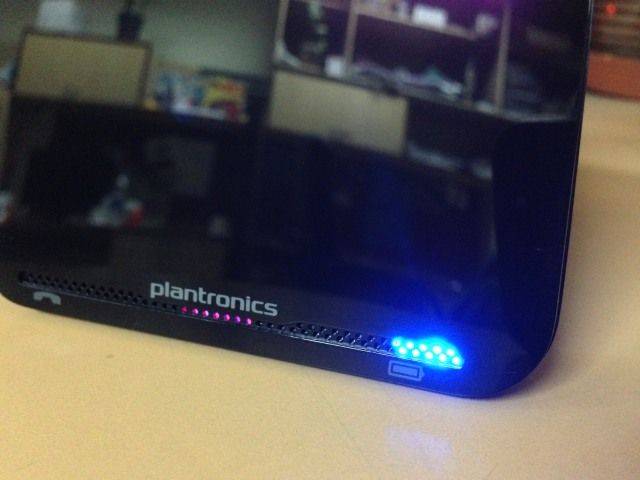 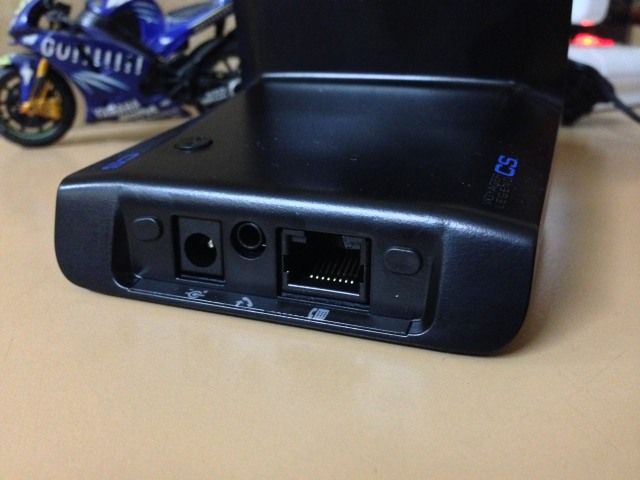 The latest update of the Voyager Legend gets three microphones instead of the standard two microphones earlier. This has made a remarkable difference in the audio quality in noisy areas. The idea behind this update is to improve noise cancellation. While the caller at the other end of my line was able to hear me clearly despite the general noise on our street, they were also able to hear certain elements of the riff-raff from my ambience. The call quality for both parties is significantly better with the remarkably improved audio going through.

Plantronics claims 7 hours of talktime and 11 days of stand-by time on a single charge of the Voyager Legend. I used it for a couple of hours of calls for each of the three days and it gave me 8 hours a day. The battery recharge prompt still hasn’t graced me with its presence! Nothing suggests that the Voyager Legend will not live up to the battery life claims.

Voice commands have become fairly standard in the higher priced Bluetooth headsets. The Voyager Legend is no different. While it is a good feature to have, personally, I am not a huge fan of:

1. Remembering a plethora of commands and
2. Screaming at the headset and drawing unnecessary attention.

Despite all the positives, you do need to remember that there are certain caveats which is the case with any good product! The headset itself has a proprietary charging port and can only be charged with the base station. This means that if you happen to be away from the base station for a while and the Voyager Legends needs a charge, you will need to fish out the proprietary connector cable. So, this becomes another thing you need to remember to pack, the next time you are traveling!

To buy or not to buy?
Plantronics has positioned the Voyager Legend CS more at the office user, than someone who needs a Bluetooth headset just for using with the smartphone. And quite frankly, it’ll be an overkill for regular users. It costs a lot of money and doesn’t boast of the flashiest or sleekest design you will find on a headset, but it does what it is supposed to do, and that too, brilliantly. The call quality has massively improved and the battery life is very good. It is a "single headset solution" for your smartphone and your desk phone which makes it extremely comfortable to use.  It's very well built to sort of make up for the rather understated design. A must consider product if you tend to use the wireline phone in your office quite often.