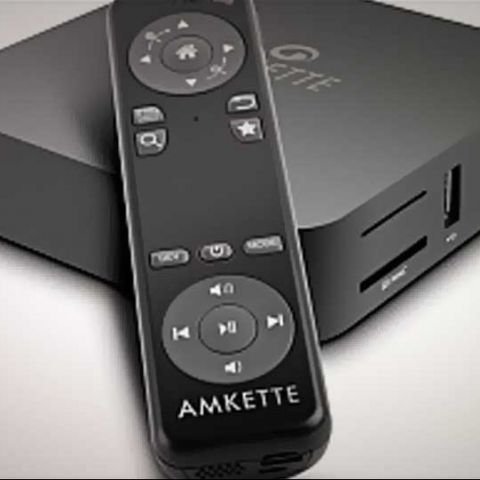 The updated Amkette Evo TV is a polished product. Its unique elementï¿½ motion control ï¿½ works smoothly and with a much more assured response. The updated OS and more RAM have made considerable difference in terms of how quick this device responds.

When we had reviewed the Amkette Evo TV in the autumn of last year, it had come across as a rather unique idea, but one that had still needed refinement. This time around, it is a much more polished product.

Build & Design
On the outside, the look of the Amkette Evo TV is exactly the same as the previous edition. A fairly compact device, and the old saying “if it isn’t broke, don’t fix it” is not to be forgotten. The whole host of 4 USB ports and the memory card reader are pretty much unmatched by rival media players in terms of sheer numbers! At an average, you will usually find 2 USB ports on most HD media players. The external media can be connected to the ports that are all placed on the sides. The front is completely clean, with just one LED that turns red when in standby mode and blue when powered on.

As we had mentioned earlier, the design of the updated Evo Box is exactly the same as the previous edition. And that is a good thing, because we quite like the size and design of the Evo Box. It is smaller and thinner than the WD Live as well, which is a commendable job. The build quality is quite good, even though it is an all-plastic casing. The top panel has the matte finish, but the frame on the sides is glossy black. You might want to be a bit careful when connecting an external USB drive to it, lest the device ends up with scruff marks around the ports.

Features & Performance
One of the two big differences between the Evo Box and the previous generation Evo TV is the difference in RAM. The upgrade has brought the Evo Box with 1GB of RAM, as against the 512MB earlier. And that has made immense difference in the startup time and how smoothly the device works.

The Evo Touch remote is the most unique feature of the entire Evo Box package. It lets you control the device and move around the interface by waving the remote around in the air. Critically, the design and the way you use this remains exactly as it is from the previous edition. Critically, the on-screen response is much smoother and assured. We had pointed out the inconsistent nature of the motion gesture remote with the first edition. Playing Angry Birds should be a lot more fun now!

While the interface on the Amkette Evo TV remains pretty much the same, the newer Ice Cream Sandwich OS base makes the experience smoother than before. The horizontal scrolling works better now, but the categorization of apps and icons is well done. There is a whole lot of content you immediately are hit with the first time you get to the home screen! With access to the Play Store and even a secondary re-done Evo app store, you will have no shortage of apps on the device.

As an HD media player, the Amkette Evo TV’s capabilities remain the same as before. It will upscale standard definition content fairly well. HD content plays back smoothly, but you will not have too many picture tweaks, the way the likes of the WD Live or the D-Link Boxee Box offer. But the issue still remains with the compatibility with certain video containers. During out tests, certain MKVs are MP4s either did not play back, or did not have any audio playback. Still, the Amkette Evo TV does feature improved compatibility, undoubtedly, but is still no match for the likes of the WD Live and the Boxee Box.

The interesting addition is the XBMC capability on the device itself, which pretty much makes this a unique proposition among all HD media players. Movies get a completely different angle with XBMC data scraping – summaries, fan-art, reviews etc., and there is no need to hook up a PC for that. You can pull data for all your media on the connected storage.

Unfortunately, what the Amkette Evo Box still does not do is play good with the home network streaming applications like the PS3 Media Server. If that can be added somehow in a future update, this can come closer to the better HD media players in the market.

Bottom Line
The unique features do add some premium to the price tag. If you need a robust HD media player for movie playback, the WD Live and the D-Link Boxee Box would make for better deals. But if the extras are what entice you more, Amkette Evo Box will be money well spent. The gesture remote control makes it easier to get down with gaming, even for those who aren’t very quick to adopt new technology. And that just increases the appeal of the Evo Box.