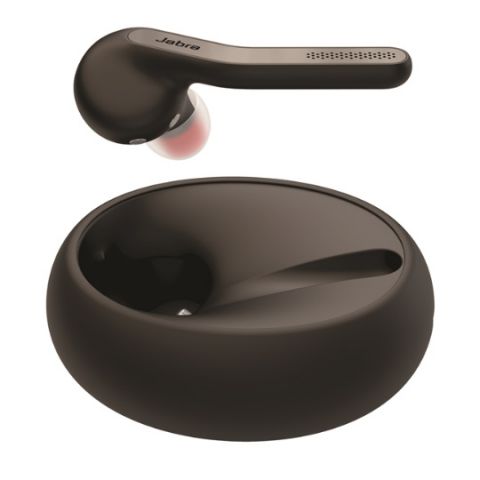 Jabra has launched the Eclipse wireless headset which will be available on Flipkart by mid-October at a suggested retail price of Rs. 7,999. The headset weighs 5.5 grams and comes with EarGels that are designed to block out background noise. The device comes with no buttons or switches. To take a call, the user will have to double tap the headset. It also allows users to customise the headset and take advantage of its functionality through the Jabra Assist app. The headset also comes with a carry case that is also a portable charger. The carry case can extend the battery life of the device by up to seven hours.

Real sound by design. They say the best things come in small packages, and the Jabra Eclipse proves this point exactly. Weighing just 5.5 grams, this lightweight wireless headset combines an unrivalled sound quality with sleek design and ultimate comfort. If you want to keep up with conversations – without compromising on style – the Jabra Eclipse will be your new best friend.

Designed for style and discretion
In spite of its incredible lightweight design, the Jabra Eclipse is also a powerhouse of technology that delivers superior audio performance and comfort. Say goodbye to bulky ear hooks and slip in the snug-fitting EarGels. Not only are they designed to block out background noise so you can concentrate on the sound you want to hear, they’re so discreet and comfortable you’ll forget you’re even wearing them.

Whatever you do and wherever you go, you can now take your calls with you. In a headset that does not cramp your style.

As good as being there yourself
Using HD voice technology, the Jabra Eclipse can give you a revolutionary audio experience. The music-grade speaker transmits the full dynamic audio range with warmth, depth and clarity so you can fully concentrate on your calls. When that important business call comes in, Eclipse gives you conversations so clear and crisp it’s as if you’re almost standing next to the person.

Whether you’re at a busy airport, in your car or walking down a noisy street, sound remains optimal thanks to the Jabra noise cancellation technologies. The only thing people on the call will ever hear is your voice. This gives you a new kind of freedom to take and make calls without ever having to consider your environment.

No buttons, no switches, no hassle
Jabra Eclipse is as intuitive as it is pioneering. When you want to make a call, simply double tap the headset. And with the Jabra Assist app, it’s even easier to customize the headset and take advantage of functionality you need in your daily life.

Pocket power
Jabra Eclipse comes with a carry case that doubles up as a portable charger that gives your  Jabra Eclipse up to seven hours of talk time, in addition to the 3 hours of the headset. Keep it in your pocket and you’ll never have to worry about running out of battery and missing that important call.

"An on-the-go lifestyle has made more and more people dependent on their mobile phones. While they appreciate the value of a Bluetooth headset, some won’t consider using one because of their appearance”, says Darcy Clarkson, Head of Mobile division at Jabra.
“We wanted to crush this notion and create a headset that delivered both outstanding sound quality and a great design,” he says.

Available online with Flipkart and also in stores in black edition by middle of October, and in white edition by end-October. Suggested retail price at Rs.7999.