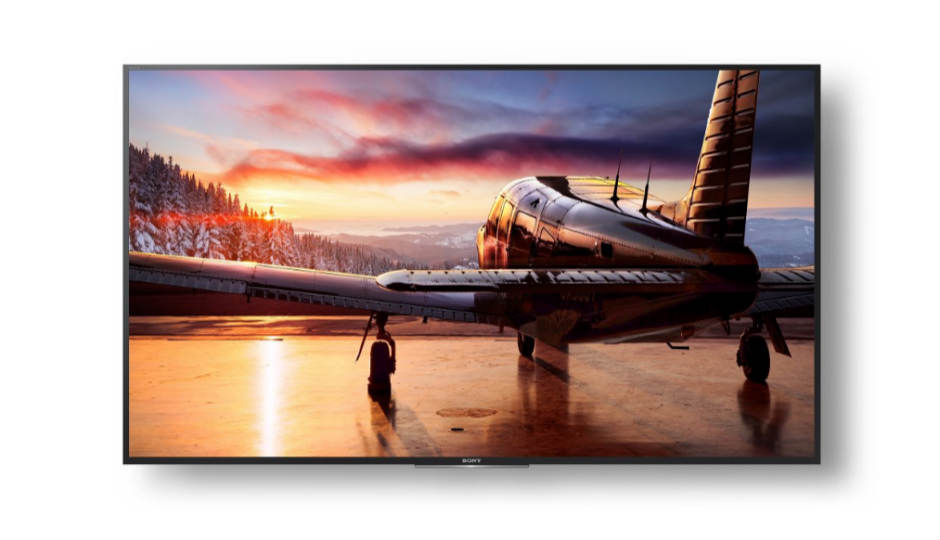 Sony has launched a new television under its Bravia Z9D series in India. Called the Sony Bravia KD-65Z9D, the TV is priced at Rs. 5,04,900 and will be available at Sony Centers and select electronics retail stores from October 20. Pre Booking will start from October 15 and will go on till October 31. The Sony Bravia KD-65Z9D features a 65-inch 4K HDR panel with a X1 Extreme image processor. Further the TV runs Android TV v6.0 with Sony’s own interface.

The new “Z” signature designates a significant step forward and embodies a perfect accuracy in display technology. The Z9D series features a newly developed 4K image processor - the 4K HDR Processor X1™ Extreme and a unique backlight technology- Backlight Master Drive™, to attain extraordinary contrast and extremely accurate wide colour expression. It offers an even more impressive visual experience with more depth, texture and realism on the screen than ever before.

The object-based HDR remaster can reproduce scenes with the detailed texture and the appearance of real life. On top of current up-scaling database, the 4K HDR Processor X1™ Extreme has additional Sony-exclusive database for noise reduction. By searching through thousands of picture patterns, the dual database processing removes unwanted noise and up-scales every image to super clear 4K image.

In combination with the latest accurate lighting algorithm, discrete LED control of Backlight Master Drive is able to dim and boost each LED individually. This innovative algorithm delivers total precision for unparalleled contrast and realism whereas previously, local dimming was controlled in zone consisting of several LEDs.

Calibrated beam LED design, the unique optical structure gathers the emitted LED light in a spot and focuses the drive area more precisely to display higher contrast. This also reduces light diffusion and the flare effect that can be seen on other full-array LED TVs.

Supported with X-tended Dynamic Range™ PRO the technology enables in producing better contrast by precisely balancing the light output across the screen, dimming some areas and boosting others. It reveals a brightness range three times that of a conventional LED-backlight TV, and it enhances any source to near HDR quality with a wider range of brightness. Also featuring a TRILUMINOS™ Display it aids in translating vibrant and enhanced for colour accuracy.

The Z9D series draws inspiration from the ‘Slice of Living’ design concept and comes with clever cable management keeping the wires out of view and mounts it close on the wall like a picture frame.  It has a slate design that encapsulates the ultimate experience where viewing goes beyond the screen. From the front, the design exudes sophistication in the form of a simple black slate table top design, letting viewers immerse themselves in the stunning power of 4K HDR. From the back, the design keeps all the cables completely concealed, ensuring that the device strikes an elegant look from any angle.

A world of possibilities with Sony’s Android TV

The new Z9D series runs on the latest Android TV™ version 6.0(Marshmallow) with Sony’s exclusive user interface. Sony’s Android TV™ lets one explore a world of movies, music, photos, games, search, apps and more. This series comes with an expandable memory where users can use USB drive for extra app storage. (In addition to the built in memory)

With Google Cast™, consumers can easily send content from smartphone or tablet to the TV. Google Play™ offers a huge and ever-growing choice of apps which are customized for TVs. These features simply let users enjoy what they do on a smartphone or tablet, on their bigger TV screen.

From live TV broadcasting to Internet video services or Netflix, the new seamless user interface Content bar includes enhanced content navigation with genre filtering function. Instead of selecting a programme from a bunch of channels, users can easily choose one from their favourite genre such as sports, music, news, and so on.

Sony’s Android TVs delivers features which makes the TV viewing via DTH/STB, an extremely user friendly experience. Furthermore, the inbuilt Program guide & one TV Remote controlling both DTH/STB & BRAVIA supports in delivering a much needed experience for the Indian Market where customers spend majority of their TV viewing time into DTH/STB contents than any other online contents/TV feature.

In addition, all the 4K HDR series are Netflix Recommended TVs, which means customers get the best experience for Netflix. This is attributed to the special features like direct Netflix button on the TV remote, quick app launch and easy navigation and switching between apps and inputs.

Pre-booking of KD-65Z9D will be available from 15th October to 31st October in all Sony Centers.

The new Z9D series will be available at select Sony Centers & electronic stores in India.