The latest leaked images finally unravel the mystery behind charging functionality of the Moto 360. 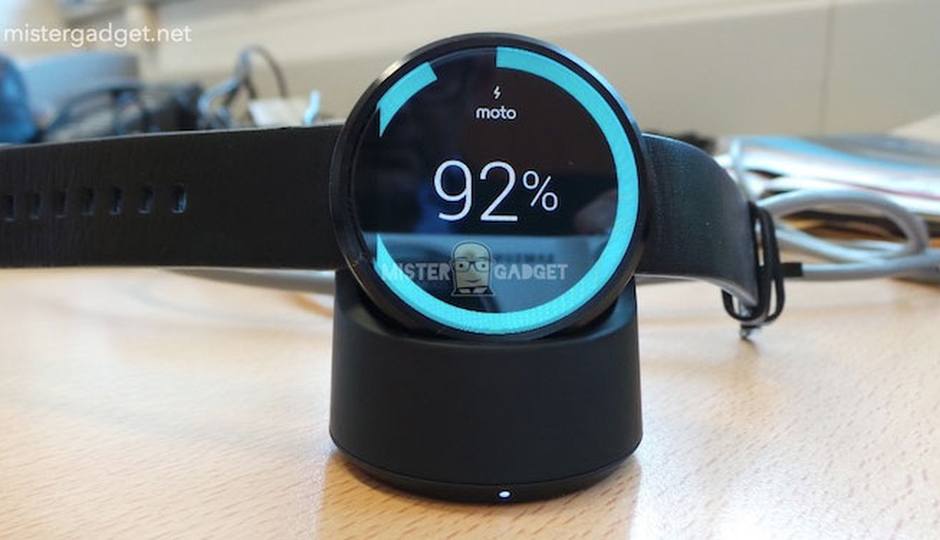 Motorola has already confirmed launching a smartwatch – Moto 360 – later this year.  But, the company has revealed a very few details about the smartwatch. However, that hasn't stopped rumours and leaks to make their way to the web. And now an Italian blog, called Mister Gadget, claims to have images of the Moto 360 and its Qi-based wireless charging functionality.

The images reveal Google's Android Wear-based smartwatch with a small dock and charging via Qi. The dock has a customised built that allows users to place the smartwatch in it. Users will be able to see the display, receive notifications and other information while the device is charging on the dock.

Apart from charging functionality, images also reveal Moto 360's optical heart rate sensor, plus a label that confirms IP67 water and dust resistance. The latest images reveal a slightly refined design as compared to the ones revealed at the Google I/O.

Google had earlier this year announced its new Android Wear platform for wearable devices. Motorola and LG were among the first ones to announce smartwatches based on the new Google platform. So far, LG has launched its G Watch, while Samsung has launched the Gear Live.

There's been a huge anticipation for Motorola's smartwatch as it differentiate itself from others with its rounded-display. Motorola hasn't revealed much about the smartwatch, but has been teasing on social networking websites for a while.

Top Smartwatches to buy in India