Cicret bracelet will turn your arm into a tablet

The 'Cicret' bracelet projects the screen of your smartphone directly onto your wrist. 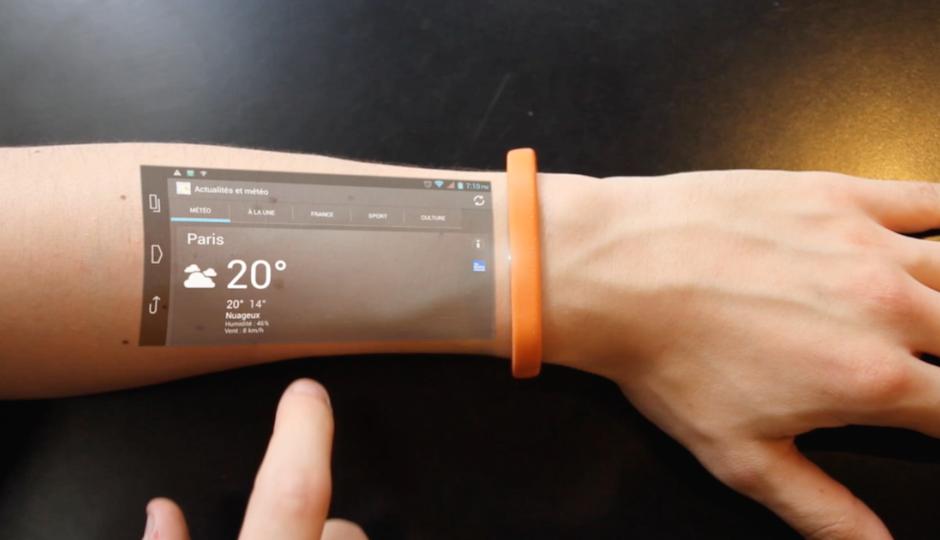 Cicret bracelet will turn your arm into a tablet

A new Cicret bracelet can detect your gestures and projects a screen onto the skin, so you can take calls, check your emails, read books, all from your arm.

Designed by Paris-based design company, the prototype bracelet can remotely connect with a mobile device and emits the interface onto the wearer’s arm. The prototype comes with a projector and a row of eight proximity sensors that pick up your finger movements allowing you to read emails, play games, answer calls and check the weather on the surface of the skin.

The device will be packed with an accelerometer and a vibration module, along with an LED for notifications. The device will support Wi-Fi, Bluetooth and a Micro USB port for connectivity.

The company has shared a promotional video on its site which has got over 3 million views on YouTube. The video shows the physical interaction between user and product, with the user swiping and tapping through the various applications and communicating with their smartphone via their forearm. However the company has clarified that the prototype will be ready in the next 2-3 weeks and the images shown in the video are mocked up, for demonstration purpose only.

Cicret is expected to hit the mass market in June 2015 and will be available in 16GB and 32GB models, costing upwards of $400 (£250). The company aims to raise the money for the device through crowdfunding and is asking users to donate directly through their website.

Wearable tech has been labeled “the next big thing” and according to a report by Credit Suisse the industry was set to grow from around $3 billion to $5 billion this year and will reach $50 billion within five years. Apple's iWatch is expected to trigger the next change in wearable industry, tripling it in the next year.