The Blaupunkt TV comes with a voice enabled remote control. It is 7.9mm thick and sports 3 HDMI ports. 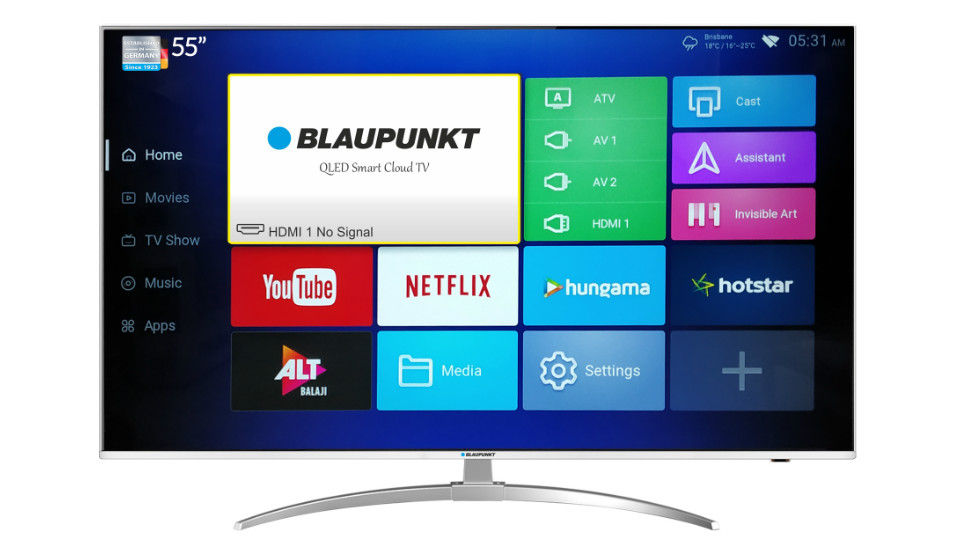 Blaupunkt has launched a 55-inch 4K QLED TV priced at Rs 69,999. For the prime day sale, the TV is available for Rs 64,999. The TV supports 4K along with HDR 10. For connectivity needs, the TV has 3 HDMI ports and 2 USB ports. The TV has a QLED display, a technology mostly found on Samsung TV panels and TCL TVs as well. The TV comes with a minimalistic remote control which also houses a dedicated voice control button. The TV runs on Android 7 out of the box with the Blaupunkt Hybrid Launcher. The QLED TV also boasts of built-in WiFi, a Dual Core A73 Processor, Mail 450 GPU. the TV is also a mere 7.9mm thick.

Customers can also download the “Blaupunkt TV Care” App on Android devices to address any queries they may have pertaining to the television. In the box along with the TV, consumers get the TV along with a wall mount kit, user manual, warranty card, remote control and batteries. The TV is available in 55-inch screen size only. There are no other screen size options available.

Blaupunkt entered the TV market back in September 2019. The company launched a total of eight televisions across its Family, Smart Sound, and the 4K UHD Series in India. The TVs that were launched back in September were initially unveiled at the IFA Berlin 2018. At the launch event, we had a chance to spend some time with the Blaupunkt 49-inch 4K UHD Smart TV, or the BLA49AU680 to be precise. The TV came with two remote controls in the box, ran on Android and boasted of a built-in soundbar to cater to the problem of lacklustre audio from the TV. You can check out our impressions of the TV here.