When you hear the name Blaupunkt, the first thing that comes to your mind is car audio, and rightfully so. The company has built a brand around audio devices and this is its first foray into the TV market in India. The company has targeted a wide gamut of TVs with its range and you can check out details of the available models here. We have spent a few hours with one specific model – the BLA49AU680 which is a 49-inch 4K TV from Blaupunkt. The TV boasts of dedicated soundbar that sits flush below the TV. Does the TV deliver great picture quality along with great sound?

When you talk about sound output from a TV around 40k, what you get are 2 speakers with either 8W or 10W of power and honestly, the content consumption experience especially when listening to audio isn’t great on these TVs. Sure, you can watch some soap operas and news without worrying, but you won’t get the bang you are looking for when watching action blockbusters. With the Blaupunkt 49-inch 4K UHD Smart TV, things change. 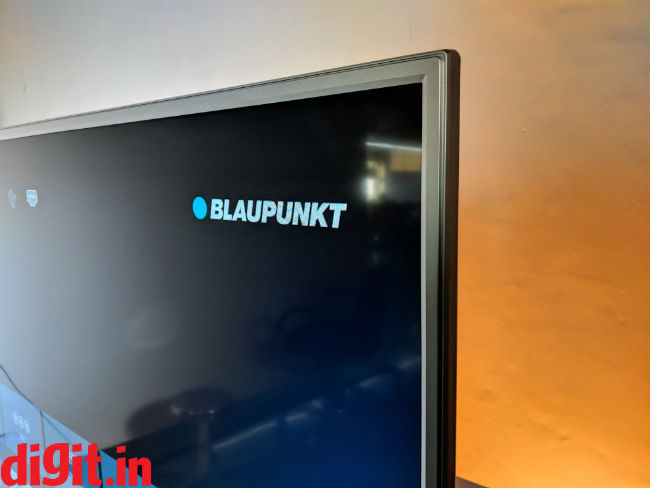 In the limited time we spent with the Blaupunkt 49-inch 4K UHD Smart TV BLA49AU680 we can tell you that the 60W soundbar does a fine job of defying the norm of bad audio from a TVs inbuilt speaker. We saw some content streamed via Netflix and Prime Video using their native app on the TV and even though the apps were mobile versions of the respective software, the audio sounded wholesome. We saw the sequence of Spider-Man Homecoming where the ship is destroyed and from the popping sound of Spider-Man replacing his web cartridges to the Vulture ripping the ship in half, all sounded good. We even raised the volume to about 75 and it filled our entire studio with sound. The same can be said about the church fight sequence from John Wick on Netflix. However, in the case of John Wick, the voice during conversations sounded a little muddled. For now, we are going to blame the mobile version of the apps on the TV for this and will run the same tests again when we have our trusted Xbox One X with us. 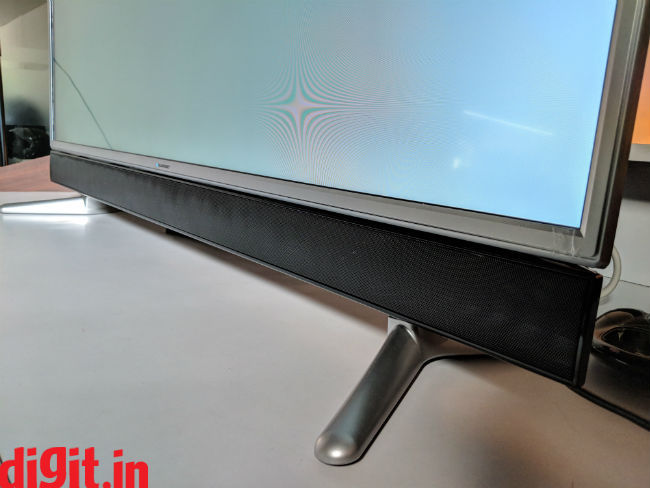 The only qualm I had with the sound was when playing the Cyberpunk 2077 E3 2018 trailer (we played the trailer through the built-in YouTube app). The audio from the trailer lacked bass and felt lacklustre overall. Once again, we will play the same content through another source to rule out the possibility of an app issue.

Speaking of apps, the TV runs on a skinned version of Android 5.1.1. This version of Android isn’t Android TV, so you can expect mobile versions of apps to run on the TV. This is a bummer as the apps can’t take advantage of the 4K screen on offer. Speaking of the UI a lot of elements such as the settings are reminiscent of the UI we have seen in the past on Thomson and Kodak TVs, however, there are some additions which are nice. To begin with, the UI has a nice grid layout with each line representing a feature. So, on the top you have your TV (analogue input) below which rests the input sources, apps, settings, so on and so forth. This is a nice layout ensuring you can get to where you want with easy visual cues. Below the settings, you have content listed from various TV channels and apps such as Hungama, Netflix, Hotstar and more. It is a nice layout and one that will help those looking for something to watch but don’t want to get into each service’s app. 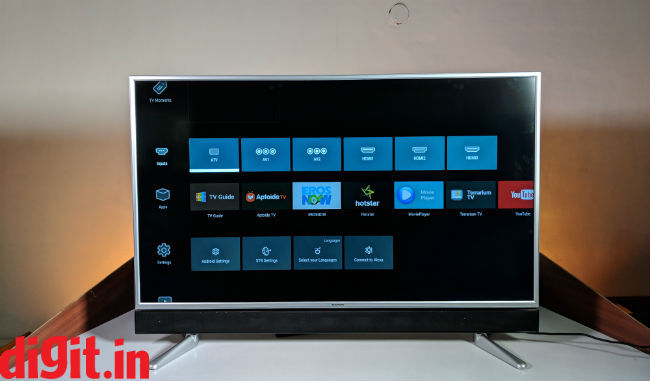 Speaking of the remote controls, we got two of them in the box. One is a traditional remote with the number pad, settings, menu, playback controls and more. It is sleek, slim with a sort of tapering design making it comfortable to hold. The buttons are rubbery and clicky which is nice. The other remote is minimalistic, quite reminiscent of the Xiaomi Mi TV remote cum Apple TV remote. This remote has a mouse functionality which lets you control a pointer on screen. This is quite essential for some apps as you will need to move the screen up and down like you would when navigating the app on a smartphone display. This motion remote has a matte textured finish to it and is light. It uses a USB dongle to communicate with the TV, so be prepared to lose out on one USB port to the dongle. 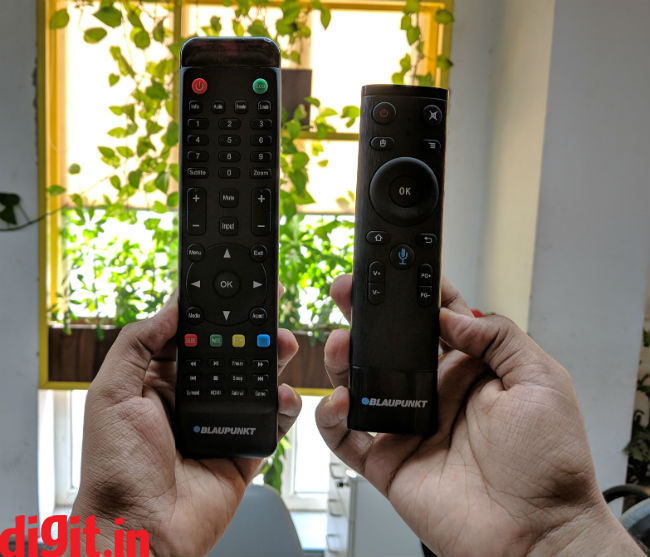 Speaking of ports, the TV has the standard array of 3 HDMI, 2 USB, headphones jack, coax audio and RCA inputs. The design of the TV is slightly thick and the presence of the soundbar is prominent below the TV. It looks like a separate unit mounted onto the TV and this is nice as the manufacturers weren’t limited to integrating the audio into the body of the TV.

Speaking of the panel, it is a 4K capable panel and we are yet to check the type and bit-rate of it. Its performance with the built-in apps is average at best, but then again, like we said, we need to test the display further to with better input sources. 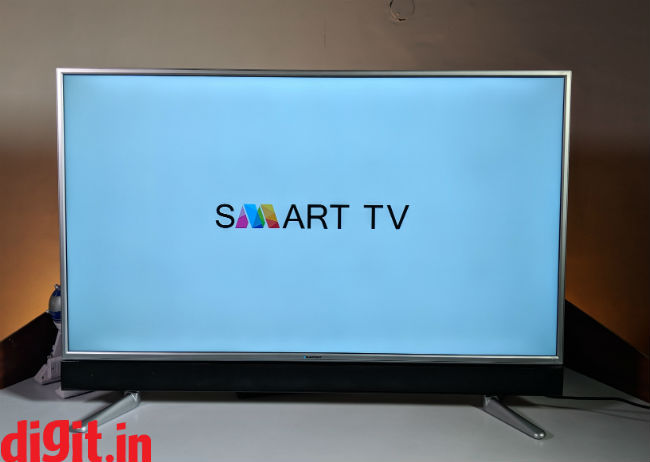 Overall, it is nice to see a company tackle the problem of sound in the 40K price bracket of TVs. Whether this TV becomes a fantastic performer is something we will tell you in our review. Our initial thoughts are that the sound output is good, display panel is ok and the UI, though visually rich lacks the ability to take advantage of a 4K screen. You have access to the Google Play Store along with the Aptoide app store, so you don’t really need to put in the effort of sideloading apps. 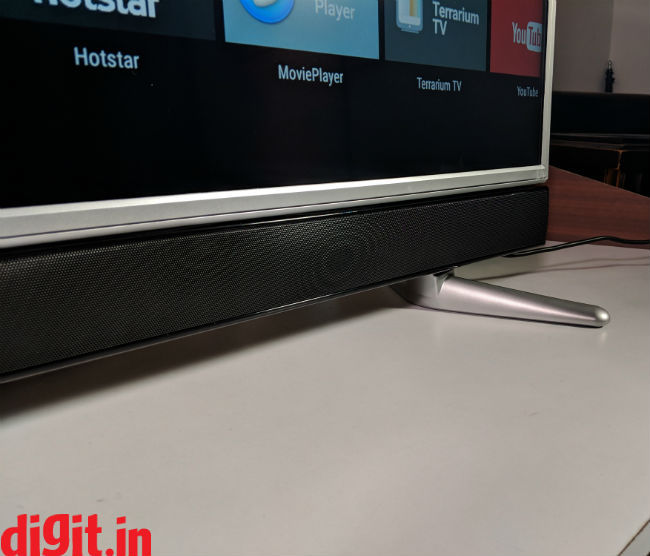 The remote control also boasts of voice functionality which, is a little limited. When it works, it works well, albeit a little slowly. You can say things like Switch to Star Plus HD and the UI will respond accordingly. You could say “show me movies of salman khan” and it will give you the appropriate list. However, saying “play stranger things” led to an error and saying “open Netflix” led to me being given recommendations from the Netflix app rather than launching the app.

Overall, the UI looks like a move in the right direction, but it will need refinements. Stay tuned for our in-depth review of the Blaupunkt 49-inch 4K UHD Smart TV BLA49AU680 coming soon.