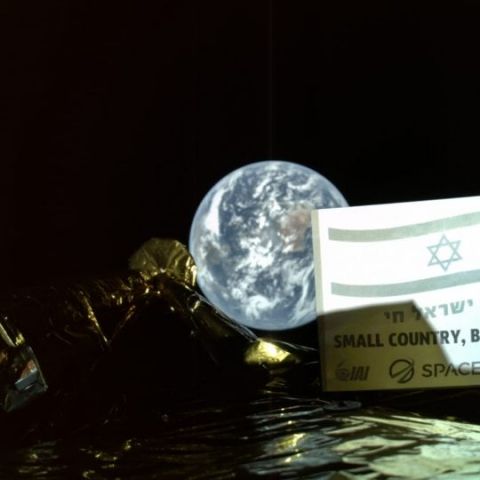 A collaborative mission executed by the state-owned Israel Aerospace Industries and Israeli NGO SpaceIL saw Israel's first lunar spacecraft 'Beresheet' take off from Cape Canaveral, Florida on February 22. Nearly two weeks and 37,600 kilometres later, the spacecraft has sent back an image of its feet and lunar plaque, along with the Earth in the background. Beresheet is currently on its way to the Moon. When the lander touches down on the lunar surface, it will perform a number of experiments including measuring the local magnetic field.

SpaceIL posted the selfie sent back by Beresheet on its Twitter account. The plaque seen in the image reads, "Am Yisrael Chai", which is Hebrew for "The nation of Israel lives", and "Small Country, Big Dreams." Beresheet, whose name translates to Genesis, took off on a SpaceX Falcon 9 rocket and will make Israel the fourth nation (and the first non-superpower nation) to land on the Moon after the US, Russia, and China. With the lunar landing, SpaceIL is hoping to create an Israeli "Apollo Effect" in an effort to inspire future generations of scientists in the nation to study science, technology, engineering and mathematics.

Along with the measuring equipment, the Beresheet lander carries memories from Israel, says an earlier Space.com report. It carries a digital "time capsule", which contains over thirty million pages of data about the Earth, including a full copy of Wikipedia in English, the Bible, drawings by children, memories of a Holocaust survivor, Israel's national anthem, songs in Hebrew, the Wayfarer's Prayer (a Jewish prayer for a safe journey), the Israeli flag, and a copy of the Israeli Declaration of Independence.

Israel's 585-kilogramme Beresheet lander is expected to touch down autonomously on the lunar surface by April 11. The spacecraft is currently orbiting the Earth in elliptical orbits and will travel 6.5 million kilometres in total, which is the longest distance travelled before to get to the Moon. Being the smallest spacecraft ever made for its weight, Beresheet will touch a maximum speed of 10 kilometres per second (36,000 kilometres per hour). Beresheet was developed and constructed at a relatively low cost of $100 million.