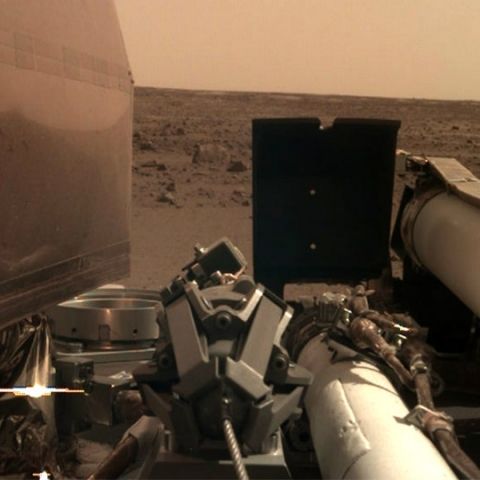 NASA’s InSight set a record for generating the most amount of solar power in a given day on the Red Planet.

It’s been only a week since NASA’s InSight landed on Mars and it’s already setting records. According to Space.com, the lander generated more electrical power in one day than any other previous Mars probe has in the past. More specifically, InSight generated 4,588 watt-hours on its first sol (Martian day), which is significantly more than the 2,806 watt-hours Curiosity generated during its stay on the Red Planet. InSight uses two solar arrays that are 7-feet wide each when opened. The panels provide 600 to 700 watts of on a clear day, which is enough to power a kitchen blender, says NASA. On days when the panels are covered with dust—a common occurrence on Mars—the panels manage to provide 200 to 300 watts.

“It is great to get our first 'off-world record' on our very first full day on Mars,” commented Tom Hoffman, InSight Project Manager at NASA's Jet Propulsion Laboratory in California. “But even better than the achievement of generating more electricity than any mission before us is what it represents for performing our upcoming engineering tasks,” he went on to say. “The 4,588 watt-hours we produced during sol 1 means we currently have more than enough juice to perform these tasks and move forward with our science mission.”

According to The Associated Press, three more Mars landers are expected to arrive on the planet by the time InSight is done with its mission in 2020: NASA is expected to send Mars 2020, which will hunt for rocks that may hold evidence of ancient microbial life and save them for an early 2030s’ return. The European Space Agency and Roscosmos are expected to send ExoMars jointly, which will also join the hunt for possible past life on Mars. You may remember that a spacecraft that was part of the ExoMars mission crash-landed on Mars back in 2016. Lastly, the United Arab Emirates also aims to send its first spacecraft to Mars by 2020. The orbiter is expected to be called Amal, which stands for hope in Arabic.

If you haven’t been following the news around NASA’s InSight, here’s what happened last week: the Mars rover took a fiery journey through Mars’ atmosphere and landed on the planet’s dusty, red surface on November 26. It then successfully extended its solar arrays and began communicating with Earth; it even sent back a ‘selfie’. In the coming months, InSight will dig the planet to study its interiors.