Will an AORUS NVIDIA GeForce RTX 30-series card and a G-SYNC monitor improve your gaming experience?

The Indian gaming landscape has seen a sea change over the past five years. With mobile internet penetration having broken world records and with every Tom, Dick and Harry owning a smartphone these days, it’s no wonder that mobile gaming took off faster than PC or console gaming. 94% of the gamers in India can be classified as Mobile Gamers, 9% are PC gamers and console gamers bring in the rear with 4%. Obviously, there’s a bit of overlap here. The interesting aspect is that a lot of the upcoming PC gamers are those upgrading from being just mobile gamers. When you realise that a gaming PC with a powerful NVIDIA RTX graphics card, a superb high-refresh rate monitor offers you a more enriching gaming experience, it’s but obvious to want to build a gaming PC for oneself.

And where there are more gamers, there are also more streamers, shoutcasters, memeing maestros and other forms of content creators. Some of these tasks can be easily done on a smartphone such as making memes. But for streamers and shoutcasters, a good PC that can run the game and handle the streaming software simultaneously, is of utmost importance. Playing on a PC that stutters while gaming is no fun, and trying to shoutcast for a game which is stuttering on your PC makes for an equally unpleasant experience. So the need for good hardware is accepted by all, gamers and streamers alike.

2020 was a huge year for gamers and content creators in India. If you were to sort out the list of top streamers across the globe by views, then 6 of the top 10 streamers in the world are from India. That’s how big the Indian gaming community is. Another interesting fact about these six streamers is that most of them were or are professional eSports gamers. Most of them started out in the midst of the PUBG craze but have since then upgraded to PC gaming.

Speaking of eSports, we’ve seen a lot of major events coming to India. 2019 alone saw not one but three major gaming tournaments of international repute held in India. The prize pool for eSports titles went up by 180% in 2019 and it’s only going to climb higher. So the Indian eSports community is growing at an exponential rate and more gamers are realising the importance of getting the right hardware for the video games that they play. They understand that a good PC with a powerful graphics card and processor coupled with the appropriate amount of memory is required to game properly. They understand that a powerful gaming PC needs to be paired with a capable gaming monitor that can render all the frames coming from the graphics card in time. They understand that a high refresh-rate monitor coupled with a gaming PC will give them the upper hand in an eSports title. Essentially, they understand that frames win games.

NVIDIA GEFORCE RTX graphics cards have several unique features that not only enhance the visual fidelity of video games but also reduce the overall system latency and make games feel more responsive. And you don’t need to be an eSports professional to realise how much latency matters to gamers. NVIDIA Reflex is one of the newest technologies to be introduced by NVIDIA for the benefit of gamers. Here’s how it helps.

NVIDIA Reflex to the rescue

This is where NVIDIA Reflex comes into the picture. NVIDIA Reflex is a collection of technologies which help gamers and game developers measure system latency and take appropriate actions to improve the same. Getting your hardware to talk to each other in the right fashion is NVIDIA Reflex’s job. Here are all the technologies within NVIDIA Reflex at a glance:

NVIDIA Reflex Low Latency Mode - Boosts responsiveness by getting the CPU and GPU to work in an optimal fashion so that the GPU does not have waste time while pushing out frames to the display.

Low Latency Boost - Overrides the power saving feature within the GPU to allow the GPU to run at higher clocks, especially with CPU-bound games.

Reflex Latency Analyzer Flash Indicator - A flashing box that can be placed anywhere on the screen. This box flashes in response to your mouse clicks and provides a clear and very visible indicator that can be used to measure latency.

How does NVIDIA Reflex help?

To understand this, we need to look at the entire process that each action has to undergo before you see the reaction within the game. It starts with the moment you press the left-click button on your mouse to the time your in-game character shoots their weapon.

End-to-End System Latency - This is the total time taken per frame from the very first input given via a keyboard or mouse to the final output seen on your monitor.

Peripheral Latency - Time delay resulting from the hardware and firmware within the mouse.

PC Latency - Time involved by all components of the PC to react to your action and then send out the proper response via the GPU.

Game Latency - Latency within the game engine when it updates positions of various animate and inanimate objects within the frame which is then sent to the graphics API runtime.

Render Latency - Once the graphics API receives the updates from the game engine, it will send the same into the GPU render queue. Render latency involves the delay within the render queue and the actual render process within the GPU.

Display Latency - The time taken when the GPU is feeding each ready frame to the display, line-by-line as per the refresh rate of the display. Which will then be processed by the monitor and then each pixel is activated to the corresponding value from the frame.

All of the above work together in a linear fashion with some amount of parallelism. To better visualise the same, we can take a look at the render pipeline of a typical game. Here we’re looking at four simultaneous frames of a video game being processed across different stages of the render pipeline.

It should be understood that not every frame requires a human input to be generated which is why even if you are not moving within a game, the entire game continues to run and the display continues to be updated.
The very first frame is ‘Frame 4’ followed by ‘Frame 3’, ‘Frame 2’ and ‘Frame 1’. Let’s look at the CPU, Render Queue and GPU timelines. We can see that there’s plenty of time delay between the processing of two subsequent frames at the CPU level which means that the CPU is making quick work of whatever frames are assigned to it. The CPU then puts frames that it is done processing into the render queue. The render queue then feeds the GPU. At both these stages, we see there’s no waiting time between two subsequent frames. This tells us that the workload is GPU bound i.e. the GPU is the bottleneck. And this is where NVIDIA Reflex comes into the picture.

NVIDIA Reflex empties the Render Queue and the game is able to time the CPU workload so that it keeps pace with the GPU. This way the CPU doesn’t run off ahead of the GPU. Another benefit of delaying the CPU work is that peripheral inputs can be sampled at the very last moment. So that leads to a reduction of peripheral latency as well. Overall, you experience very low latency and that improves your gameplay experience. Here are some benchmark numbers from NVIDIA to showcase the impact of NVIDIA Relfex. 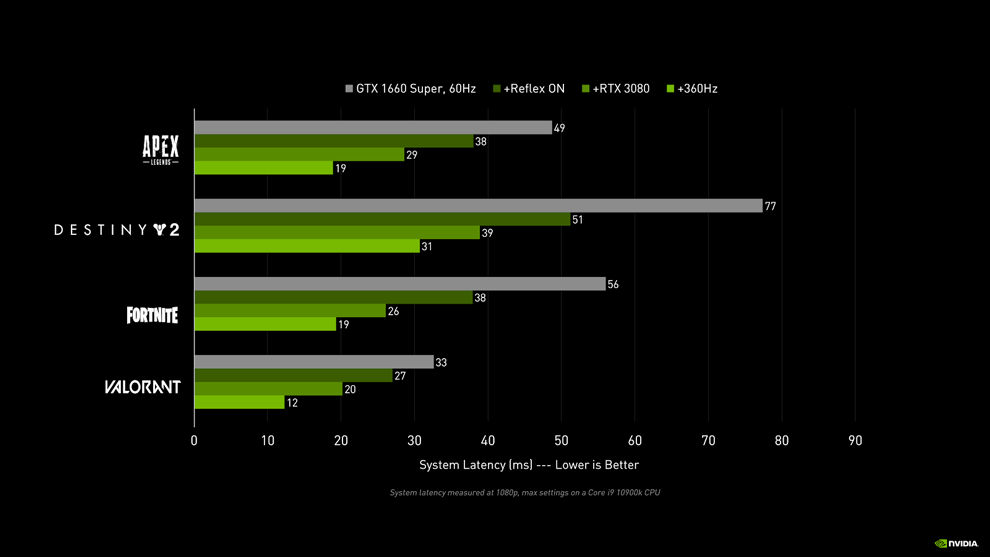 It can be seen that the impact varies across different video games and depends on how the game developers implement NVIDIA Reflex SDK. Certain games such as Valorant show significant improvement that could aid eSports professionals to gain an advantage over the competition.

Now if you were to take the enormous latency reduction made possible with NVIDIA REFLEX and pair that with a high-refresh rate monitor, then you can get even better latency reduction. Here’s a simple graph showcasing the amount of latency reduction you can get by pairing an NVIDIA® GeForce® RTX graphics card that’s capable of dishing out high framerates in modern games, with a high refresh-rate NVIDIA G-SYNC monitor. You stand to reduce latency by up to 60%. 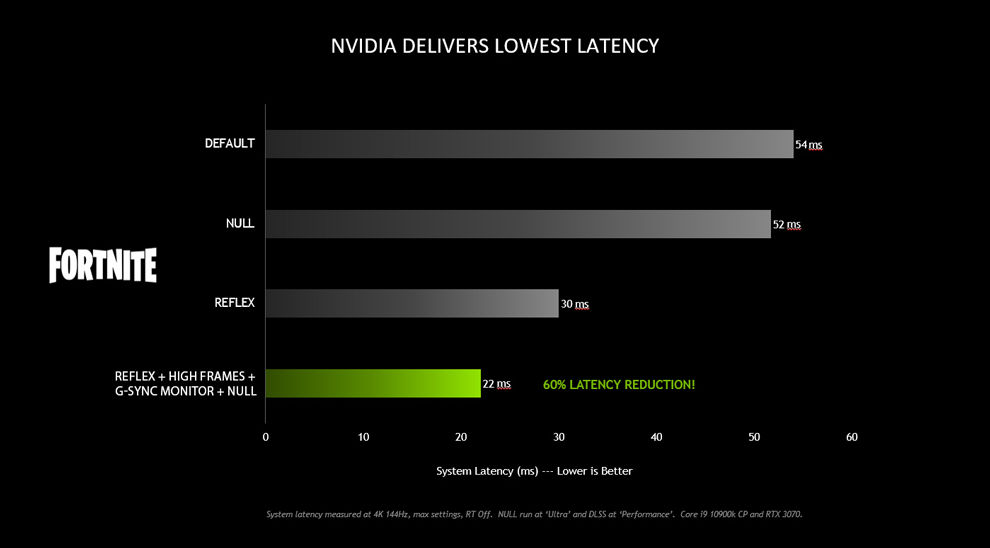 We understand that some concepts are better explained with a video, so here’s a video to help you understand how NVIDIA Reflex works with a practical example.

Now that you’ve understood how NVIDIA Reflex helps gamers, let’s look at where you can upgrade your gaming experience.

You now know how a PC powered by the latest NVIDIA® GeForce® RTX graphics card can really improve your overall gaming experience. However, the graphics card is but one of the many components that make up a gaming PC. Aside from the graphics card, you also have the processor, motherboard, RAM, storage, power supply and cooling. Sure you can head to any store and grab one of each and there’s a good chance that you’ll end up with a functional PC but is it the most optimal way of going about it? Will such a PC play the games that you want to play at the right resolution and provide enough FPS for a smooth gaming experience? Will the cooling be sufficient to ensure none of the components keep hitting their thermal limits? Is the monitor good enough to make the most of the graphics card’s prowess? There are many such concerns that need to be addressed when you’re considering building a gaming PC. An easy way to tackle this concern is by simply getting a gaming PC that has been configured by experts who will pick the right hardware as per your requirements. They’ll even assemble the entire system and ensure that all the hardware is functioning properly.

#UpgradeWithAorus is an initiative conceived by GIGABYTE to help gamers find the right hardware. Under the #UpgradeWithAorus initiative, GIGABYTE has partnered with several well-known PC hardware stores across India and launched an promotion campaign – ‘AORUS Gamer Days’ to provide gamers with some exiting exclusive bundle offers where gamers can get Paytm vouchers up to INR 10,000.  One can avail these offers here.

But what if you are a streamer? You need a much beefier CPU to handle streaming and gaming at the same time and having a powerful NVIDIA® GeForce® RTX GPU to make use of NVENC for encoding your streams will make your streams seem even better. Worry not, AORUS Gamer Days campaign has some offers for you as well.

GIGABYTE AORUS has worked with streamers and gaming influencers in the recent past where they have created some unique builds with NVIDIA® GeForce® RTX GPUs. You can check out the latest Creator Build they had build for Techno Gamer - https://upgradewithaorus.com/streamer-build/streamer.php?s=techno.

No matter which popular game you’re into, there will always be a #UpgradeWithAorus build powered by the latest NVIDIA® GeForce® RTX graphics card to provide you the best possible experience. Over the next couple of weeks, as part of the AORUS Gamer Days, you can reach out to any of the following online stores to grab an #UpgradeWithAorus exclusive bundle and get cashbacks. 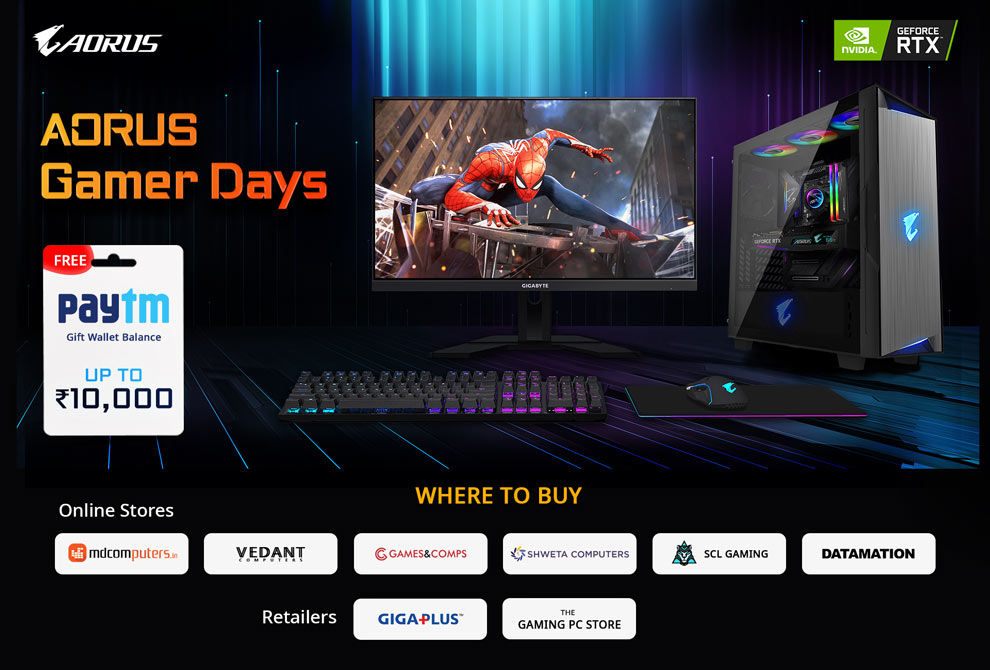