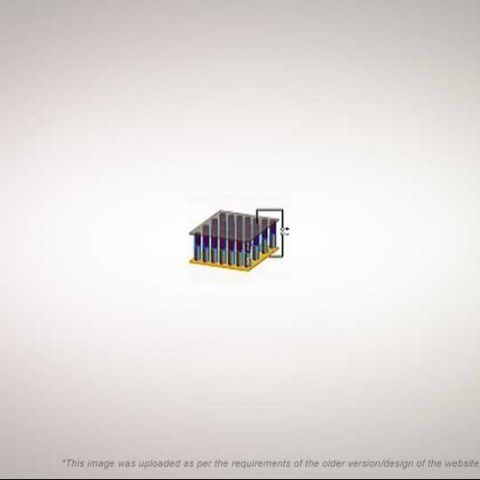 An innumerable number of devices run on lithium-ion batteries. Thanks to Rice University researchers, their size is no longer a factor (at least for mobile devices). Prof Pulickel Ajayan and his colleagues claim to have succeeded in building a complete lithium ion energy storage device in a single nanowire. The researchers say their batteries are as small as devices can get, and hence immensely valuable as rechargeable power sources for the latest nanoelectronics.

The researchers tested two versions of their battery/supercapacitor hybrid. The first version resembles a sandwich comprised of nickel/tin anode, polyethylene oxide (PEO) electrolyte and polyaniline cathode layers. This setup proved that lithium ions could efficiently traverse the anode to the electrolyte, and then make their way back to the supercapacitor-like cathode. The cathode, is called a supercapacitor because of its ability to discharge and charge quickly, using ions in bulk.

In the second version, the same capabilities were integrated into a single nanowire. Researchers set up centimeter-scale arrays, which included a number of nanowire devices with each measuring 150nm in width. While the researchers claimed to have created first 3D nanobatteries last December, it has taken them this long in making single nanowire devices, circumventing the electrode problem they'd been facing by placing the cathode inside the nanowire, using PEO as the gel-like electrolyte that stores lithium ions and also serves as an electrical insulator between nanowires in an array.The team chose polyaniline (PANI) as the cathode, an easily synthesizeable polymer, and drop-coated the widened alumina pores, the insides, the electrodes and leaves tubes with PEO. The circuit is completed with an aluminum current collector placed on top of the array

"The idea here is to fabricate nanowire energy storage devices with ultrathin separation between the electrodes," said Arava Leela Mohana Reddy, a research scientist at Rice and co-author of the paper. "This affects the electrochemical behavior of the device. Our devices could be a very useful tool to probe nanoscale phenomenon."

The experimental batteries are nearly 50 microns tall, which is equal to the diameter of a human hair. The researchers said that they are working on ways to boost the ability of the batteries to charge and discharge. The batteries presently drop off after nearly 20 cycles.

Speaking about the time it will take such batteries to actually hit the streets, Sanketh Gowda, the paper's lead author, said: "There's a lot to be done to optimize the devices in terms of performance. Optimization of the polymer separator and its thickness and an exploration of different electrode systems could lead to improvements."