Intel launches Core i5, Core i7 and Xeon processors in India

Intel launches Core i5, Core i7 and Xeon processors in India
Intel Corporation introduced several high-performance desktop and server processors today, bringing the next level of integration and intelligence to computers. The new Intel Core i5 processor series, two new Intel Core i7 processors and the Intel Xeon processor 3400 series bring Intel’s latest Nehalem microarchitecture to mainstream desktop and entry server markets.
Commenting on the occasion Prakash Bagri, Director-Marketing, Intel South Asia, said: “With the launch of the new Core i5 and Core i7 series of processors, we are extending the path-breaking Nehalem microarchitecture for mainstream PC users. This is coupled with revolutionary changes in chipset design delivering great new levels of performance and scalability. Ultimately it allows discerning users to get previously unheard levels of intelligent performance in their desktop PCs and experience smooth and more realistic gaming and multitasking.”
New Intel Core Processors for Consumers
Formerly codenamed ‘Lynnfield’, these new chips are based on Intel’s award-winning Nehalem microarchitecture and are designed for consumers who need top-notch performance for digital media, productivity, gaming and other demanding applications. These processors, along with the new Intel P55 Express Chipset, are available today.
All processors are lead- and halogen-free and feature Intel Exclusive Turbo Boost Technology. The top-of-the-line Core i7 processors also support Intel Hyper-Threading Technology. Combined, these features give computer users absolute “intelligent” performance when necessary and optimum power-efficiency when the computer is lightly loaded.
Computers Just Got Smaller
The new chipset brings the most revolutionary design changes since the invention of the PCI bus in the early 1990s and sets the stage for Intel’s forthcoming 2010 compute platform. The Intel P55 Express Chipset will be the baseline building block component for motherboards worldwide, delivering great new levels of performance and scalability for everyone from the retail buyer to the technically savvy do-it-yourselfer.
The new Core i7 and i5 processors are the first Intel processors to integrate both a 16-lane PCI Express 2 graphics port and two-channel memory controller, enabling all input/output and manageability functions to be handled by the single-chip Intel P55 Express Chipset. Previous Intel chipsets required two separate chips. A new Direct Media Interface (DMI) connects between the processor and chipset. The chipset supports 8 PCI Express 2.0 x1 Ports (2.5GT/s) for flexible device support. Dual graphics cards are supported in a “2x8” configuration. The chipset also supports 6 SATA 3 Gb/s Ports with Intel Matrix Storage Technology providing RAID levels 0/1/5/10. Up to 14 USB 2.0 Ports can be supported with the chipset’s integrated USB 2.0 Rate Matching Hub, along with Intel High Definition Audio for premium digital sound. The new processors are the first to be supported by the new Land Grid Array (LGA) 1156 package and socket technology.
Intel announces Uber Gamer Championship in association with Zapak
Intel also announced the Uber Gamer Championship in association with Zapak to mark the launch of the new Core  i5 and i7 processors. The championship – culminating on the 11th of September – will see India’s best gamers play knock out games of NFS Most Wanted, Crysis and FIFA 09. For more details on the championship please visit www.ubergamer2009.com
“Zapak is proud to be associated with Intel in the launch of the new Intel Core i5 processors,” said Rohit Sharma, Chief Operating Officer, Zapak. “The Uber Gaming Championship currently being held at our exclusive gamplexes gives the gamers a chance to compete on the new Intel Corei5 and i7 processor based gaming PCs and experience previously unfathomable levels of gaming. The new Core processors will help Zapak in its endeavour to provide gamers with the best gaming experience possible.”
Better Entry Servers
Small businesses requiring 24/7 operation and educators now have more reasons than ever to buy a purpose-built server with Intel’s new Xeon processors and Intel 3400 and 3420 chipsets. These new products improve small business productivity by running email, file, print and dynamic Web serving tasks more efficiently. They also improve education by enabling dependable classroom collaboration and making school administrative services more productive. For more information on these products, please visit www.intel.com/xeon.
Here are the product details of the new processors: 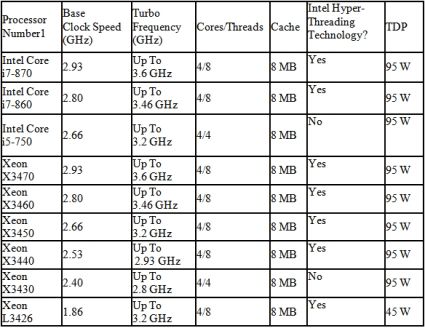 While the prices for the new processors have not been released yet, we will update the same as soon as we get them. For an estimate based on the US prices, check the chart at the bottom of this link.