Intel calls the DC P4800X the world’s most responsive drive 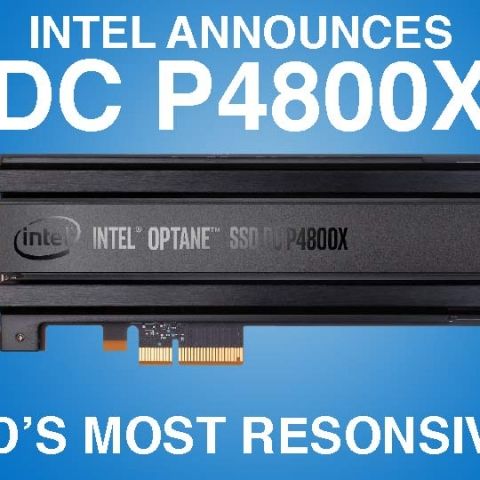 We’ve been hearing quite a lot of chatter about the new non-volatile memory being developed by Intel and Micron together – 3D XPoint. And then about a new range of storage devices being released under the brand name Optane. So far, we’ve seen plenty of motherboards with shiny new “Optane Memory Ready” badges. In fact, one of the primary reasons for anyone thinking of upgrading to Kaby Lake CPUs is the fact that a 7th Gen Kaby Lake CPU paired with the new 200-series chipset is required for Optane memory support. However, the hype train hasn’t been that strong for 3D XPoint SSDs which makes us wonder why that’s so. Anyways, today’s announcement might clear up those doubts as Intel brings out the world’s most responsive SSD – the DC P4800X for $1520.

Going by the model number, you should have guessed that the DC P4800X is an enterprise grade SSD using the new 3D XPoint technology. This 3D XPoint SSD is a single slot, full height SKU with a huge heatsink on the front. As can be seen from the image, it uses a PCIe x4 slot to interface.

What is 3D Xpoint?

3D XPoint is a new non-volatile memory technology that is quite fast, as fast as most of today’s SSDs but has better latency than existing SSDs. Micron, who has been developing the technology along with Intel has claimed that 3D XPoint technology will be available at approximately half the price of DRAM but 4-to-5 times the cost of NAND flash. And that it has about a 1000 times the speed and endurance of existing NAND technologies.

Traditionally, memory technology has individual cells which store data and each cell is controlled by transistors which either act as gates for data or to locate which cell is to be operated upon. In case of 3D XPoint SSDs, the individual memory cells do not require a transistor which means that the packing density will be approximately 4 times as that of DRAM. This does not mean that there are no transistors at all, obviously there are transistors to address the columns and rows. It’s just that 3D XPoint comes with fewer transistors and hance, the higher packing density.

Intel will be selling 3D XPoint enabled hardware under the Optane brand. This will include not just the storage medium like SSDs which are based on the 3D XPoint technology but there will also be other storage medium in the coming months. Intel’s own site lists Optane based M.2 SSDs, consumer grade PCIe SSDs and the DC P4800X enterprise grade SSD that was revealed today.

Needless to say, Intel is quite gung-ho about Optane SSDs and the internal benchmarks they shared with us tell us why. For starters, Intel says that the DC P4800X is up to 10x faster at random read operations and up to 3x faster in random write operations. Since the DC P4800X SSD is built for the enterprise segment, its ability to withstand high load scenarios is more important compared to other metrics. And in this regards, the DC P4800X is reportedly up to 35 times faster under 600MB/s write pressure and that goes down to 12.5 when the load conditions ease up to 200MB/s. 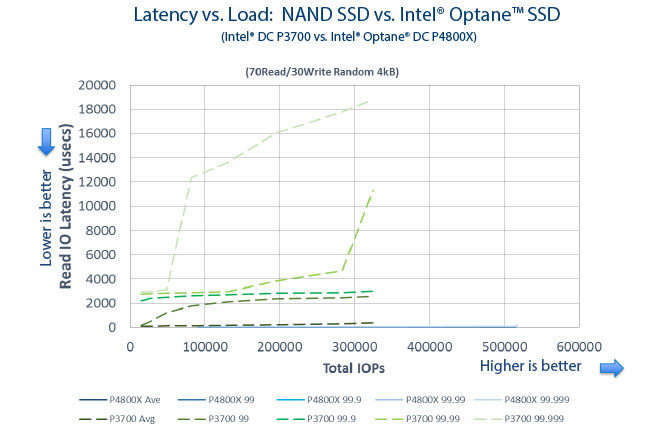 Intel will be bringing quite a few SKUs under the Optane brand featuring both U.2 and PCIe interfaces. The drives will be available in three capacities – 375 GB, 750 GB and 1.5 TB. However, only the PCIe SKU of 375 GB will be available first. The other SKUs will enter the retail market much later in the second half of 2017. The 375 GB PCIe DC P4800X will be priced at $1520 which works out to Rs.1,00,000. Now that’s a crazy expensive SSD and we’d predicted the same back when we started hearing about it’s capabilities. As long as you have a 7th Gen Intel Core or Xeon E3 v6 processor along with either an Intel 200 series or 100 (HM175, QM175, or CM238) chipset and the required M.2 or U.2 or PCIe x4 slot, you should be able to run Optane SSDs. Oh, and you'll also need a lakh rupees to buy one.