Days after teasers on social media, Xiaomi today finally unveiled its latest smartphone – the Xiaomi Mi 4i. The new smartphone is priced at Rs. 12,999, goes on sale on Flipkart on April 30, while registrations tonite at 8pm. The phone will available across Xiaomi channels later.

The company also announced Xiaomi Mi Band is coming to India soon. The Mi Band will be available exclusively on http://Mi.com  for Rs. 999. The Mi Band has a battery life of 30 days. The Xiaomi Mi 4i has a polycarbonate body and 5-inch full HD display with 441 ppi (fully laminated OGS). It runs Android Lollipop with the new MiUI 6, which comes with a range of India-centric features. The MIUI supports six Hindi languages - Hindi, Bengali, Tamil, Telugu, Kannada and Malayalam. It is powered by second gen Snapdragon 615 octa-core 64-bit processor along with 2GB of RAM. It comes with 13MP rear camera with two tone flash and 5MP front-facing cameras.  The phone is powered by 3120mAh battery, which the company says will last 1.5 days. Connectivity options include dual-SIM, 4G, 3G, 2G (on both SIM slots), Wi-Fi, Bluetooth 4.1 and USB. 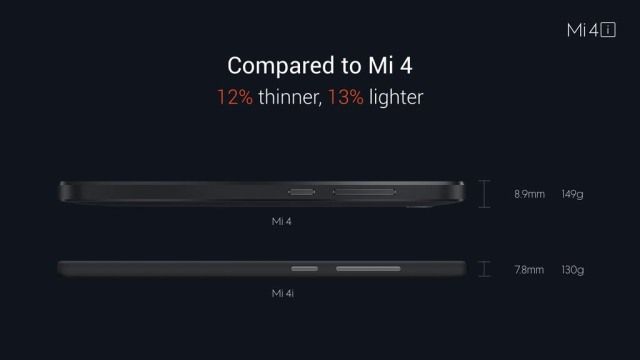 Xiaomi's new smartphone will be competing against Asus' newly launched Zenfone 2 smartphone. One of the important takeaways from today's event is Xiaomi's focus for the Indian market. It's notable the company, also known as China's Apple, chose India for its global launch. Apart from expanding its online presence (tie ups with Amazon and Snapdeal), the company also intends to increase offline presence in the country.

What do you think about Xiaomi's new smartphone? Let us know your views in the comments section below: