Google Play Services recently updated its list of supported devices that was first spotted by the folks over at XDA. The listing reveals Xiaomi’s plans to launch the Redmi K30 Pro as Poco F2 Pro in regions outside of China. However, the report also tries to connect the dots by decoding the model numbers corresponding to the entries.

The Redmi K30 Pro goes by the model number “lmi” and in two out of the three listings the K30 Pro seems to be rebranded as the Poco F2 Pro. Another entry that goes by “lmiinpro” has the words “in” which is the country code for India but could be marketed as the Redmi K30 Pro Zoom Edition and not Poco F2 Pro. 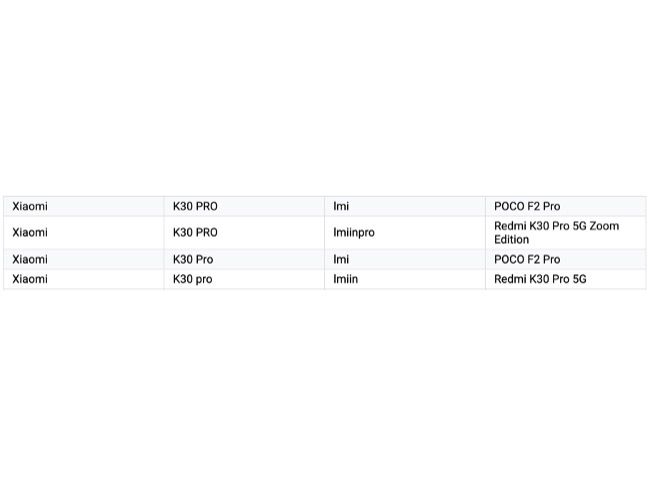 As to why Xiaomi won’t bring the rebranded version of Redmi K30 Pro in India as the Poco F2 Pro isn’t known at the moment. However, C Manmohan, Poco India GM has previously stated that the company isn’t looking to rebrand an existing phone as the Poco F2 and squashed any rumours suggesting the Redmi K30 Pro be released as Poco F2 in India.

Having said that, the latest piece of information coming from the listing does indicate that India will be getting the Redmi K30 Pro Zoom Edition.

Xiaomi Redmi K30 Pro Zoom Edition features a 6.67-inch Full HD+ (2400 x 1080 pixels) resolution display that uses an AMOLED panel coated by a layer of Corning’s Gorilla Glass 5. The display doesn’t have a notch cut out for front-facing camera as it utilizes the pop-up camera mechanism.

The phone is powered by Qualcomm Snapdragon 865 chipset with 5G support and an octa-core CPU running on Android 10-based MIUI 11. This is paired with upto 12GB RAM and 512GB UFS 3.1 storage options to choose from.

The Redmi K30 Pro Zoom has a quad-camera setup that consists of a primary 64MP sensor, an 8MP telephoto lens with 3x optical zoom, a 13MP ultra-wide-angle camera and a 2MP depth sensor. The rear camera setup can record upto 8K UHD videos at upto 30fps and 4K UHD clips at upto 60fps supported by EIS and OIS.

For the front-facing camera, the phone makes use of a pop-up mechanism that houses a 20MP selfie camera.

It packs in a 4,700mAh battery that supports 33W fast charging out-of-the-box that the company claims can go from 0-100% in just around an hour.