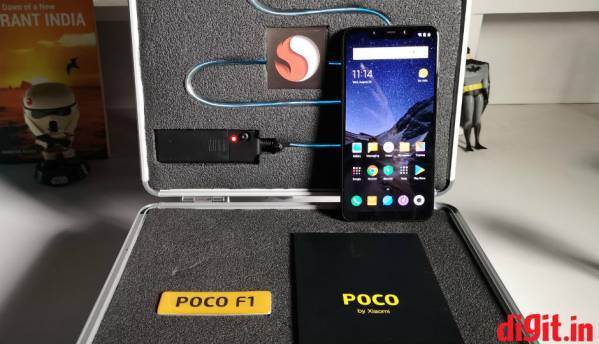 Some Xiaomi Poco F1 users are reportedly getting the notification to update their units to MIUI 10, which is based on Android 9 Pie.

Xiaomi recently started rolling out a new MIUI beta update for the Poco F1, which updated the phone with a Super Slo-mo mode as well as a Super Low-Light mode. The Poco F1 is now reportedly receiving the stable MIUI 10 update based on Android Pie as some users are receiving the updated on their phones. Of the two major OS updates the phone is slated to receive, this is the first one. XDA Developers has also now posted a link on its platforms to directly download the new Android 9 Pie based MIUI 10 update, which can be flashed in case one cannot wait to receive it via the official OTA route.

The new MIUI update is said to weigh 1.7GB in size and its version is updated to 10.1.3.0. The beta version MIUI 10.8.12.4 added 960fps slo-mo recording and Super Low-Light mode to the Poco F1 and the new stable version is expected to further refine these features. The Poco F1 was originally launched in August this year and went up against the OnePlus 6 as an affordable phone with flagship specs. The device comes in multiple variants and starts at Rs 20,999. However, the company recently announced a Rs 1,000 off on all of its variants and it will now be available starting at Rs 19,999.

In terms of specifications, the Poco F1 runs on the Qualcomm Snapdragon 845 SoC and comes with liquid cooling. It sports a ‘notched’ 6.18-inch Full HD+ display with a 19:9 display aspect ratio. It comes in four variants and its base variant comes with 6GB RAM and 64GB of storage, there’s another 6GB RAM version, but with 128GB of storage. The phone’s top-end variant features 8GB RAM with 256GB storage and its Armoured Edition also offers 8GB RAM and 256GB storage, but sports a differently designed rear panel. At the back of the phone is a dual camera setup with a 12MP + 5MP configuration. At the front is a 20MP unit. The Poco F1 sports a 4000mAh battery, with QuickCharge 3.0 technology.

You can read our review of the Poco F1 smartphone here.