The offline supermarket chain, Big Bazaar will offer both, the Redmi 4 and Redmi Note 4 at a special price. Xiaomi is betting on Big Bazaar’s 240+ stores to expand and strengthen its offline presence in India. 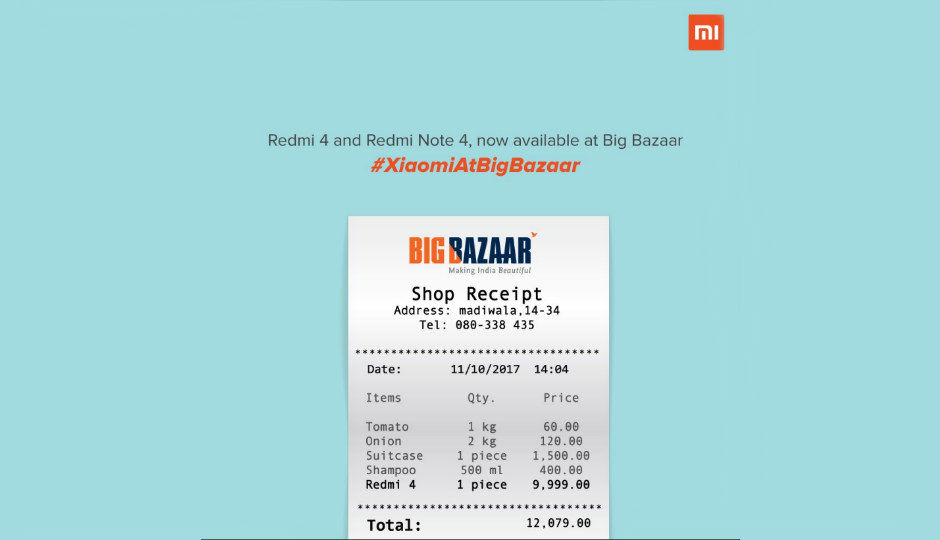 After claiming to have shipped about 10 million smartphones in the month of September, Xiaomi is now planning to boost its smartphone sales offline by partnering up with Big Bazaar supermarket stores. Big Bazaar has over 240 retail stores spread across the country and Xiaomi is offering the Xiaomi Redmi 4 and the Redmi Note 4 offline with this partnership.

Manu Kumar Jain, VP of Xiaomi India tweeted the information yesterday and revealed that the company was in talks with Big Bazaar for some time now. He tweeted a picture of him alongside Kishore Biyani, Founder and group CEO of future group that owns Big Bazaar.

Mi Fans can buy @Xiaomi phones at a special prices at @BigBazaar stores, plus No Cost EMI offers, & offers on all @ICICIBank cards. (3/3) pic.twitter.com/zwJO7NWXfe

Jain said in his tweet, “No other brand has ever sold phones at a supermarket chain! This journey when I first met Mr Kishore Biyani few months ago.” He also said that consumers can buy the smartphones at a special price at Big Bazaar stores. However, the special price hasn’t been revealed yet. Buyers will also get a no-cost EMI option and special offers on using ICICI bank cards.