The smartphone is rumoured to sport a 5.99-inch bezel-less display with a 95% screen-to-body ratio and come with dual rear cameras. Xiaomi is expected to unveil its Mi Mix 2S, the successor to Mi Mix 2 at the Mobile World Congress 2018. However, an alleged official poster of the smartphone has surfaced on Weibo ahead of the launch, which reveals its design alongside some specifications of the rumoured device. The leaked poster shows an almost bezel-less Mi Mix 2S with a small notch on the top-right corner, which houses a front-facing camera.

If the poster is to be believed, the smartphone will feature a 5.99-inch bezel-less display with a 95% screen-to-body ratio. Its predecessor, the Mi Mix 2 (review), sported the same display size but with a 91.3% screen-to-body ratio. The leaked poster also reveals that the Mi Mix 2S could be powered by Qualcomm’s latest Snapdragon 845 platform and 8GB RAM coupled with 256GB internal storage. This could turn out to be true as Xiaomi has already announced that their upcoming flagship smartphone would be equipped with the Snapdragon 845 and the smartphone was recently spotted on AnTuTu as well, sporting the codename “Polaris”. It scored 270,461 on the performance tests, demonstrating the prowess of the Snapdragon 845 chipset. 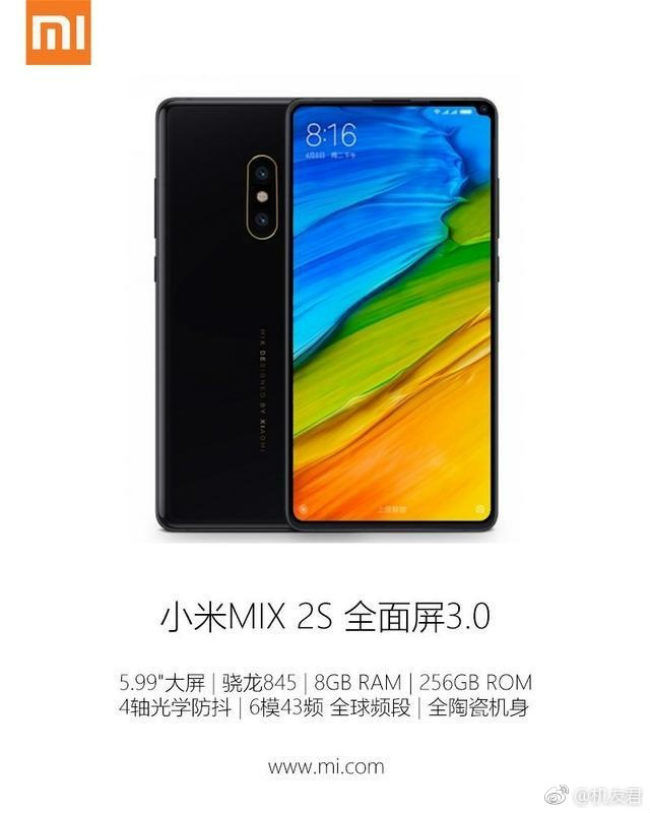 The Mi Mix 2S is seen featuring vertical dual rear cameras and as per the poster, it will come with four-axis optical image stabilization. It seems that the device skips on a fingerprint sensor as it can’t be seen on the rear and rumours suggest that the smartphone could sport an under-display fingerprint reader along with facial recognition feature, akin to the iPhone X.

Xiaomi was earlier expected to launch the Mi 7 at MWC 2018. However, a recent report suggests that the company might not do so, in order to avoid their launch event clashing with Samsung who will be unveiling its flagship Galaxy S9 and S9+ smartphones. As per another separate report, Xiaomi could debut the the Surge S2 chipset and the Mi Mix 2s instead.