Xiaomi Mi Mix 2, the successor to company's Mi Mix bezel-less smartphone, has appeared in benchmark listing revealing key specifications. The handset has been part of several leaks and rumours since April. and the device was even listed on GearBest highlighting some key specifications.

Now, the upcoming Mi Mix 2 has surfaced on GeekBench confirming some of its specifications. The handset will be powered by Qualcomm's Snapdragon 835 platform, coupled with 6GB RAM. The Snapdragon 835 platform seems to be clocked at 1.9GHz, and has managed to score 1929 in single-core, and 6431 in multi-core benchmark testing. The listing also confirms that it runs Android 7.1.1 Nougat, which could be based on the new MIUI 9 ROM based on Nougat that Xiaomi detailed a few days back. 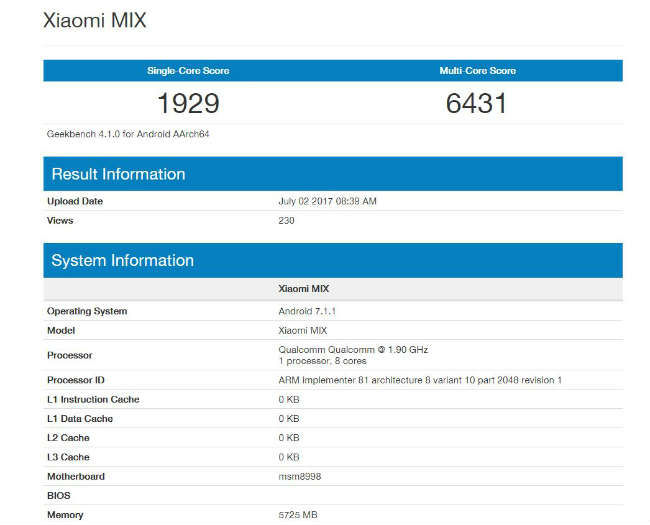 Other rumoured specifications for the Mi Mix 2 include a 6.4-inch AMOLED display with a resolution of 2560 x 1440 pixels. The handset is said to arrive in 128GB and 256GB storage options and offer a combination of 19MP rear and a 13MP front cameras. Rumours also hint at a beefy 4500mAh battery.

Xiaomi Mi Mix was announced last year in November with a screen-to-body ratio of nearly 84 percent. The handset was designed by the Chinese smartphone maker in collaboration with designer Philippe Stark. The duo and are collaborating again for the next generation handset. The Mi Mix was made available only in Xiaomi's home market and was even rumoured to launch in India, but never made it here. The smartphone received critical acclaim for its design and with the Mi Mix 2, we can only hope Xiaomi makes it available across all markets.