Chinese tech giant Xiaomi has revealed that the Android 6.0 Marshmallow update for the Xiaomi Mi4, Mi Note and Mi 3 is in its final stage of testing. The announcement of the update was made by Xiaomi’s MIUI operations manager on Weibo. A screenshot posted by him of the update reveals that it is 518MB in size, but won't bring a new iteration of the MIUI interface, meaning that the version of the MiUI overlaying the OS will be MIUI 7. It should be noted that the update is in Beta, and hence, may be a bit buggy. The final version of the update is expected to roll out in a few months.

Xiaomi had revealed earlier this month that the Mi4 and the Mi Note would receive the Android 6.0 update, so the news has caught us by surprise. 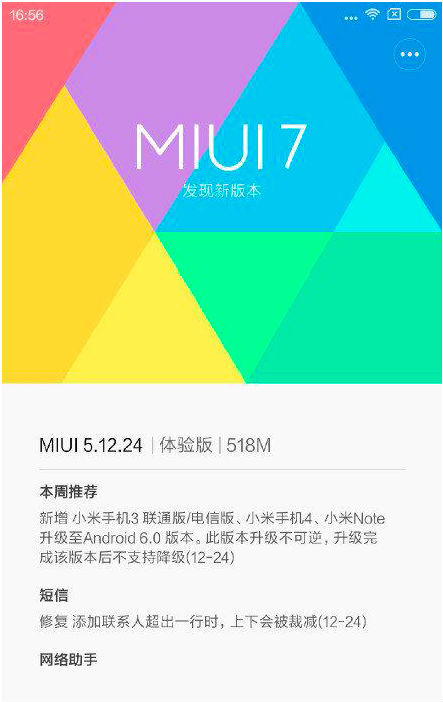 Android Marshmallow was launched in October 2015 for the masses, and those with a Nexus smartphone were the first to get it. If you do not have a Nexus device, and are wondering when your smartphone will receive the update, here is a list of all the smartphones scheduled to get the Android 6.0 update. Among these, Android One smartphones and the Honor 7 are some of the devices that are getting the Marshmallow update in India.