Fresh details shared by Xiaomi on Weibo claim that the Mi 8 will be the best camera smartphone from the company. 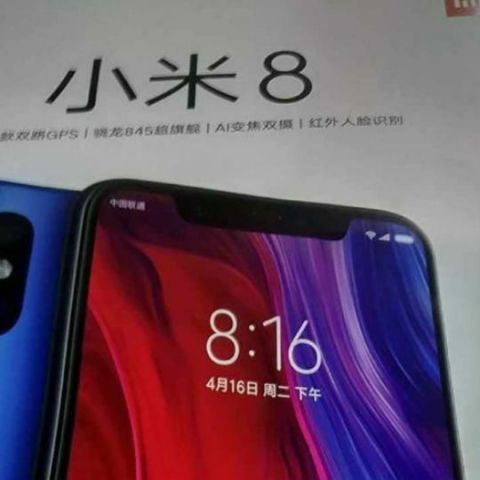 Xiaomi has teased its upcoming Mi 8 flagship smartphone on Chinese social media platform Weibo and the latest teaser confirms that it will be the best camera smartphone from the company till date. In the teaser (via gizmochina) Xiaomi has claimed that the Mi 8 will replace its Mi Mix 2s to become the best smartphone camera offering from the company. The text on the weibo post shared by Xiaomi says that the Mi Mix 2s is Xiaomi’s best camera phone, but only till the Mi 8 arrives.

The Xiaomi Mi 8 is expected to house a vertical dual rear camera setup which looks pretty similar to that of the Mix Mix 2s. The Mi Mix 2s sports a standard 12-megapixel wide-angle and another 12-megapixel telephoto lens. There is a 1/2.55 inch sensor underneath the wide-angle sensor with 1.4um sized large pixels while and f/1.8 aperture, while the second telephoto lens houses a 1/2.9-inch sensor with an even larger 1.0um sized pixels and f/2.4 aperture. At the front, the Mi Mix 2s comes with a 5MP front camera, placed at the bottom of the device.

The Mi 8, on the other hand, is expected to feature 20MP + 16MP rear cameras with f/1.7 and f/2.0 aperture lenses respectively, and on the front, a 16MP sensor with an f/2.0 aperture lens. It is also said to be the first Android smartphone to house 3D Facial Recognition technology, the same as Apple’s iPhone X. A recent alleged leak of a Mi 8 retail box confirmed that the device will feature a notch in the front to house the new depth sensing modules for 3D Facial Recognition. The supposed retail box also confirmed a Blue colour variant of the Mi 8, along with the fact that it will run on the Qualcomm Snapdragon 845 flagship SoC.

In the battery department, the Xiaomi Mi 8 is expected to feature a 4,000 mAh power pack and Qualcomm has confirmed that the device will get Quick Charge 4.0+. While Qualcomm has listed the phone on its Quick Charge 4.0+ page confirming the inclusion of the technology, a recent FCC listing also confirmed that the Mi 8 will come with support for 5V/3A, 9V/2A, 12V/1.5A quick charge protocols (via gsmarena).

The list of exciting features does not end there with the Mi 8. The phone is also expected to bring an under-display fingerprint scanner and a translucent back which will give users a view of its internals. The Xiaomi Mi 8 is set to launch on May 31 in China and we might also see a Special Edition of the phone called the Mi 8 SE launch at the event.