Redmi has announced the Redmi K20 Pro in India at a starting price of Rs 27,999. 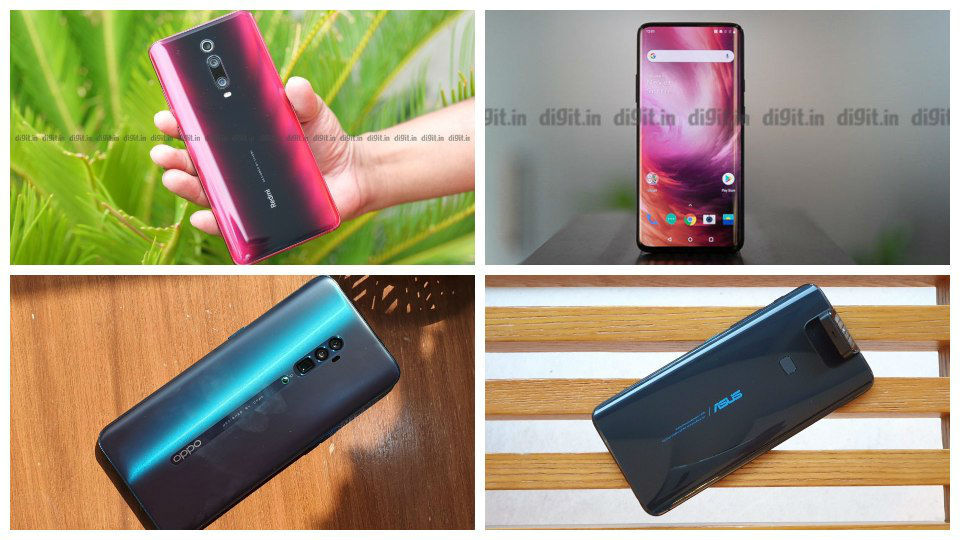 We recently published a spec comparison between a few phones that fall in the mid-segment market. Today, Redmi has launched its much-advertised K20 Pro (Review) and the K20 in India today. With a price starting at Rs 27,999, it has now become the most affordable phone with the Qualcomm Snapdragon 855 processor. Since, the Indian market has already seen phones, like OnePlus 7 Pro, Oppo Reno 10X Zoom and Asus 6Z, featuring this flagship processor, in this spec comparison, we are pitting these phones against each other. We’ll be doing an in-depth performance comparison later, and through our tests we’ll check about the company’s claims of the Redmi K20 Pro being the “fastest smartphone in the world.” This spec comparison may help you zero down a phone if you are looking to buy a device powered by Qualcomm's flagship processor. 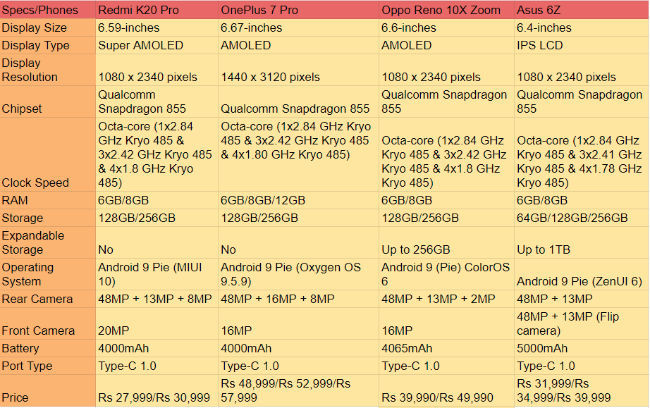 The Redmi K20 features a 3D curved glass back and is equipped with a 6.39-inch Full HD+ Super AMOLED display with 1080 x 2340p resolution. Both front and rear panel of the handsets are protected by Gorilla Glass 5. The phone is claimed to have 91.9-percent screen-to-body ratio and an in-display fingerprint sensor. In comparison, the OnePlus 7 Pro features a metal build sandwiched by an all-glass design. Both the front and rear panels are protected by Gorilla Glass 6 and 5 respectively. The handset sports a 6.67-inch fluid AMOLED display with a QHD+ resolution. The display is rated A+ by DisplayMate, sports pixel density of 516 PPI, is HDR10+ certified and has a 90 Hz refresh rate.

The Oppo Reno 10x zoom features a Full HD+ 6.65-inch AMOLED display with a resolution of 2340 x 1080 pixels. Thanks to the shark-fin type front rising camera, the phone is claimed to deliver a 93.1 percent screen-to-body ratio. The display is protected by Gorilla Glass 6, and the phone sports a sixth-generation in-screen fingerprint sensor. The Asus 6Z comes equipped with a 6.4-inch IPS LCD notch-less display and delivers a 92 percent screen-to-body ratio. The display with 60Hz refresh rate has over 600 nits of advertised brightness with 100 percent DCI-P3 colour space coverage.

All the phones that we have shortlisted here are powered by the Qualcomm Snapdragon 855 mobile platform. In K20 Pro, the company has introduced the second generation of its Game Turbo technology, which is said to enhance gaming, network, touch response and visuals while gaming. The mode is also said to enable better sound and in-game chat optimisation. OnePlus 7 Pro was the first phone to be available with the latest Qualcomm chip when it launched in India.

Just like the K20 Pro, the Oppo Reno 10x Zoom is equipped with HyperBoost 2.0 acceleration engine for an optimised gaming experienced, and Dolby Atmos support. The HyperBoost 2.0 includes GameBoost, SystemBoost, and AppBoost that brings performance improvements in terms of game experience, system speed and APP opening speed, respectively. The phone features a copper tube liquid cooling tech for heat dissipation. Oppo says that the tech includes a combination of Thermal Gel, a Graphite Sheet, Copper Pipe Liquid Cooling, and a Tri-cooling Control to manage the temperature of the smartphone. As mentioned above, the Asus 6z also features Qualcomm’s flagship Snapdragon 855 processor.

In terms of optics, the Redmi K20 Pro comes equipped with a triple rear camera setup. There’s a 48MP Sony IMX586 sensor, which is paired with an 8MP telephoto camera that offers 2x optical zoom, and a 13MP ultra wide-angle lens. The main camera supports laser autofocus and dual-LED flash. The two phones can also capture slow-motion video at 960fps and record 4K video at 30fps. The Redmi K20 Pro can record 4K video at 60fps. There’s a 20MP front camera housed in a pop-up module and the module’s lens is protected by Sapphire glass.

The OnePlus 7 Pro also sports a triple rear camera setup with the 48MP Sony IMX 586 sensor. It is paired with an f/1.6 aperture lens with a custom-made 7-element plastic lens. This main sensor supports OIS and EIS, and is supplemented by an 8MP telephoto lens that offers 3X zoom and also a 16MP ultra-wide lens. On the front is a 16MP sensor.

The Asus 6Z, however, has a flip camera that swivels to double up as a selfie shooter. In Asus 6z, the whole module, which is made of an amorphous alloy that Asus calls “Liquid Metal”, flips and enables users to control its angle. The camera module houses a 48MP Sony IMX 586 sensor, and it is paired with an f/1.79 aperture lens. There is a secondary 13MP ultra-wide camera with 117-degree field of view.

The Redmi K20 Pro is backed by a 4000mAh battery with 27W fast charging support. The company calls it SonicCharge, and claims that the device can be charged to 58 percent in 30 minutes. The Redmi K20 series of handsets feature P2i splash-proof coating, dual-frequency GPS, a headphone jack with a DAC that is Hi-Res audio certified, and a 0.99cc speaker box. The Oppo Reno 10x zoom houses a 4,065mAh battery with VOOC 3.0 fast charging support. It runs Android 9 Pie-based ColorOS 6 and has an AI-powered Breeno virtual assistant.

OnePlus 7 Pro houses a 4000mAh battery with Warp Charge support. The phone also features improved haptic feedback, thanks to a new vibration motor and runs on OxygenOS 9 on top of Android 9 Pie. The company says it has worked closely with Dolby to tune the speakers on the phone. The Asus 6Z features dual speakers which are paired with two smart amplifiers. The phone runs custom ZenUI 6 interface that is baked on top of Android 9. A 5,000mah battery keeps the lights on and in the box is a Quick-Charge 4.0-certified 18W charger.